It's the tears of team USA supporters falling into large puddles which continue to grow.

Angry Americans were back at it on Friday, heaping scorn on their northern neighbours after the Canadian men’s hockey team beat the U.S. team in the semi-final match at the Sochi Olympics.

Avert your eyes if the indignant use of profanity offends you but… on Friday afternoon, the hashtag #F***Canada was trending again on Twitter.

The same thing happened Thursday when the Canadian women's hockey team came from behind to initially tie up the final game, then beat Team USA for the gold in overtime.

LOL..what ever happened to Olympic spirit?

I know all about intense rivalry, but there is such a thing as being sore LOSERS.

One tweet from @5OClockShadow_ , shortly after the men’s victory on Friday afternoon, mocked Canada for its slower road to independence: “American independence in 1776 > Canadian Independence in 1982…and then technically 2004 #F***Canada.”

While @5OClockShadow_ is definitely right that Canada repatriated its constitution only 34 years ago, we’re not sure what that “2004,” reference is.

Another user, @c2etalon, informed the Twitterverse that some Americans were even taking their anger out on the environment: “My business partner is cutting all his maple trees down in his yard. #f***canada.”

There were, of course, users who entirely relied on some of the most played out Canadian stereotypes. One tweet from @cam_holl16 read: “I’m never wearing plaid again or eating maple syrup or being nice to people #f***Canada.”

Twitter user @schuch20 was quite direct in his disdain for Canada’s win, tweeting: “In all seriousness I hope Sweden wins by 7 goals on Sunday #f***canada AYE.”

And then there were those who simply used the #f***Canada hashtag to release some bottled-up anger.

Trust me there is much worse being posted in regards to that Hashtag.

Us Canadians had fun with this too though as we are known for our witty humor, including myself who spent most the day trolling on Twitter while watching the game at work and reading the back and forth vitriol. Damn I love Canada!

And @sarahbuehner proposed that maybe everyone was just a little confused: “Maybe the hashtag is meant to be used like: holy #f***Canada is the best country ever.”

While Friday’s Twitter war was certainly entertaining, some of the most intense #F***Canada tweets came after the U.S. women’s hockey team lost to Canada on Thursday.

A tweet from user @_Kalls read after the game read: "If you aren't upset about this game, you can just go ahead and pack your bags and move to Canada because we don't want you. #USA #F***Canada"

That one earned plenty of "favorites" and retweets – and some fairly angry replies.

And ‏@KevinTurley vowed to take out his anger on his pancakes: “Just threw out all of the MAPLE syrup in my house #f***canada”

Prime Minister Stephen Harper and President Barack Obama had a bet on this game too...

Even Prime Minister Stephen Harper and U.S. President Barack Obama got in on the rivalry, albeit on more friendly terms. Following the Canadian men’s 1-0 win over the U.S. in the semifinals Friday afternoon, Obama now owes Harper two cases of beer.
The pair bet two cases of suds – one for each Canada-U.S. Olympic hockey matchup – at the leaders’ summit in Mexico this week.

And of course, the only bet that counts... 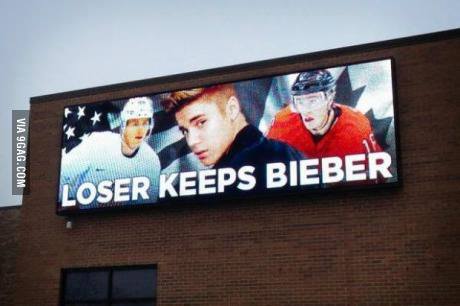 ... pardon my arrogance, but damn if I don't love it when we whoop some whiny yankee derriere once in a while.


Dang that seems like a whole lot of commotion over something so trivial but that's Twitter for ya.

I wonder who Bieber was cheering for?


... pardon my arrogance, but damn if I don't love it when we whoop some whiny yankee derriere once in a while.

No doubt my friend. It's not very often we get to rub their noses in it so to speak.

My opinion is that after today's win they would have become a bit more modest, but it appears that today's game only fueled the fire. I have never seen so many Americans say "GO SWEDEN!!" before...


I wonder who Bieber was cheering for?

I would like to Belieb that he was cheering for Canada.


First off its not our fault that we have the best players in the world on team Canada, when its your sport you have to show up.

The American team is good, but not good enought. The americans got away with alot of things. You should be proud that your team did so good. Remember it was NHL vs NHL... Our players are just better.

Also if americans are going to attack our independence... remember this Yanks....


WE BURNED YOUR WHITEHOUSE DOWN IN 1812. hahahaha

Its just a shame how americans are such poor losers. They dont like it when another country is better then "the best country in the world"

posted on Feb, 21 2014 @ 06:33 PM
link
Well I wasn't angry about the games since the women chocked and the men just got out played... But I didn't know about the bieber bet.
The game was a fix and the Putin was in on it, he would love to stick USA with beibs

Prime Minister Stephen Harper and President Barack Obama had a bet on this game too... 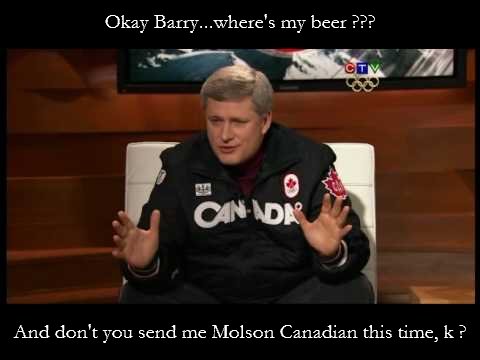 that come from behind win has got to smart

I hope Obama sends him some Old Milwaukee or some other disgusting beer.

Near beer would be the best though...send Stevie some .05% brew...that would be perfect.

Well with motivation like that, its no wonder the men's and women's teams got their asses handed to them by our Northern neighbors.


That game was intense, I thought USA had it for sure...

To be honest I don't really follow the women's hockey but I did this time around and glad that I did as I got to watch a very good game, both teams played well but as you said that must have sucked if you were cheering for USA only to watch them squander their lead.

They didn't think that one through very well


Woah don't sell the team short... Womens was doing the handling till they changed the strategy of how they were playing for the 3rd period
The mens was 1-0... Hardly an ass handing. Goalies duel and one got past quick... know the total shot count was 68, if we go down the middle that is 33 saves for quick. That is nothing to look away from. I want to say his save count was higher but don't quote me.

That all being said the canadian goalie was better.

Hours after Team Canada’s men’s hockey team shut-out rival Team USA to move on to the gold medal game, Alberta’s provincial government officially allowed establishments to start serving liquor, as the puck drops in Sochi on Sunday.
The game is set to begin at 4 p.m. (local time) in Sochi – or 5 a.m. in Alberta.
Early Friday afternoon, hours after Team Canada secured a spot in the gold medal final – and while thousands of Albertans likely realized what time the game started live on Sunday, Premier Alison Redford turned to Twitter to announce the special, one-time, change.

The Alberta Gaming and Liquor Commission confirmed the change a short time later.
“We appreciate the outpouring of enthusiasm of Albertans who want to gather to watch the game on Sunday and will support licensees to serve liquor when the puck drops,” AGLC President and CEO Bill Robinson said in a statement.
The AGLC said all licensed establishments are authorized to start serving alcohol at 5 a.m., and there was no requirement to apply for a change.

It is a big rivalry though.


Thank you for the congratulations.

It certainly is a very big rivalry, and it really sucks for us Canadians when you beat us at our own game.

It does happen from time to time


Maybe Bubbles, or Mr. Lahy can be the official Team Canada mascot for the next Olympics!

That would be hilarious.