The first so-called “smart gun” has hit the shelves at U.S. retail outlets, including one of the biggest firearms stores in California, according to the Washington Post.

The Smart System iP1, a .22-caliber pistol made by the German gun-maker Armatix GmbH, can only function with an accompanying wristwatch, which is sold separately.

When the RFID-equipped watch is activated by a PIN number and placed near the gun — like when a shooter grips the handle — it sends a signal to unlock the gun and a light on the back of the weapon turns green, according to the report. Otherwise, the firearm stays locked and the light on the back remains red, it stated.

The pistol sells for $1,399 and the watch retails for another $399 — more than double the cost of .40-caliber Glock handgun, according to the article.

The company is betting that demand for the technology will increase as consumers seek guns modified for safety. 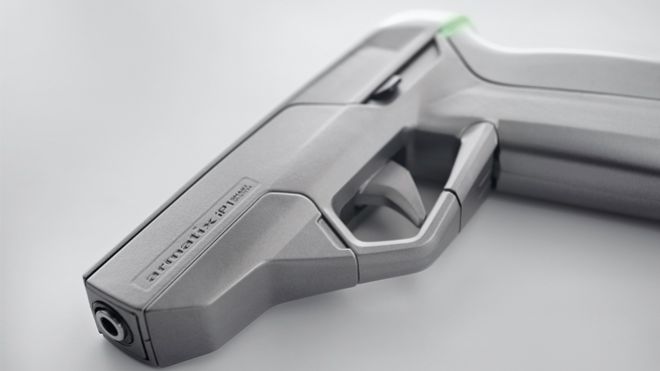 I sure hope this is not the future of weaponry. It just sad.
edit on 21-2-2014 by network dude because: added picture

Anything to keep the undesirables from arming themselves.

Ban so-called "Saturday Night Specials" (inexpensive guns), institute a permitting system that along with mandatory training equates to a months pay or more, mandate useless bells and whistles like we see here.....

If it helps keep the poor classes from obtaining firearms it's a solid plan.

posted on Feb, 21 2014 @ 07:49 AM
link
So everyone seeing you with this wristwatch on will know you have a gun. This puts people without a watch at more risk of getting robbed. Seems someone could make a bundle selling lookalike watches.


Not to mention the fact that if someone breaks into your house, now you have to take the time to grab the watch and key the pin number in to defend yourself.

posted on Feb, 21 2014 @ 07:55 AM
link
On the conspiracy side, is it even remotely possible that this gun could be rendered inoperable by some "remote source"?

Snarl
The idea will last only until the first hacker disables it. What are you guys worrying about?

Doubtful. Microstamping was defeated the moment it was introduced as a thing.

Hasnt stopped any politicians from supporting it. It's the law of the land in CA and consistently proposed in other states year after year.

Anything to keep the undesirables from arming themselves.

Ban so-called "Saturday Night Specials" (inexpensive guns), institute a permitting system that along with mandatory training equates to a months pay or more, mandate useless bells and whistles like we see here.....

If it helps keep the poor classes from obtaining firearms it's a solid plan.

What part of SHALL NOT BE INFRINGED are you having trouble understanding?


even worse...if you wear a watch you might be a "terrorist".....that will be added to the list

But this seems like an idea that won't really do much, sort of like 3d television we don't use it but it's there for some unknown purpose. I doubt many people will buy it though.

What part of SHALL NOT BE INFRINGED are you having trouble understanding?

In the case of my quite obviously sarcastic post it would be the same part that Feinstein, Bloomberg, Romney, Schumer, Reagan, Pelosi, McCarthy, King, the states of CT, CA, NY, NJ, MA, MD, CO, etc..... have trouble understanding.

posted on Feb, 21 2014 @ 08:24 AM
link
Thats good for law enforcement, not for the average person protecting themselfs.

I don't see this tech making any big splashes in the industry. Nobody that is truly arming themselves for security would want this....good idea but poor execution in my opinion. I would not want a battery powered gun that only works with a battery powered watch...way too many points of failure in this system for it to be a viable means for protection. I certainly wouldn't trust my life to this.

posted on Feb, 21 2014 @ 08:31 AM
link
This is one of the dumbest ideas ever. I don't even know where to begin. First it's only a .22. Better pray for a headshot. Second, it's THREE times more expensive than a glock 4 gen .40 cal. Third, you gotta wear a stupid watch AND accurately enter a PIN as fast as your nervous adrenaline filled fingers can before you use it( better hope you get it right the first time)
Fourth, it would be simple for the NSA, CIA, FBI,SWAT, or UN blue helmets to turn into an $1800 paperweight if there was a need to put down us peasants. (Though, if you're taking on a small army with a .22 you've got bigger problems.)
Probably don't even need to hack, an EMP would probably ruin the gun.

Anyone ever seen Office Space? This is worse than the jump to conclusions mat.
edit on 21-2-2014 by riffraff because: (no reason given)


A stupid solution with no problem to attach itself to.

What a waste of metal and time.

Will probably just be a status symbol for the owners. (some of whom will be deceased from trying to use it)


The concept is ok-ish, but it hasn't been thought out.

If you need to use a pistol, it's normally going to be in a rushed situation...if you're in bed, and are facing a rapist, burglar, or psychopath sneaking around your home coming to get you, you don't need to be trying to grab you pistol, searching then for your watch and thirdly trying to input a pin code into the (hopefully now found watch) with adrenalin shakey fingers...all while faced with a shocking and surprising situation.

A lot of people are probably going to die if they need to rely on these things for protection.

There's also not a lot stopping a thug from taking a conventional pistol, ripping off your watch and now useless pistol and forcing you at gunpoint to reveal the watch pin code.

Too much faffing about...if they worked on palm or fingerprint or even voiceprint technology, it would be better.

posted on Feb, 21 2014 @ 08:41 AM
link
Could be that the PIN can be entered and it stays active until turned off. If someone took the gun from your hand, they would also need the watch near by.

The answer is probably somewhere on the net.

If they want to make people safer they should disarm cops, not force this crap on law-abiding citizens. I would never own one of these ridiculous weapons.