Fifty-five percent of Americans reported in a new Gallup poll that they are dissatisfied overall with American gun laws and policies, an increase from 51 percent in 2013 and just 42 percent in 2012.

But the most dramatic rise in dissatisfaction comes from the contingency of Americans who feel gun laws are too strict, rather than from those who think they aren't strict enough. This percentage jumped to 16 percent this year, a rate that more than triples the 5 percent recorded by Gallup last year. Meanwhile, the percentage of Americans favoring stricter gun laws fell seven points in 2014, from 38 to 31 percent.

Im actually a bit surprised by this new poll. Here's a link to the Gallup website and a graph attatched. 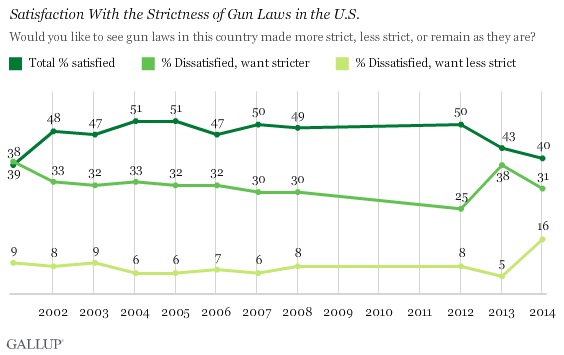 The percent that wants gun laws less strict actually triples since last year? I really didn't expect to see this.

Looking at the graph, things seems pretty evened out since 2002. Then things changed course in 2013. A flood of new gun legislation hit on the State level. After the all of the laws that were passed in 2013, (including both sides of the gun argument), this *may* be the outcome/response to those laws. I say *may*, since Im assuming there are more variables here, not just the new laws, but I believe the law part was a major factor.
edit on 1-2-2014 by buni11687 because: (no reason given)
edit on 1-2-2014 by buni11687 because: (no reason given)

posted on Feb, 1 2014 @ 02:56 AM
link
I think that part of this may have to do with the surge in gun permits and things of that nature that we've seen in the past year or two. People are finally realizing just what a pain it is to get a gun.


This doesn't surprise me one bit.

You'd start to seriously re-evaluate things if the local sheriff and his deputies starting looking like this........ 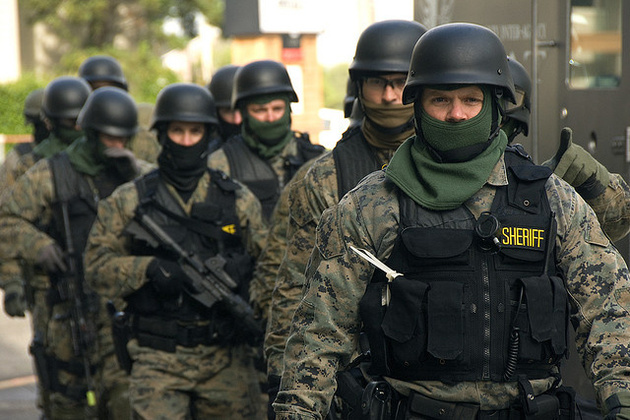 I firmly believe that a good percentage of American citizens understand what is happening.....your government is corrupt and the controlling Law Enforcement agencies are militarily equipped.

Thanks to the Patriot Act being signed whilst the American people were blind-sided by 9/11.

It is obvious that the US governments' Department of Homeland Security is armed to the teeth & they are not securing the "Homeland" for you - they are securing it from you. 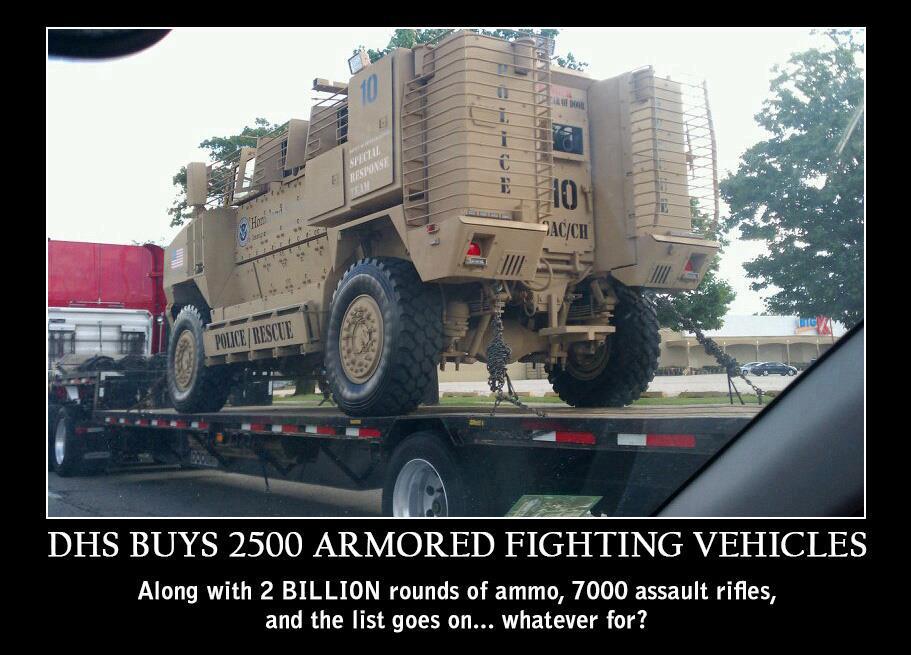 So, the poll does not surprise me, if restores my faith in the American people and their common-sense to see past the propaganda and lies and deception that their government has been perpetrating for decades.


This doesn't surprise me one bit.

Why they ask? Well they need to outfit the little embryonic brown shirt army! Plus they are a bunch of paranoid jack booting warps. Just look at big brother in the picture on the left. He and little whip boy sadomasochist needs them. Need to project power to the disgruntled.

posted on Feb, 1 2014 @ 04:54 AM
link
I think if the gun show loop hole was never available Americans wouldn't have half the issues they do currently with illegalally owned weapons.


We will continue to see this topic / people shift in mindset thanks to the very government who is trying to change it.

If our government actually acted responsible and not like the case of HeeHaw they might be able to make an argument. Since they opt instead to try and do an end run around the constitution, its going to make people even more suspicious of government and not less.

I think it should be a requirement that a person running for elected office demonstrate they meet all criteria to hold that office.

I think it should be a requirement that a person who runs for public office understand the Constitution.

I think the government should concentrate on cleaning its own mess instead of trying to tell the states how they should do things.

Finally, appoint special prosecutors for investigations. Using the DOJ in this administration to investigate criminal wrongdoing is like asking the SS to investigate Auschwitz.

Get out and vote people. Talk to your reps - hold them accountable. Fire them when they perform poorly.

posted on Feb, 1 2014 @ 07:58 AM
link
Aside from the anomalous post-incident hysteria the percentages have been steadily moving this way since the 1980's. Anti-gun hysteria peaked around then along with the crack epidemic. Since that time the numbers always move in favor of liberalizing gun laws.

The good thing about all the ban pushes of the past year is that people who didnt necessarily want a gun or care about guns figured they probably should get their permit/license/whatever or even just one gun sooner rather than later fearing that they may not be able in the near future.

Once that person saw all the fees, wait times, and requirements they suddenly shifted from indifferent to "WTF!".

posted on Feb, 1 2014 @ 10:15 AM
link
It doesn't surprise me. The longer-term trend has been in that direction for a couple of decades now. I think its simply a case of more people buying firearms and becoming exposed to the reality of it rather than the fear-mongering pushed by the media and the politicians. There may be a few temporary spikes like last year, but overall, I think that the trend against support for new laws is likely to continue.


LOL there is no such thing. The Marxists would tell u so but can't provide proof.

posted on Feb, 1 2014 @ 11:44 AM
link
Look at all the polls taken with government approval ratings and asking whether or not we are on the right track as a country, and then you have your answer.

People don't trust the government. It's that simple.


I really think the whole "citizens need to be armed to stop the government from going to far" idea is a pointless argument.

Citizens being armed doesn't seem to do anything at all to stop the government from doing whatever they want. They know they just have to bring in tighter laws one tiny step at a time and they can get away with it. You can get a frog to sit in a pan while you boil it if you only warm it up slowly.

posted on Feb, 1 2014 @ 02:47 PM
link
The polls are fake anyway. most anti gun polls are taken in high crime big cities and seldom in rural areas.

Some have been taken where only liberals were asked there views.

here is one trick question.
Rate the effectiveness of the Brady Bill and the Assault Weapons Ban:

Not at all effective:

AnIntellectualRedneck
I think that part of this may have to do with the surge in gun permits and things of that nature that we've seen in the past year or two. People are finally realizing just what a pain it is to get a gun.


That is EXACTLY the complaint I'm hearing these days. Too many people have believed the progressive line that, "Guns are readily available and too easy to purchase." ... right up to the point where they try to buy theirs.

Problem with their Sheople mindset is that they allowed all these laws to make their way onto the books. Once the laws are passed they are rarely (if ever) reviewed and removed. I almost lack sympathy for the Sheople who have waited this long to exercise their rights ... and I seriously doubt their will beyond spending some $$$ in following the current trend.

Kudos to the member who posted the picture of 'law enforcement' WITH THEIR FACES COVERED!!


You got that wrong. EVERYONE rural owns a gun.

Biigs
I think if the gun show loop hole was never available Americans wouldn't have half the issues they do currently with illegalally owned weapons.


The so called "loop hole" is only a loop hole in that the buyer is able to buy a gun without the government having any record of the transaction. That's all it is. They really don't sell illegal guns at those shows. I have seen Old Bill hanging around those shows and even doing off duty security at those shows.


These graphs are easy to explain. The reason things stayed so flat for the first part of the 2000 decade is because a Republican was in the presidency who had no desire to implement ANY gun control, so those issues stayed out of the news and out of the public's mindset. Then Obama took office and vowed to implement stricter gun control. Then in 2012, Sandy Hook happened, Obama jumped on the opportunity, scared the public silly with the idea of "big scary guns," and so the public wanted stricter gun control laws. When the emotions wore off, the public realized that most of the BS coming out of Washington about gun control was just that, BS and backed off on the gun control front. Notice that the line for people wanting stricter gun control laws has dropped back down to what it was pre-2012?
edit on 3-2-2014 by Krazysh0t because: (no reason given)


What is this gun show loophole I keep hearing about? I can tell you from personal experience having bought guns at gun shows they are all legally registered. I had no say in the matter. If I wanted to buy a gun from a licensed dealer, it must be registered to me. Period. The only way to get a gun not registered in your name is to buy a used gun from a friend, neighbor, etc. but no gun show is required for that.


Biigs
I think if the gun show loop hole was never available Americans wouldn't have half the issues they do currently with illegalally owned weapons.

The so called "loop hole" is only a loop hole in that the buyer is able to buy a gun without the government having any record of the transaction.

Not true. Whenever I buy a gun at gun shows I have to pass background checks and fill out about three pages of paperwork, just like buying a gun at any retailer. My guns are registered to me and I'm pissed about that ,believe me. But if you want to buy a gun from them you must register it.


I am always skeptical of polls. They can be skewed, twisted, lead and conformed to what the pollster wants to convey.

I would not be surprised if this poll truly does reflect the sentiment of the American People.
From talking with people as a whole, more and more people seem to be "waking up" and noticing all the crap happening as of late.

Hopefully this polls shows that there is a major positive change coming within our country. A change back to what the Constitution states.


If the Govt doesn't care, then why are they pushing so hard for more restrictive laws for firearms?