Little help with this Moon Photo?

posted on Jan, 30 2014 @ 08:53 AM
link
Ok, so i was watching RT.news yesterday and Mirosław Hermaszewski was talking..
what i noticed is this picture in the background? i mean that he has a photo of americans on the moon?
or is it something else.. are the two people in the photo related to the two under it?

Im not sure since i have no knowledge of all the astronauts and missions..

Can anyone help me out as to who they are..
Thanks.

This is the picture. oi61.tinypic.com...
and link to the video. rt.com...
around the 3:28 mark when they talk with Mirosław Hermaszewski


Umm.. Well that didn't work. I have no idea how to embed a video. lmao.. Sorry


@ OP - maybe it's my english...(haven't watched the video yet) but I didn't get the point you were trying to make with this thread ?

Can you dumb it down for me ?


You just copy everything in the url AFTER the =

posted on Jan, 30 2014 @ 10:17 AM
link
Well it certainly bears a striking resemblance to this picture of Apollo 17 astronauts Harrison Schmitt and Eugene Cernan practicing on a simulated lunar surface in Florida, albeit with a different background. 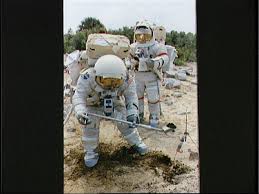 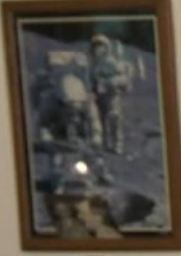 Have we stumbled upon something significant?


Wow, that is eerily similar. Stumbled is a very key word here. Can't wait to hear others weigh in on that one. THAT was a nice catch


Could it be that this was the pose that was requested while on the lunar surface...staged in a sense that they wanted pictures taken in certain poses?

It has an uncanny similarity. Not sure there is enough detail in the face, under the mask, to do any kind of further analysis.

It is also possible they practiced the very formations for the moon walks, and recorded that also. But, do you really practice for how to exactly approach, as a team, a four foot mini-crater?


I would dare say they are the same.

Now, is there a source of that pic on the wall...

posted on Jan, 30 2014 @ 12:47 PM
link
Could that image on the wall be artwork that is based on the training image (using the training image as a base model for the artwork)? Former astronaut Alan Bean is known for his Moon astronaut artwork, and often uses actual images as a guide/model for his paintings.

It's hard to tell, but it seems to possibly have an artwork quality to it, plus it is a picture of TWO astronauts (i.e., not taken by an astronaut on the moon). I realize that there are some videos showing two astronauts taken via the remote-controlled TV camera, but that's the only way this could be taken on the moon.

I looked through Alan Bean's artwork, but could not find a match. Maybe it was a print of artwork by Bean that I can't find online, or maybe artwork made by someone else, again using the training image as a model for the artwork.


Whats really sad about this place you only have to find one picture that looks strange to raise suspicions about Apollo being hoax but if you try to PROVE it with pictures every one shown has to be proved genuine .


Well now that certainly is most interesting ,I am going to have to do some digging on this one now,just before my grandfather passed away he burned me a disk from the computer that he must have found interesting or knew i would it was called a funny thing happened on the way to the moon, and it was explaining how the moon landing could have easily been faked and that something happened on the way there that they are not telling us that prevented them from landing and that they didn't actually make it and they had to turn around and make it look like they went because the Russians actually did make it and they the Americans couldn't. And didn't


That is actually very possible and alot more likely than the faked moon landing proposal and i never even thought of that but you may be correct it is just a piece of art,I'm still hesitant to say yay or nay if the moon landing was real or faked but if it was faked by the Americans, I still belive the russians made it there and that's why they faked it didn't want to be behind in the space race .


Bears a resemblance, but it is not the same photo. The astronaut in back is turned at a slightly different angle. You can see that his shoes and legs are placed in different positions, and the red stripes on his pants legs are a different distance from each other.

And if that's a moon photo, was it taken from the dune buggy? Was there a camera on there. Similar pics, but not the same image.

Josephus
Well it certainly bears a striking resemblance to this picture of Apollo 17 astronauts Harrison Schmitt and Eugene Cernan practicing on a simulated lunar surface in Florida, albeit with a different background.

Have we stumbled upon something significant?

Recognised the style as soon as I saw it.