SHERBROOKE, Que. — A kitten named Polo nearly went through all of his nine lives when he was found frozen in the ice, standing up.

An animal shelter in Quebec's Eastern Townships is slowly nursing the eight-month-old feline back to health.

Polo had to have part of his tail and ears amputated after children found him in frigid temperatures on Christmas Day in Sherbrooke, Que., two hours east of Montreal.

It's unknown how the cat got itself in the predicament.

His legs were very swollen due to frostbite.

"When he was found, he was almost dead," said Cathy Bergeron, spokeswoman for the local SPCA. The family took Polo into their home and warmed him up by the wood stove before calling the SPCA. Polo has undergone several operations since Christmas, but is now recovering. The owner isn't known, so the kitten will be ready for adoption as soon as he regains his strength. 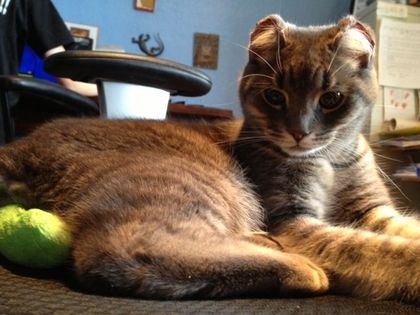 posted on Jan, 10 2014 @ 12:32 PM
link
Stories like these make me humble how there are some compassionate human beings out there who care to save the life of an innocent animal.

With the frigid cold winter and polar vortex swallowing everything in its path, I am very happy to hear the news of the saving of life of this cute little kitten.

posted on Jan, 10 2014 @ 12:36 PM
link
Although there aren't a lot of details in this story, unfortunately my first thought was that someone did this intentionally. How sad is that?

I truly hope that wasn't the case, and am so happy he was found and rescued. Hope someone gives him a great home and a great life.


This is a breaking story...so it hasn't gotten a lot of attention just yet...wait and see

Note: this is a story that was told to the press by the SPCA. So it could be viewed as an advertising ploy to get people to adopt animals at their local SPCA at the same time a message to home owners not to let your pets outside.
edit on 10-1-2014 by Skywatcher2011 because: (no reason given)

MrCasas
Did Someone cut it's ears or did they grow like that?

It's ears may have been exposed to frostbite? Otherwise it could be their natural form. 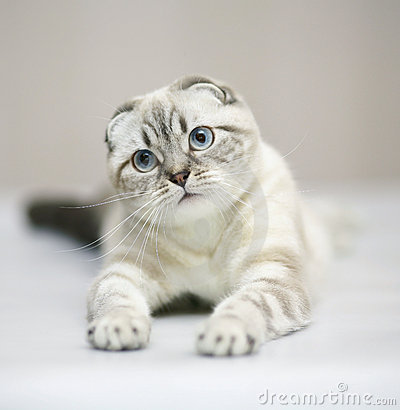 posted on Jan, 10 2014 @ 01:35 PM
link
I'm a straight up animal lover so to hear about a poor, cute kitten stuck to the ice in the cold made me sad. I'm glad the kitten was saved. I definitely would've saved the poor thing if I seen it.

posted on Jan, 10 2014 @ 01:36 PM
link
I love a happy ending! Thanks for sharing this, OP. It stated that the part of the ears were lost to frostbite. The kitty is lucky they were able to save his feet. Cats are incredibly tough creatures, but still, they're mortal, and severe cold like that would easily have killed him.

I'm a little concerned about the fact that his feet were stuck. It may be possible that somebody wet his feet and threw him out there. One paw or two, I can buy. But all four? It's suspicious. There are some sick individuals who think that cruelty to small helpless animals like this is funny.
edit on 10-1-2014 by FissionSurplus because: proper gender identification

MrCasas
Did Someone cut it's ears or did they grow like that?

Polo had to have part of his tail and ears amputated after children found him in frigid temperatures on Christmas Day in Sherbrooke, Que., two hours east of Montreal.

per the link in the OP.


I agree with you, I have seen it personally.

But on the other hand, the saying: curiosity kills the cat, is also very valid. I have seen cats really do some stupid things.

But whether it is kitty stupidity or human maliciousness, we will never know.

The world is running short on cats....rabbits....dogs.....and hamsters.

I love animals. Stories like this make me smile.


Even though this one lost part of its tail and parts of his ears to frostbite, it still ends up with a happy ending, kinda.

Every year in the U.S., an estimated 6 to 8 million lost, abandoned, or unwanted dogs and cats enter animal shelters.

Approximately 3 to 4 million cats and dogs—many of them healthy, young, and adoptable—must be euthanized in animal shelters every year.


At least 50% of them don't make it. I'd be curious to know how many of them are not registered in those numbers.


I don't knock people who want their pedigreed pets because I've wanted one myself, but I also have three rescue cats at the moment.

One was a young female who was barely a year old when she showed up outside our apartment complex with the local colony. She was on the outskirts and at the same time, you could tell she was at least partially socialized because she would come up to you and almost let you touch her. To make a story short, she decided at some point to "adopt" us and began breaking her neck to get in our door whenever we opened it and she was around. We took her in and found out that she has a "unique" attitude. She's not exactly cuddly although she has gotten to where she liked laps and being patted occasionally.

One was a kitten at a pet store who was adopted from a small town animal shelter. We are told she's half-Abysinian. She certainly has the proper ticking on her coat for it. She climbed the inside of the cage and grabbed my husband's coat sleeve and he went, "D'ahhhh."

The last and most recent is a pure bred Ragdoll. He's already on his third home. Poor guy was declawed on all four feet before he found his way to us. You know how you expect all hell to break loose when you introduce a new cat to the colony? It can take weeks for things to settle down even with proper introduction practices. It took three days for our three to get comfortable with each other. Three. I'd never had an into go so smoothly. He was clearly meant for us.

But knowing all that, I still want a Maine Coon someday, either rescue or kitten. It'll be a long time though. This lot is all under 10.

I just wish more people took the time to give shelter and rescue pets a chance and made for room in their lives for at least one alongside their pedigrees.