Is this the hardest place in the world to visit?

Whoa! You wouldn't want to be washed up here ladies and gentlemen. Seems you might be thrown on the BBQ. 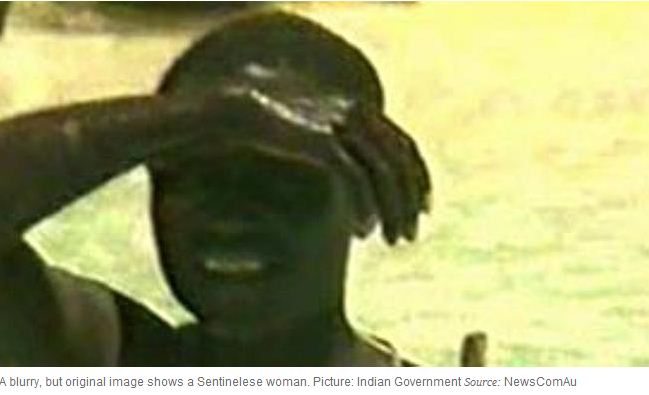 DON'T expect to be greeted with a smile if you attempt to visit this island - you'll be lucky to make it out alive as spears and arrows fly towards you.
North Sentinel Island, part of the Andaman and Nicobar Islands which is a group of 572 islands in the Bay of Bengal between Myanmar and Indonesia, could be the hardest (and perhaps least desirable) place in the world to visit.
The locals who live here just don't like visitors ... and never have.
Rare footage release of lost Amazon tribe
The inhabitants are a tribe of Sentinels said to be direct descendants from the first humans to emerge from Africa. It's estimated that they have lived in the Andaman Islands for up to 60,000 years, but the fact that their language is so different even from other Andaman Islanders suggests that they've had very little contact with the outside world for thousands of years. 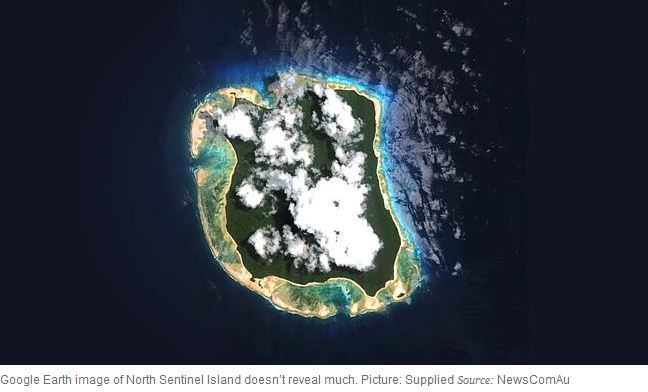 Today it's estimated that there are between 50-250 residents that call North Sentinel Island home.
The Sentinelese don't like anyone entering their land: Regardless of whether you come bearing gifts, as a fisherman, as a journalist, accidentally get shipwrecked on the island, or come wanting to help, you'll be met with hostility.
No-one has ever left the island without running for it ... or being killed.
In the days following the shocking 2004 tsunami (that hit the Indian Ocean), a group of people on an Indian Navy helicopter reached out. They didn't have much hope to find survivors - it seemed implausible that the Sentinelese could have survived, living on such a remote island directly in the tsunami's path.
Optimistic and wanting to help they dropped food parcels onto the land, and were met with a sole Sentinelese warrior, who emerged from the dense jungle with a bow and arrow and shot at the helicopter.
Even after such a drastic, horrific event, the Sentinelese did not want help … they did not wish to have any further human contact.
Thanks to technology, today anyone with access to the internet and a computer can check out never-before-seen places from above using Google Earth.
Expert used google Earth to find 'lost' tribe
When you look at North Sentinal Island you can only see an old shipwreck still stuck on the reef. Anything to do with the Sentinelese - homes, lives, people - is hidden in the dense jungle.


Those who have visited have either come back terrified, or not at all.
In 1880 a large British group landed on the island, but it took them days to make contact with the natives. After several days they found an elderly couple with four small children, and took the group to Port Blair. The elderly couple were not able to survive and died, perhaps after being exposed to Western diseases, after which the children were returned to the island with presents … quickly.
Indian authorities have been attempting to make peaceful contact since 1967, but have always been met with bows and arrows, and in 1974 a film director even took an arrow in his thigh. In the 1980s government-sponsored groups left gifts on the island, but quickly left. 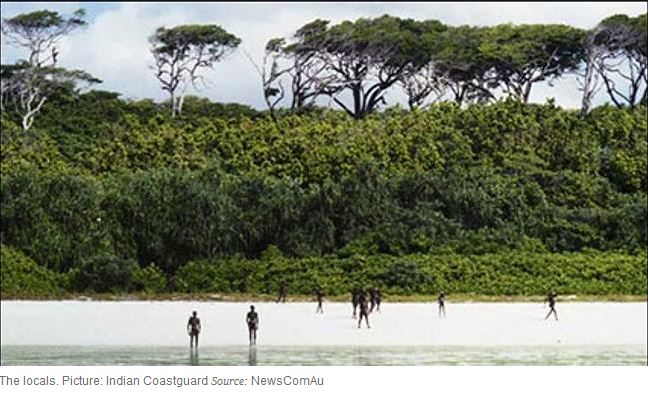 Unintentional visitors too, have never been welcomed, whatever the circumstances. An escaped convict who drifted to the island on a raft in 1896 was killed there. His retrieved body was punctured by arrows and his throat cut.
A Hong Kong freighter, called Primrose, became stuck on the island in 1981. After a few days armed natives descended on their ship. The captain made a distress call and the crew were flown to safety.
The last recorded contact with the Sentinelese was in 2006. Two fishermen were killed fishing illegally within the range of the island.
Today the Indian government has backed away, altering its policy to no longer attempt visits, friendly or otherwise. It's now recognised that the Sentinelese have the right to live as they wish - which in this case is obviously away from the rest of the world.

speculativeoptimist
+6 more
posted on Jan, 6 2014 @ 02:50 AM
link
I hope there will always remain places where the wild things are, untouched and unspoiled by modernism.
edit on 6-1-2014 by speculativeoptimist because: (no reason given)

Now that is funny, but they are not the same. N Korea has been touched by modernism whereas that tribe is one of the few cultures left that remain wild and I think that is worth honoring and preserving. Don't you?

I just think the welcoming party is a little extreme?? Don't you?

A little window to how we used to be.

And they say killing isn't natural......


These guys do it before you reach the beach!

posted on Jan, 6 2014 @ 03:15 AM
link
I have been to Andaman & Nicobar islands as part of projects for my old company in India.
it is restricted for civilians to travel to some of the islands where the indigenous populations live, especially the Jarawas & Sentinelese.

While travelling for the 1st time to Port Blair, the other travelers sort of scared the daylights out of me my telling tales of the tribes and cannibals etc. It is reported that the Jarawas practiced cannibalism.

I have only been to Port Blair on the Southern Andaman island where we had projects for developing infrastructure.

Yes, untouched by our values and politics and our way of life. The VIRGINS of the earth should remain as such. We have ruined SO many..... the Eskimos, the Native Americans, the Mexicans. Please LEAVE THEM ALONE! I watched a documentary once, can't remember what or where, but a white gal was doing the hula in front of African men and they were salivating and had big grins. Whatever, we all have animal instincts but why should people pollute others?


Definitely, the fact that no-one has really been there makes me want to go there all the more!

We need to invent invisibility before we can watch them I think.


Very interesting read, thanks for sharing.

I'd be more interested to see how far they have come along in civilization since they have been barely 'touched' by the outside world.

Would love to see how they manage their houses, what tools they use...
Medical care, cooking.

Really fascinating, just makes me wonder why they are so hostile? Is it in their DNA?


Thanks for sharing, I hadn't known about these people.

I wonder what they did with the gifts, do they reject them, or take them..

posted on Jan, 6 2014 @ 04:18 AM
link
And then researchers wonder how did our species of hominids manage to rise above the others.


This place must be a puzzle for Christians, who have been instructed in the bible to preach their gospel before the entire world before Jesus makes his unappointed rounds again. These islander folks nor their ancestors have never heard of Christ, so they may be single-handily holding back his return - I can just see Jesus waiting in the wings for thousands of years, twiddling his thumbs, reading old issues of "Omni" magazine, looking to see if a brave (read foolish) missionary boats in to preach the gospel while wearing an arrowproof grizzly-suit and hoping he can learn and speak a language that non-residents have never heard and lived to tell about.

Thanks for the thread, this story is new to me. And talk about inbreeding!


Thanks for the thread, this story is new to me. And talk about inbreeding!

Oh gosh, I haven't even thought of that!
They must all be kissing cousins.

It was fashionable 40 years ago during my BA program . . . for budding anthropologists to visit the Dineh Reservation [Navajo] . . . and pontificate at great length similarly.

However, said budding anthropologists did not have to live on dirt floors, with no running water, no sanitation, subsistence survival, no medical care, . . . living at the manipulative terror of unscrupulous and scientifically ignorant shammen . . . . etc. etc. etc.

It was all quite vogue, cool, 'erudite' to blather at length about the "noble savage" deserving to be left alone.

And, there is a certain attraction to that perspective.

However . . . said budding anthropologist mothers never had to worry day in and night out about no medical care for their hurting child racked with an incurable fever . . . that a simple medicine would fix.

I too have a soft spot in my thinking and heart for tribal groups untained by evil modernity. But I recognize that such lack of pollution from modern evils comes with a lot of stark costs to the individuals concerned.

posted on Jan, 6 2014 @ 05:15 AM
link
Honestly the saddest part of all of this, even without the rest of the world interfering with them; It is only a matter of time before they die out. This will not be to lack of resources or med's, it will be due to inbreeding causing more and more issues in the community.

I do love the fact that they do not welcome outsiders, the second they show weakness and let someone tour the island will be the downfall of their society as a whole.

Anyways, I'm glad these places still exist. We're so modern that we can be anywhere in the world in a day or so. It feels like everything has been explored, everyone walks around with the entire knowledge of the world in their pockets (Wikipedia on their phone for example) that there's just no more "mystery" left it feels like.

If I could, I too would chuck spears and shoot people with arrows dare they enter my domain. Hehe, especially Jehovah Witnesses! (Sorry, had to.)


Just mentioning what I first thought of when I read the OP. Here we are in the telephone/electricity/radio-television/internet age (and that's pretty much how historians in the far-future will define the communication leaps which have occurred in the last 130 years), and yet this island is like a separate world unto itself. Thus any meme which is based on reaching every person in the world meets a firewall, and the only way to breach it is to get bow and arrowed for your trouble.

And what do they eat??? Tree fruits and nuts? Root vegetables?