A day after Foreign Affairs Minister John Baird confirmed Canada is extending its Arctic territorial claim beyond the area mapped by federal scientists, Putin responded with a highly visible message to the Russian military.

In televised comments at a meeting of military officials, Putin said Russia needs to have “every lever” to protect its security and national interests in the high Arctic.

As the poles melt quicker and are uncovered longer, this will be more of a hot button topic.

I believe the US will lobby us to put pressure on the Russians because America would want some say in the large majority of land that potentially has lots of oil, and lots of land for possible future missile defence shield.


Isn't the North Pole migrating to Canada in a slow pole shift anyways? Or is that the Magnetic, not True north?

But there are supposed to be a lot of resources under that ice. Also a lot of Russian Nuclear waste as well. They use it as their dumping ground.

posted on Dec, 10 2013 @ 02:01 PM
link
Just a bit to add here, but I've been loosely following this in the news for years. Putin first made this issue publicly known as being important for him when he directed a Russian submarine to drop a Russian Flag in symbolic claim to Arctic resources. (there is *A LOT* to drill for within the Arctic Circle..and he wants it)

There is a thread here not too long ago about Putin also reopening one of their Cold War era Arctic bases with what was an absurd show of Naval power to escort a routine issue like that.

I think passage through what may be open water more and more into the future is part of it. (Panama won't be happy) but it's what lay beneath the Arctic sea bed I think it's ultimately about. Russia scoped that out many many years ago by what their actions say.


Canada is claiming the North Pole? Just in time for Christmas, taxing all those toys and elfin labor. But if they claim the North Pole, I would think other countries might have a problem. The poles should be like the Moon, everyone and no one owning them.

Also a lot of Russian Nuclear waste as well. They use it as their dumping ground.

they use northeast coast of Finland for that..

Is Russia looking to get Alaska back? To me that is the goal.

They are steamed their corrupt leaders sold it illegitimately.


Santa better check his compass, because the North Pole is shifting—the north magnetic pole, that is, not the geographical one. Over the past century the pole has moved 685 miles (1,100 kilometers) from Arctic Canada toward Siberia

This will come down to mediation by the U.N. and I believe both countries will be stuck with the same 200 mile water rights that the rest of the world has.

Under the UN Convention on the Law of the Sea, a nation can claim up to 200 nautical miles of seabed beyond its territorial markers. A country can demand 350 nautical miles if it can prove a natural extension of its land area. The UN requires comprehensive mapping evidence to justify any declaration of rights.


Alright no fighting over the North Pole, that belongs to Santa. As for the rest I think I have a solution. How about this? 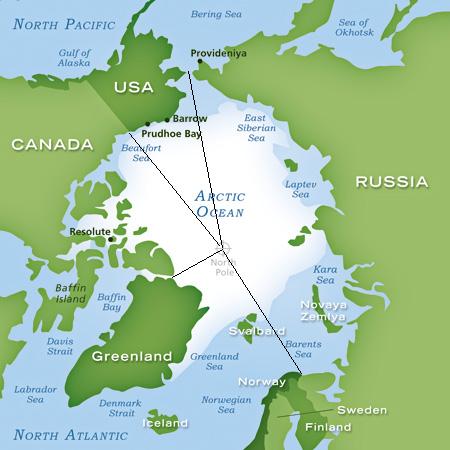 
I think the Russians will find us Canadians more than willing to defend the north, this is the great white north after all...

I'm ex forces, and I know this is a high priority and one talked about a lot.

They are not the only cold weather force ready and available lol. Our infrastructure has this well in mind.


This is an on going and unethical debate between the major powers, the polar regions were accepted as international territory for a very long time and that was a good thing as they are more important to the climate of the world than they are given credit for, now we have in both that arctic and Antarctic a race to exploit the untapped assets and this will actually harm the planet not simply lead to international disputes but if the proof is in the pudding I would rather Canada gain control for the simple reason that Russia has shown its disdain for the ecological importance of the arctic region in the manner it dealt with the green peace activists.
There is going to be a major accident there and even if they can exploit the assets it does not mean that they will in any way be ready to deal with even a minor spill in the arctic, sadly greed moves in and reason and logic fly out the window.


You are speaking for yourself. We will not be getting into any wars with Russia anytime soon.

I believe the problem is that the N Pole that was our territory is wandering their way more.

Nonetheless, maybe they should stop thinking it can be owned, and share it.

You know a little diplomacy with those good looking Russians.

posted on Dec, 10 2013 @ 04:58 PM
link
I'm a little sick and tired of satanic freaks running this world. There shall be no more wars. Mom spoke. Period. And she outranks all generals in the universe. All mothers do!

So instead GET ALONG!

I think that would be inviting a little too much trouble. We definitely don't want them involved if it can be avoided.

Maybe the north pole will be like our border at parts of Alaska and also Hanz Island, where everyone involved just kind of shares...... Or agrees to disagree.....


The problem with dividing it is that the north pole is actually international ocean and though frozen is not a land mass, it belongs to no nation except perhaps the Inuit and they are present in all associated territory's, should any side demand control then it would amount to an international exclusion zone which is a military action and not a legal peacetime action though whom controls the international courts.


The US will love you!

You just granted them the largest, known oil reserve under the ice.

United Nations Convention on the Law of the Sea


And the UN will stop him with what army?


They don't have to stop him, Russia is a signatory on the treaty (well, the Soviet Union was, I presume there is something that ties Russia in,) so they can't claim sovereignty over international waters. If they were to take an action to do that, they would be up against every other country who is a signatory, including the US. And no, the other nations would not allow the treaty to be broken, read the text of the treaty to see why.

ETA: oopsies, I see that the US did not sign the final agreement.


Putin, just laughed and probably put you on his "arrest list" for homosexuals for the "attractive russians comment." he's almost that insane.

Everyone know's Putin Assassinated Santa Claus and absorbed his all seeing powers.

If Putin wants to fight canada for the geographical north pole, let him. Canada has an Ice bridge, Russia will have to fly or ice break it's way in.