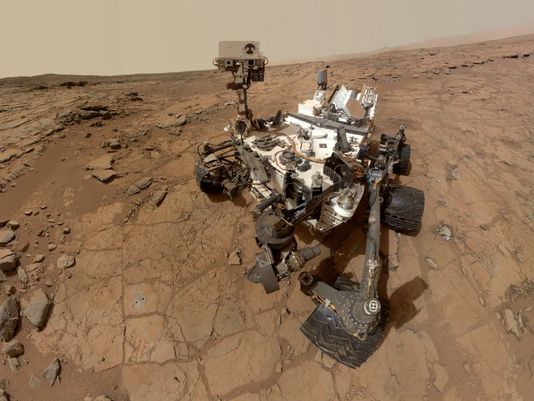 NASA's robotic rover on Mars has found signs that a vast and hospitable lake once spread over the now-desolate Martian surface, providing a potential home to past life for centuries or longer.

The shallow water body was roughly the size of one of New York's Finger Lakes, though not nearly so deep. Its waters boasted low salinity, just the right acidity and all the chemicals needed to support living organisms. Other than on Earth, the lake was the most life-friendly place in the solar system, according to a study published in the journal Science and announced Monday at American Geophysical Union conference in San Francisco.

"Is this the smoking gun that says there was life on Mars? No," says NASA soil mineralogist Douglas Ming, who took part in the new research. "Is this a smoking gun that this was a habitable environment? There's pretty good evidence for that. We have an environment that is very much … like on Earth."

Despite the difficulties of finding evidence of past life on Mars...


I'm not going to hold my breath on this one. Lately it seems that every other day a story comes out about this probability. Enough already. Find the bug, germ or what not and lets get the show on the road already. Billions spent and not even a microbe found yet. *At least not publicly *

For what it's worth.


Now, how did they take that picture of the rover from that angle? Maybe a martian took it.

SLAYER69
Billions spent and not even a microbe found yet. *At least not publicly *

Yeah, looks like Mars is and always has been dead as a doornail. Nice scenery, though, if you like lifeless rocky desert wastelands.


Oh, I've read the explanation someplace that it's actually a composite/collage of many images and the ones they used were from many angles chosen because they didn't show the arm of the rover that actually took the multitude images

Now, it's either that or Aliens...

The Japanese would love this tech, means they wouldn't need to ask local tourists to take photos of them.


Now, how did they take that picture of the rover from that angle? Maybe a martian took it.


The picture is a mosaic made up of many images taken by the camera at the end of the robotic arm, with the images overlapping. The pieces of the mosaic that included the camera arm are cropped away, and the overlapping of the images allow the whole rover to be seen, even with the arm cropped out.

here is the image and an explanation:

Explanation: This remarkable self-portrait of NASA's Mars Curiosity Rover includes a sweeping panoramic view of its current location in the Yellowknife Bay region of the Red Planet's Gale Crater. The rover's flat, rocky perch, known as "John Klein", served as the site for Curiosity's first rock drilling activity. At the foot of the proud looking rover, a shallow drill test hole and a sample collection hole are 1.6 centimeters in diameter. The impressive mosaic was constructed using frames from the rover's Mars Hand Lens Imager (MAHLI) and Mastcam. Used to take in the panoramic landscape frames, the Mastcam is standing high above the rover's deck. But MAHLI, intended for close-up work, is mounted at the end of the rover's robotic arm. The MAHLI frames used to create Curiosity's self-portrait exclude sections that show the arm itself and so MAHLI and the robotic arm are not seen. Check out this spectacular interactive version of Curiosity's self-portrait panorama.

Gonzo1971
I will assume that this is located at one of the poles.

No. It is in Gale Crater, which was the landing location of the "Curiosity" rover. Gale crater is very close to the Martian equator (about 4° south of the equator).

Gale Crater was chosen as the landing site for curiosity because it was though to have once been a wet place. Mission planners knew (from spectragraphic soil analysis done from orbiting probes) that Gale Crater contained clays -- and clays are know to only form in wet environments. The scientists who planned the mission felt that Gale Crater could have been filled by a lake or small sea sometime in Mars' past.

Therefore, the mission planners knew that Gale Crater was once wet. They also chose Gale Crater because of the mountain in that crater -- Mt. Sharp, which has been officially renamed Aeolis Mons. Scientists think that Mt. Sharp was created by layers of sediment, and some of that sediment may have been laid down by water (although some of the layers could have been deposited by the air). Erosion on Mars then wore away some of that sediment, re-exposing the crater, but leaving some layers of sediment behind, namely Mt. Sharp.

One of the science targets for Curiosity is the canyon walls of Mt. Sharp. Scientists intend to use Curiosity to study the exposed layers of strata along those canyon walls (some possibly laid down by water), and read them like rings of a tree to look to the geologic past of Mars.


Another words it is a Photoshopped image that is eliminating the snake slithering across the dried up seabed in Arizona.

Arken
Which kind of stuff we may found on the seabed of a so ancient lake?

That's also why MSL's mission scientists want to get to the exposed canyons on the side of Mt. Sharp. If they look at layers of sedimentary strata that were laid down by water, then there could possibly be clues to Mars' past potential for life in that strata that have been somewhat protected by the elements...

...and who knows? maybe even direct signs of past life (i.e., some sort of fossil). NASA geologist Matt Golombek was once asked (during a presentation he was giving on Gale Crater) "in his wildest dreams", what would he hope Curiosity would find, and he quipped "A fossil sticking out of the strata". Obviously that may be dreaming big (or maybe not), but he was asked "in his wildest dreams".