Over the past year, we’ve told the sad story of NASA’s Kepler space observatory, and how the failure of two vital components have resulted in the sad and premature retirement of humanity’s best tool for spotting Earth-like planets elsewhere in the universe. Just when all hope seemed lost, though, NASA has approved an ingenious plan to bring Kepler back online — a novel, never-before-seen technique that uses the Sun’s constant bombarding of photons upon Kepler’s solar panels to keep the telescope pointed in the right direction. 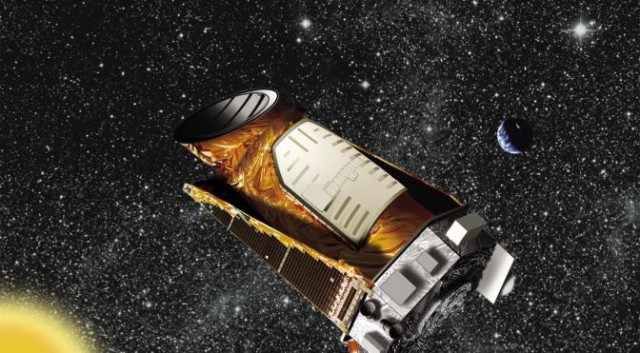 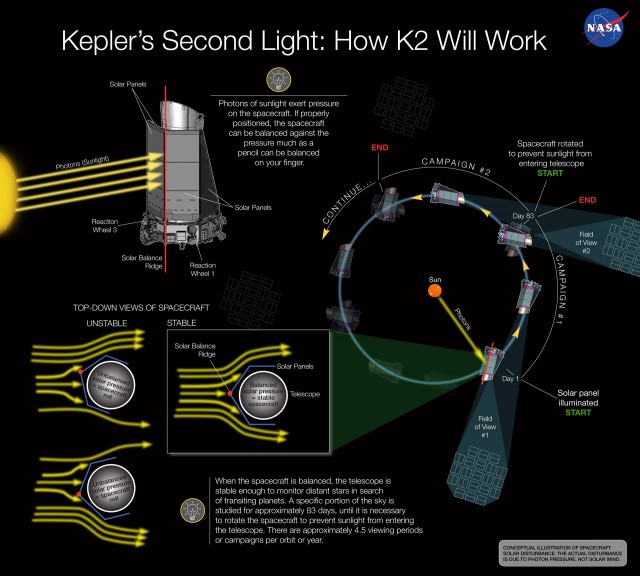 This is excellent news for Kepler, hopefully she will be able to continue her mission for a few more months, maybe longer. I also find the method employed to correct the problem fascinating!
edit on 28-11-2013 by andy06shake because: (no reason given)


From the Source, which tells us how they will jerryrig the vessel to sail different seas:


This method isn’t without it flaws, though. As Kepler orbits around the Sun, the angle of the sunlight changes, until eventually it hits the side of the spacecraft that isn’t covered in solar panels. To compensate, Bell Aerospace proposes that Kepler’s orbit around the Sun be broken into individual “campaigns,” where it focuses on a single patch of sky for 83 days — and then, after it travels far enough around the Sun, it turns around and looks at another patch of sky. One orbit would be broken into four campaigns of 83 days, with each campaign analyzing a different patch of sky. After a few orbits of the Sun, the Kepler K2 plan would produce enough scientific data to locate some more exoplanets.


Excellent news!
I hoped they would be able to salvage the telescope somehow.
I really hope this works and Kepler continues to find exoplanets for a long time to come.


Kepler relies on precision hardware called reaction wheels to keep itself pointed in a single direction. It launched with four and it needs three to aim properly. One of the reaction wheels failed in 2012, and a second showed signs of failure that led it being put it into a fuel-saving mode. So let's hope this new idea/fix at least returns some functionality even if it is limited.

posted on Nov, 28 2013 @ 11:49 AM
link
That's the one thing about space exploration that's so interesting to me: the need for precision computation and principles to produce the desired result. This is the kind of thing which demonstrates precision can do a lot of work, if used in the proper circumstances. There're a variety of cases in technology where if something is off by just a fractional margin, the whole thing explodes in your face. Attaining this margin of error is difficult because so many things can go wrong at different stages.

It's like writing a piece of code for a nuclear reactor control panel. It's like being expected to create a fail-safe system or to install multiple redundancies.

I wonder if they had this has a backup plan or if it just was an "ah ha!" moment? I personally think this idea has probably been on a couple minds over the years. To go from an idea to an application is a big leap, though, since bugs so easily crop up.
edit on 28-11-2013 by jonnywhite because: (no reason given)