page: 1
27
<<   2 >>
log in
join
share:
Corruption Exposed
+3 more
posted on Oct, 16 2013 @ 06:06 PM
link
Last August, an advocacy group posted advertisements at Vancouver TransLink stations. The ads depicted Palestinian land loss from 1946-2012. There was some controversy over these maps and what they portray. Here is the advertisement accompanied with some of the public support and outcry.

Jewish groups in Vancouver say they are considering suing TransLink for accepting controversial political advertisements showing the “disappearance of Palestine due to Israeli occupation over the past 66 years.”

On Tuesday, a group called the Palestine Awareness Coalition announced the launch of 15 bus posters and a large mural in a central Vancouver SkyTrain station, that depict the territory of Palestine steadily shrinking into the state of Israel in a succession of dated maps.

Marty Roth — a 79-year-old member of the coalition group behind the ad campaign — said they have already won a victory over groups that tried to “suppress” the ads.

“This will be controversial with a number of traditional Jewish organizations that have tried to suppress the ads,” Roth claimed. “But TransLink has refused to agree with them, because these are educational ads that are well within national advertising guidelines and the Canadian Charter.”

Roth said as a Canadian Jewish man he believes that the state of Israel is unjustly oppressing the people of Palestine and that his group wants to educate the Canadian public about the conflict.

But Jewish leaders including Mitchell Gropper, chair of the Jewish Federation of Greater Vancouver, called the ads a provocative attack on Jewish people that will incite hatred.

“This is of grave concern to our community at large, because the ads make the use of the buses unwelcome and unsafe,” Gropper said, noting that terrorist attacks in Israel often target buses. 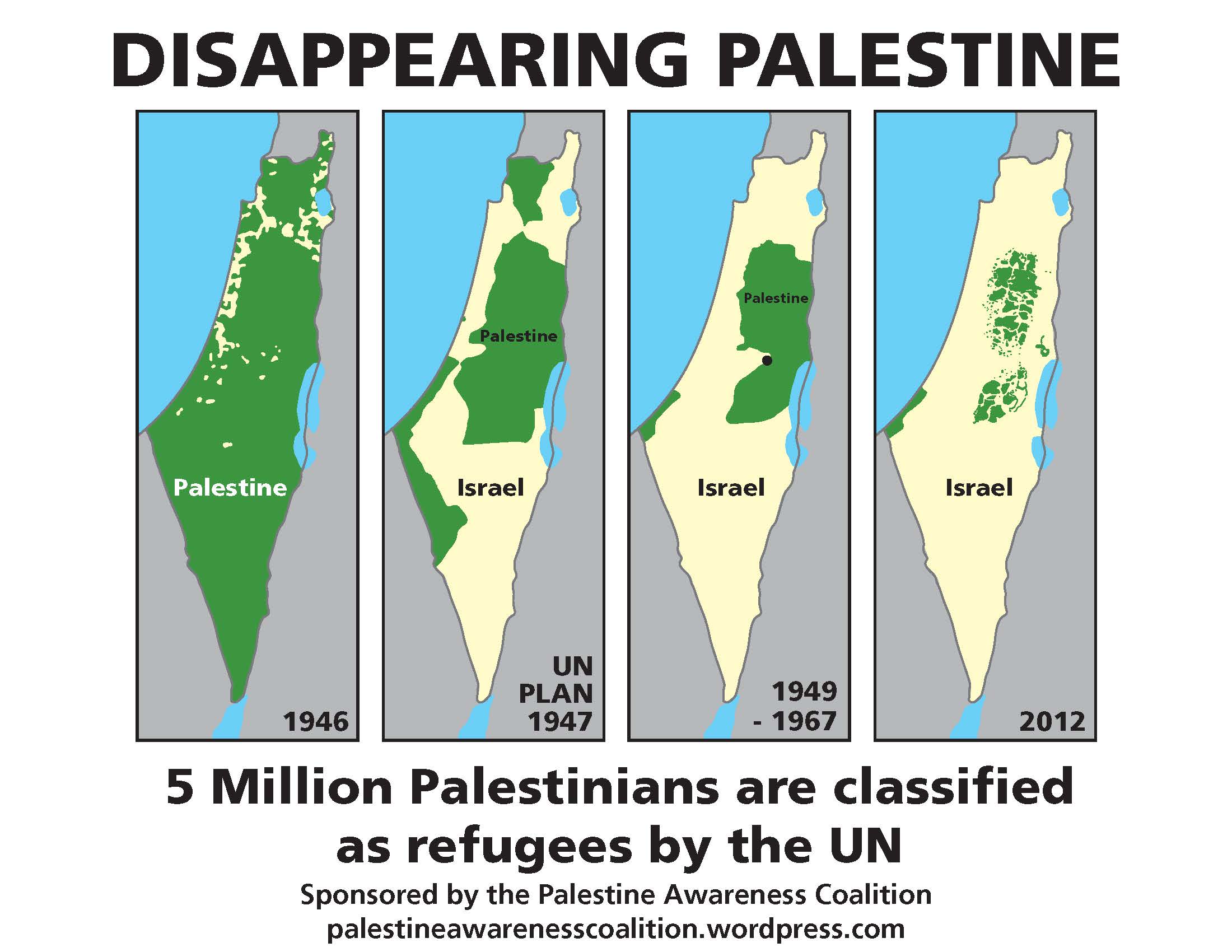 So as expected there were differing opinions about this map, even among Jews as the above text demonstrates. I am curious how Mitchell Gropper came to the conclusion that the ads were a provacative attack on Jewish people and that they will incite hatred...even many Jews agree with the ads.

As expected, there was a response to the original pro Palestine ads...

A pro-Israel group is fighting back against a controversial map sponsored by a pro-Palestinian organization advertised on Vancouver TransLink stations and buses.

StandWithUs, an international pro-Israel advocacy organization, is launching its own ad campaign Tuesday to counter what it calls “distorted” posters of a “Disappearing Palestine,” which depicts four maps showing a shrinking Palestine replaced by the state of Israel over six decades.

“We were at the point where we realized they were lies that were being seen by thousands of riders in Vancouver,” said Meryle Kates, executive director of StandWithUs’ Toronto chapter.

Kates said the pro-Palestinian posters — which first appeared in wall murals at two Canada Line stations and on buses this August — “delegitimizes” Israel and the Jewish people “and we felt we had to correct it.” 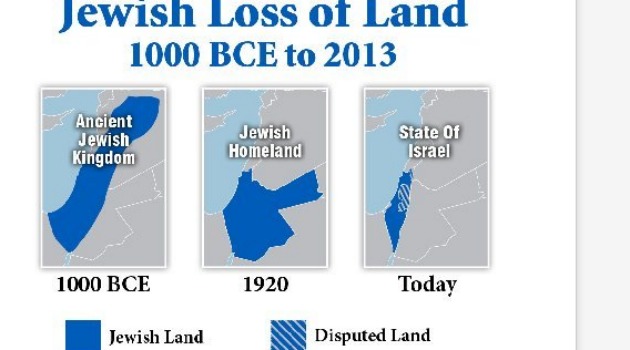 As you can see, many people were offended and felt threatened by the original ad, so they had to "correct it". In my opinion the original map which we can see earlier in the OP is accurate and has no need for correction.

I am not one to argue about biblical boundaries, but if that's your thing...power to ya...but I for one am not going to worry about 3,000 year old fairy tales.

The other two "more recent maps" are not very accurate in my opinion either.

First of all I was never aware that whole whole section was "Jewish Land" in 1920 as the second map shows. I was under the impression that there were Jews, Muslims, and Christians who all lived in harmony and that it was not officially "Jewish land". Correct me if I am wrong, but it was not officially "Jewish Land" until 1948 after the Nakba that displaced 750,000 Palestinians during the formation of the current state of Israel.

Now, the third map...this one bothers me too.

I applaud that they had the logic to at least list Gaza as its own state since they withdrew from there years ago, but if you look at the Occupied West Bank they claim it as "disputed land". The West Bank is illegally occupied under national law yet Israel claims it to be their own. They have systematically taken land from the Palestinians in the West Bank by building walls and settlements. Palestinian land in this region is constantly shrinking regardless of international condemnation.

I appreciate StandWithUs' attempt at "evening the score" but in my opinion they lost all their credibility with all three maps, especially if they were expecting people to take them seriously. All they have done is shown their fear of the world waking up to the facts behind the Israel/Palestine issue.
edit on 10/16/2013 by Corruption Exposed because: Forgot to add the second map...

Why do you find it odd?

If you actually read the article, it wasn't Palestinians putting the ads up in Vancouver, just concerned citizens supporting what they believe in.

What did you find to be inaccurate about the maps?

Wouldn't an anti-israel poster prompt a response? we're talking a heated confrontation longer than anyone alive..

This won't end until both sides, and the world for that matter, realize how stupid it is to be attacking each other .. this is why more exciting things like space travel will not happen.. if we're not able to live with each other then we can't possibly exist in a universe with others..

I'm always debunking UFO's but what if they are here and are just monitoring us.. would you want to engage with a species that is killing itself? .. after all.. they wouldn't see us as american vs middle east, or Israel vs Palestine.. they'd see us as two spiders fighting in a cage.. if I saw that, I wouldn't want to step in either..


I say f*ck the map.. why not just realize the human population and coincide? the REAL big issue is if we don't learn to do that NOW then we have a HUGE problem in our future as billions more are born all over the planet and need a place to live.. this is a larger problem than a little tiff of a land dispute in the Gaza strip.. this little example is an example of what's to become globally if people don't learn to get off their high horse and work together..

I asked if there was a country named Palestine, as the map seems to indicate. I was just wondering.


You are right, the "opposing side" should always have the right to respond when something controversial is discussed which they do not agree with. My only concern is that the response should be valid, unlike the one in this case.

As for the ongoing war, that is a whole other issue. But in my opinion, it doesn't have to be that way. People believe just because it's been a certain way for a long while that it will never change. This attitude is part of the problem.


I disagree with your opinion about the map. The map shows a very important issue that has been unfolding for many years now and should not be ignored in my opinion.

As for your views on all of us being one, together, I agree. The human populace needs to get past all this divide and conquer BS, but some of it still cannot be ignored even though addressing these issues will most likely cause conflict/turmoil.


I like how the first map in blue says, "Ancient Jewish Kingdom".

You know, my ancestors came from Germany, and there used to be an "Ancient German Kingdom" under Emperor Lothair I in 855. I guess that means all us people with Germanic decent can go back to Germany and decide to make it our new home, even if people already live there?


Great video, thanks for sharing!

I hope everyone watches it, but I am sure the video will have its skeptics due to the content.

People can pretend Palestine doesn't or never existed, but they are only fooling themselves.


I second that notion...France and Ireland here I come...

Make way for the chosen one!

posted on Oct, 17 2013 @ 10:59 AM
link
I absolutely fail to understand why the Israeli occupation and war against Palestinians is not considered an act of ethnic cleansing by the rest of humanity.......s


I agree, it is kind of mind boggling...but my best explanation for this ignorance shown by the world's leaders is nothing more than good old fashioned hypocrisy mixed with greed and political agendas.

stirling
I absolutely fail to understand why the Israeli occupation and war against Palestinians is not considered an act of ethnic cleansing by the rest of humanity.......s

That's just it the UN has passed numerous resolutions against Israel for war crimes and crimes against humanity. But America keeps voting against them so nothing gets done about it. You can thank the bought and paid for traitors in our government for that.

You forgot to mention the reason WHY the romans Called it Palestinia. It was originally known as JUDEA but the romans punished the inhabitants for all of their attempts at revolt. So please do not forget that fact.


Because if they truly wanted to wipe the Palestinians off the map, they would have done so by now! The people of the West Bank live in peace and prosperity, they are not at war!

Gaza can have the same thing, but they continue to antagonise their neighbour, it's their choice and it's not like they do not know what the response will be?

All the land that's disputed was won in war that the Arab nations lost. Israel gave back the Sinai, Gaza and the West Bank, in exchange for peace, which is not the actions depicted by many here pro Palestinian sympathiser's who claim Israel is always stealing land to create a 'Greater Israel'!

If 'ethnic cleansing' was going on, please explain how the Palestinian population is growing year on year?

The facts don't always support your claims do they?