posted on Oct, 15 2013 @ 05:56 PM
link
No I don't believe in Reptilians and I'm sure there's a natural cause for this. I was watching CBS Evening News today and this stood out to me and so I took two photos. Thought people here might like to see.


He has an abnormality in his pupil is all. It happens in some people.


Did you get his name? Interesting.

They are able to walk around during the day, but still have great
night vision.

Get yourself a mongoose, and keep him away from your cat...

posted on Oct, 15 2013 @ 06:12 PM
link
He isn't part reptile, he is just part cat. Sometimes it is called "cat-eye" or "Coloboma" as someone said above. It is odd looking and I had a friend that had one eye like that so I know it happens (pretty sure she wasn't reptilian either).


I believe in Reptilians, because I have been told by a good friend with CIA contacts that they do indeed exist.

Physically, he was shorter than I am, but thick, strong, muscular and very powerfully built.

When I looked into his eyes, and saw those deep reptilian slits for myself, up close and personal, I nearly fainted. They were a slight golden-brownish-greenish color, those slits that seemed to glow just a little bit. I was very taken aback. I was deeply horrified at those eyes of his. Yet, I could not move or look away, but felt drawn to him, even more. Then I was deeply frightened and wanted to run away.

My chance encounter, was at an open air concert, and he was one of the "security" personnel working it.

I didn't run, but told him I had to go , and it was almost hard for me to leave his side. He was still working that psychic angle on me, and I finally had to say a prayer, and FORCE myself to leave.

I was shaken up just a bit, but alive and well...


edit on 15-10-2013 by maceov because: Accidentally left out a few things I felt were pertinent.


My sisters kid has that abnormality. Apparently it doesn't affect his vision.

I don't think he's a reptile..

posted on Oct, 15 2013 @ 07:03 PM
link
David Bowie has the same condition.
People think his eyes are two different colors. Theyre not. He's had a triangle shaped pupil his whole life.
There was no such things as reptilians when he was ziggy stardust, but then again, he's done a ton of stuff about aliens.
Major Tom, The man who fell to earth.
Maybe ask Iman or mick jagger if he has a weird... tongue.

He has a condition called anisocoria, which is the medical term for unequal pupils. In 1962, aged 14, he got punched in the eye by his schoolfriend George Underwood, during an argument over a girl named Carol Goldsmith. George's knuckle caught David's eye and dislodged something. David was admitted to Farnborough Hospital, where it was found that the sphincter muscles in his left eye were damaged and he underwent two eye operations. He has an enlarged pupil that remains permanently open, giving them an unusual appearance.
edit on 10/15/13 by PtolemyII because: (no reason given)


that missing girl, madeline mcainn also has that as well.

posted on Oct, 15 2013 @ 07:37 PM
link
I don't know dude, that looks pretty problematic to the guys eye sight. I would think he would want some type of contact to help with the cosmetic look of the eye.

Still it kinda freaked me out.


Below is an account of a group of Chinese scientists led by Professor Chi Putei who surveyed the caves of Mount Bayan-Kara-Ula, in which they found some very unusual remains:-

Experts in deciphering ancient written characters have been puzzled over the disclosure of the secret spirals from the cave Bayan-Kara-Ula for two decades. Finally, the professor of Beijing University Zum Umniu deciphered several inscriptions
The grooved letters narrated that approximately 12 thousand years ago some flying objects crashed in these mountains. Chinese archaeologists found a mention of the peoples who lived in the mountainous caves of Bayan-Kara-Ula.

A corpse of another "alien" was found by Turkish cavers. A mummy of the ice age was resting in a sarcophagus made of crystalline material. The height of the humanoid male creature did not exceed 1 meter 20 centimeters, his skin was light green, and he had large transparent wings on his sides.

According to the researchers, in spite of the unusual appearance the creature looked more like a person rather than an animal. His nose, lips, ears, hands, feet, nails, were very similar to human. Only his eyes were very different, three times bigger than those of a human, and colorless, like reptile's eyes. 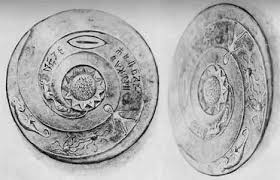 The spiral grooves actually turned out to be composed of tiny hieroglyphics that tell the incredible story of spaceships from some distant planet that crash-landed in the mountains. The ships were piloted by people who called themselves the Dropa, and the remains of whose descendants, possibly, were found in the cave. According to one account, the caves may have been artificially carved, and were more like a complex system of tunnels and underground storerooms. The walls were squared and glazed, as if cut into the mountain with a source of extreme heat! 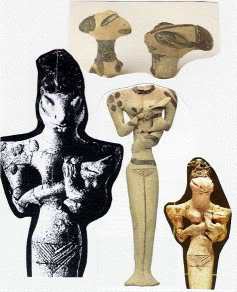 The above photo represents a number of reptilian entities found in Iraq. They are dated at 5000-4500 BC

posted on Oct, 15 2013 @ 08:00 PM
link
Two other posters above are correct. It is called Coloboma. Madeline McCann has it. I remember that was one of the things that stood out in her description when she was first missing. I don't think she's a reptile either.

I think your "reptilian" missed his steak tartare for the evening meal.

Honestly, I don't believe in reptilians but I do know we have a very large number of certifiable psychopaths running our government(s) and media. It would not surprise me in the least to find out they had a taste for raw meat.


Reptilians are real and they have kids, so all you people with your "Innocent children" couldn't possibly be "reptilian" mantra are completely wrong. And whose to say the government and media didn't invent the "colobama" condition to cover for those that couldn't hide their reptilian nature (most reptilians can mask the eyes to look like ours). All government officials are Reptilian and all can trace their lineage to the Royal Crown of England but it goes even deeper than that.

soaringhawk
No I don't believe in Reptilians and I'm sure there's a natural cause for this. I was watching CBS Evening News today and this stood out to me and so I took two photos. Thought people here might like to see.

any link to the video?


It is in fact a genetic condition called coloboma.

A coloboma (from the Greek koloboma, meaning defect,[1]) is a hole in one of the structures of the eye, such as the iris, retina, choroid or optic disc. The hole is present from birth and can be caused when a gap called the choroid fissure, which is present during early stages of prenatal development, fails to close up completely before a child is born. The classical description in medical literature is of a key-hole shaped defect. A coloboma can occur in one eye (unilateral) or both eyes (bilateral). Most cases of coloboma affect only the iris. People with coloboma may have no vision problems or may be blind, depending on severity. It affects about 1 in every 10,000 birth

All it takes is a 10 second search on google images and you will find hundreds of examples.

Do extra terrestrial beings exist with scales and the more well known "reptile" features? Well the Universe is a pretty vast place so I guess anything is possible. However this is just a regular guy.