The side of the 114,500-ton (103,872-tonnes) that had been underwater was rusty and brownish, contrasting with the white of the exposed side, although officials said the shift in the angle was only one or two degrees.

The biggest salvage of a passenger ship ever attempted was initially delayed by several hours because of storms.


History in the making - now.

Not much headway's been made yet - but it's well worth the watch.

Salvage coordinators say the lifting could last up to 12 hours and warn there will be some spillage of the ship's waste into the pristine Mediterranean waters.

But they have played down environmentalist fears of thousands of tons of toxic waste pouring into the sea, saying they are ready to clean up any spill.

''The concentrations will be limited. There is no contamination problem,'' said Giandomenico Ardizzone, a marine biology professor working on the project.


I read earlier they're using 'almost' 100% biodegradable supplies, etc. It will be incredible interesting to see how it goes from here.

They have however ruled out the possibility of a split.

The man giving the orders from a control room on a barge next to the Costa Concordia is Nick Sloane, a South African salvage master with years of experience on spectacular shipwrecks around the world.

"We are ready. All the risks have been identified,'' Sloane told reporters on the island ahead of the start.

Islanders whose lives have been turned upside-down by the wreck said they were relieved that the time when the ship will finally be removed was drawing closer.

Even if the ship is lifted upright, they will have months more to wait, as the towing away is not planned until spring of next year after winter storms.

The ship will then be cut up for scrap.


There ya have it. 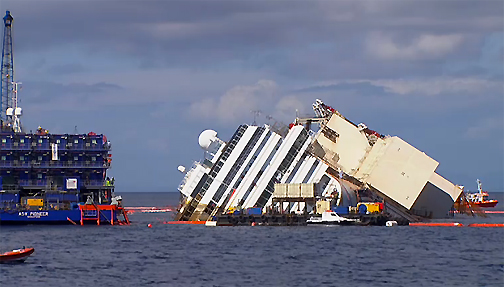 Thanks for the heads up - silly search engine!

you're thread is far better then mine... I just wanted to give ppl the heads up...

you got all elaborate and stuff...