typhoon about to pass over japan.... 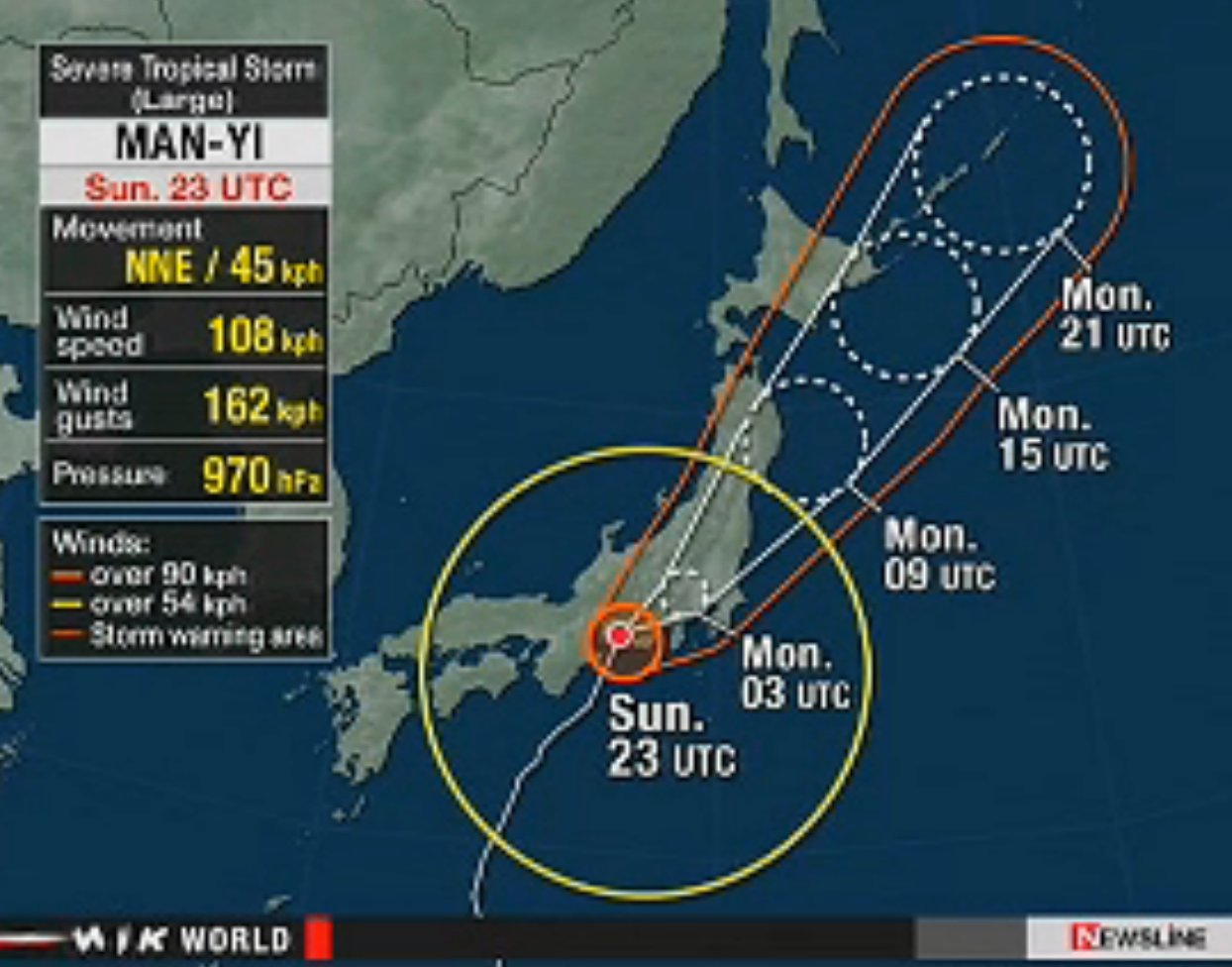 NHK live just said workers at the Fukushima plant had to release water into the ocean, but the amount of radiation in the released water was "within government standards". Why doesn't that make me feel better? Most of the other news is business as usual and fluff.


ETA: this article has a video of the flooding that has occurred. it looks pretty bad!!

Our planet is dying, there must be an escape hatch for those who enjoyed the golden parachutes. Like in the movie 2012, if we were not in danger of a global catastrophe, then those with the power and control would not tolerate this level of planetary wide inhalation.

So I work on myself, I work on what the Universe has given me to work with, and I live through intuition and the energy of something far greater and connected than any of this.


Our Planet is not dying,
he still have a minimum of 2,5- 3 Mrd Years before the Sun get to big
with a massive Bang of Gamma-Radiation!

Typhoons are very common here in East-Asia and even this one was nothing special,
every Year we have 1, 2 or even 3 of this heavy loaded (with Rain) ones.

pasiphae
wow. this typhoon is a lot worse than i thought. this can't be good for the plant!! LOTS of flooding and high waves. entire towns evacuated.....


i've been through storms like that and the eye doesn't have to pass over for it to still do a lot of damage. the plant is unstable and it is flooded..... according to reports. i realize typhoons happen all the time but that doesn't negate the fact that it affected a lot of people and has done some decent damage.


the storm did pass over fukushima even though the eye didn't move directly over it. the issue is that even a small storm is bad for the unstable plant. they are currently pumping floodwater out of the plant and into the ocean while claiming it isn't very contaminated water. we won't really know what sort of damage, if any, has happened for several days at least and then we can't fully trust TEPCO to give the straight scoop. the storm had higher winds than was predicted and the rainfall was also more than they expected.


What else they should do?
Collecting even this Rain-Water?

C'mon, be a bit Realistic!

F'Shima is really, really bad and all this Water Problem is only a small Fish
compared to what happened already (in the first Month after 3/11)
and what could happen in the Future!

Always we get scared when something happened in Japan
but we do nothing when we watch our local Plant
in front of our Window, this is a bit strange, in my opinion!


What I find a bit strange is the fact that you're attempting to downplay the gravity of the situation over there.

They are not pumping rainwater out into the ocean, which was pooling around hundreds of tanks that contain radioactive water, for nothing. We know at least one of those tanks are leaking. ~$heopleNation

posted on Sep, 16 2013 @ 05:52 PM
link
apparently they've used the excessive rain as an excuse to dump a lot more into the ocean. TEPCO is now under investigation for dumping contaminated water with out really testing it.


as far as i know none of the plants in my country have gone into meltdown. do i think nuclear plants are under reported/watched here in my country? yes, i absolutely do. however, this is a forum on japan exclusively. if i post about plants in the US my post will be removed because it's not relevant.

the forum here is SPECIFICALLY to post concerns and news regarding fukushima and japan. the current typhoon is relevant regardless of how many other typhoons have hit since the original disaster.


Our Planet is not dying,
he still have a minimum of 2,5- 3 Mrd Years before the Sun get to big
with a massive Bang of Gamma-Radiation!

Typhoons are very common here in East-Asia and even this one was nothing special,
every Year we have 1, 2 or even 3 of this heavy loaded (with Rain) ones.

pasiphae
wow. this typhoon is a lot worse than i thought. this can't be good for the plant!! LOTS of flooding and high waves. entire towns evacuated.....


Of course "our" planet is not Dying. Wounded sure, but it will keep spinning long after you and I have died from what unknown ailments afflict us. Now what caused those unknown ailments and what Fukushima brings to the table are still unclear. There have been many life forms on this planet that have come and gone extinct. Some thru a cataclysmic event, some man made, and some because the weather changed. In a thousand years there might be humans still on this planet. We probably would not recognize them today, just as if you walked into a room of white Europeans in the year 1013 dressed as you are today as a man of Japanese ancestry. They would say "WTF are you". Genetic mutations aside you and I probably will never know.

Is Fukushima a "Planet" killer absolutely not, Earth has 4-5 billion years left maybe more. I sure the heck don't though, and cesium, tritium, PLUTONIUM etc. is a silent killer. They "your Government\TPTB/My Government" will never fess up to it period. Except to say "I am so sorry... But ... " Cancer is BIG Business and Business is good. I personally know 9 people presently diagnosed with diseases that could be fallout related and a co-worker who just suddenly passed away with brain cancer. We will never know because they will never trace/blame of any of it to the Fukushima problem.

Your Breeder reactor is kind of FUBAR right now, so as of right now 9/16/2013 Japan is Nuclear free. Do your country a favor and keep it that way. No Make it that way.

Somebody has to step up and prove a point and stop this Nuclear madness.

posted on Sep, 16 2013 @ 11:23 PM
link
fukushima has already seen bigger taifuns than this one... this one was not that strong.
Just checked it, seems it was pretty strong even though all my friends and my girlfriend told me it was weak.... I have no idea what to believe now.
Maybe it was regional, but in Tokyo it seemed not too strong.
edit on 16-9-2013 by aLLeKs because: (no reason given)


i don't think it was predicted to be that bad but it wound up being stronger than they thought with higher winds and more rain. while this was the 18th typhoon this year they aren't usually that bad. this one packed a bigger punch than the rest. well over 200,000 had to be evacuated to shelters. typhoons aren't usually a big deal but this one was.

they said at one site where water was found contaminated beyond the safety limit workers couldn't start the water pump quick enough in the rain, and toxic water had leaked from the enclosure for several minutes.

i aslo find it a little inadequate that they used SANDBAGS around the leaking tanks..... the sandbags washed away. they have replaced them but..... sandbags??


Just spent a load of cash getting 'goal line' technology put into all football grounds!!

posted on Sep, 17 2013 @ 10:55 AM
link
Its a good time for tepco to dump a lot of water. The hurricane will give them cover. Expect good news in a week or two about some magical lower of water levels.

I sat outside a bar having a beer on the veranda while it did so. People seem to escalate problems in Japan to ridiculous levels on here. No one I spoke to that day seemed even mildly concerned.

this could be really really bad for those cooling pools (one in particular that has no roof) and the ground is going to get softer with all the rain. not to mention the high winds..... what effect might they have?


Not much. As expected.

i posted because it was worthy to me. the typhoon was NOT a small one and TEPCO did experience problems because of it.