page: 1
26
<<   2  3 >>
log in
join
share:
ChaoticOrder
+6 more
posted on Sep, 10 2013 @ 01:00 PM
link
I just spent a few hours developing a script for greasemonkey and thought it was worth sharing. If you're unaware, greasemonkey is a really cool add-on for Firefox which allows one to apply enhancements or fixes to your favourite website. You can find all sorts of awesome scripts on userscripts for just about any website out there. I'm using greasemonkey with Firefox but I believe some other browsers do support it, but I can't guarantee my script will work on anything else other than Firefox.

You can view the source of the script if you don't trust me, it's just over 100 lines of code, which isn't very much. It does some simple things like replace the new smilies with the old classic smilies, fill in the space between posts, adds a toggable compact live feed box, and other miscellaneous template tweaks. It does not remove, replace, or interfere with the adverts in any way. Keep in mind that using ad-blockers on ATS is against the terms and conditions. And if you have any suggestions for more features let me know.

Here are some screenshots to show you what it does: 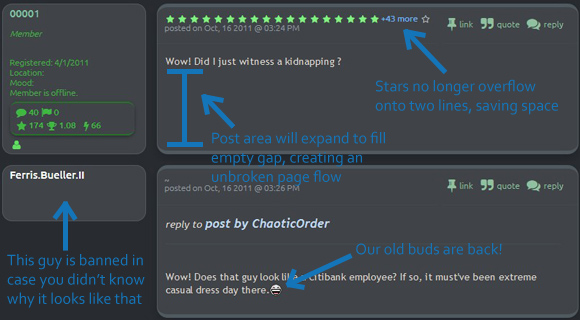 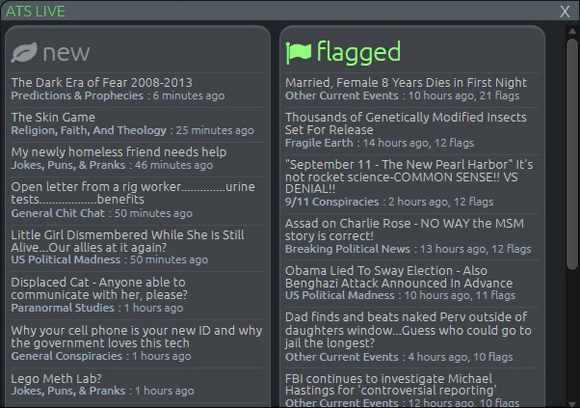 The toggable live feed box will appear in the bottom right hand corner like the one in the old ribbon so that you can quickly check out the latest threads without having to open a new window. It should also be noted that not all the old smilies are restored, but most of them are. Since there wasn't a gray-scale crying smiley I used the flaming smiley instead because I can't live without it. Oh and one other thing it does is give the footer a background in the dark theme so it doesn't look weird.
edit on 10/9/2013 by ChaoticOrder because: (no reason given)


I know they don't like saying why a member is banned, but maybe it was because he was circumventing the new icons?

I too can put our old buddies up and I asked Skeptic if that was against T&C as I didn't see it, but he has yet to reply.

I'm good with the new look, but will be boycotting the emoticons until the crew come up with some better ones.


I too can put our old buddies up and I asked Skeptic if that was against T&C as I didn't see it, but he has yet to reply.


I think you're confused about what my script does. The screenshots I posted above are the result of my script, all of the new smilies are replaced with the old ones. Of course you could just use the image tag to insert the old smilies but that wouldn't change all the smilies to look like the old ones and it certainly wouldn't be against the T&C.


I always get confused when people talk about computer script/programming/code. I guess I just lump them all together in the area that reads. "Here thar be Dragons!" LOL

I really ought to do something about that.

But it does look pretty good. I take it that this script only affects your confuser and nothing else? Such as would it affect other websites that you view? Or can you tweek each website view to your liking?

Also when you dump your cache and delete your cookies (again, one and the same to me) do you have to start all over?


Such as would it affect other websites that you view? Or can you tweek each website view to your liking?


It will only affect a page with "abovetopsecret.com/forum/thread" in the URL, so it wont even affect all pages on ATS, only the thread pages. I should have mentioned that earlier. The userscripts.org website has a whole range of different scripts. There are some really good ones for YouTube and eBay and other popular sites. You'd be surprised how much better some of them can make a website. But in order to run any of the scripts you will need to have the greasemonkey add-on installed in your Firefox browser.

Also when you dump your cache and delete your cookies (again, one and the same to me) do you have to start all over?


The only time the script will stop working is if you disable the script or disable greasemonkey.
edit on 10/9/2013 by ChaoticOrder because: (no reason given)


I'm sure you can see that I am on the Neanderthal level of geek. How would you rate user friendliness for GreaseMonkey?

I would like to try it, but I just picture having a canoe anchor after messing with it. I've done stuff like that before. Had to reboot everything.


How would you rate user friendliness for GreaseMonkey?


Well if you're familiar with how add-ons are installed into Firefox, it's basically the same process as that. On the userscript page for my script or any other script, you will see a little install button near the top right, if you click that greasemonkey will detect that you are trying to install a script made for it, and it will confirm that you really want to install it.


I don't have FireFox on my Desktop but I do on my Laptop. It'll give me something to do this weekend while farm sitting.

Wish me luck, and thanks.


were cooking on gas now thanks
edit on 10/9/13 by geobro because: (no reason given)

I take it, if someone is using greasemonkey and different smileys in their posts. Others will still see the 'normal' ATS smileys?

posted on Sep, 10 2013 @ 06:48 PM
link
I love it! Not quite as nice as going back to the old, proper layout would be, but at least I can stand this and don't have to look at those godawful smilies (that I keep saying should be completely removed).

posted on Sep, 10 2013 @ 07:03 PM
link
Interesting... I installed Tampermonkey Extension for chrome and clicked your link to your script and it installed it and seems to be working. Nicely done!

dreamfox1
Ok now its bad again ... what happened to the format it had 3 minutes ago?


There seems to be a rare occasion where the script will stop working. If you will refresh the page it should come good again. If it doesn't then it means you disabled the script or disabled greasemonkey. Also keep in mind that it only works on forum thread pages.
edit on 11/9/2013 by ChaoticOrder because: (no reason given)

madmangunradio
Interesting... I installed Tampermonkey Extension for chrome and clicked your link to your script and it installed it and seems to be working. Nicely done!


Good to know. You can thank the magic of jquery for that.

That was incredibly simple. It took me about 40 seconds.