Absurd Creature of the Week: 10-Foot Bobbit Worm Is the Ocean’s Most Disturbing Predator


This is Eunice aphroditois, also known as the bobbit worm, a mix between the Mongolian death worm, the Graboids from Tremors, the Bugs from Starship Troopers, and a rainbow — but it’s a really dangerous rainbow, like in Mario Kart. And it hunts in pretty much the most nightmarish way imaginable, digging itself into the sea floor, exposing a few inches of its body — which can grow to 10 feet long — and waiting.

This is a amazing yet frightening creature. To be truthful, I don't want to have a run in with it. A ten foot long bug!

That is one ugly critter... 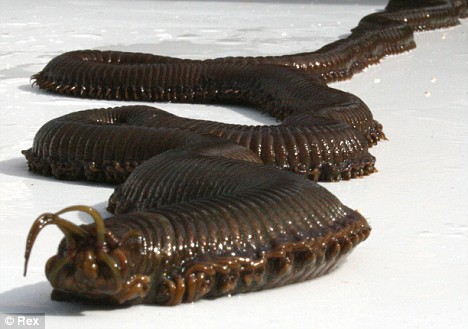 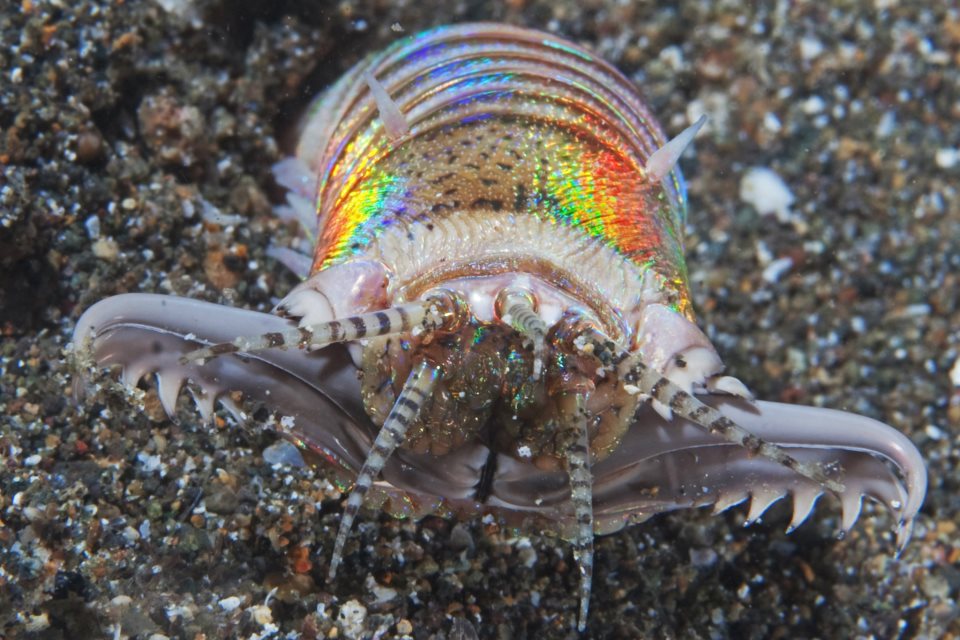 never heard of it before....


It is amazing to see another creature take down the very poisonous Lionfish. I never knew this creature existed. Who knows what other unknown scary creatures lurk in the seas.

According to Wikipedia: "Armed with sharp teeth, it is known to attack with such speeds that its prey is sometimes sliced in half."

What kind of a gentle and loving Mother Nature could fashion such an evil piece of work? Given only the critters I've seen on ATS the past few months, I hereby take a solemn oath that I am NEVER swimming in the ocean again as long as I live....


Read the article and you'll see how the author supposes the worm got it's name.


Read the article and you'll see how the author supposes the worm got it's name.


Well, exactly. I put my hand protectively over my manhood just watching the video....

posted on Sep, 8 2013 @ 11:51 PM
link
Lol, I remember seeing these little buggers on Youtube a month er two back. Incredible at what is still waiting to be discovered, eh?


Yep, I had a feeling... When they die, they lose their rainbow powers. I'm assuming that one is a dead specimen.

Oh yeah, you just know it has a special part of its brain that programs it to instinctively goes right for the junk. Like those teeny tiny fish in the Amazon with those spiny barbs on them that are attracted to the traces of urine in your urethra...

Heck freshwater AND saltwater are ruined for me now. I'm not afraid of sharks as much as I am of something that's smaller and faster and I won't see it or be able to maneuver around it. If you hold your arms out it can just go in between them. At least a shark you can fight...lots of big surface areas to stab or punch or smack with an oar. This thing will lurch out of the water and be burrowing itself into your eyeball before you even know what hit you...

Well at least I'm pretty sure my good ole Pac NW lakes and rivers are safe At least we know which spots are safe. But if I ever venture out of my familiar surroundings, I'll be sure to be extra cautious. Like don't go swimming in the ocean without an Iron Man:War Machine Suit with 50 guns pointed in every direction with a nuclear self destruct option in case I get startled and decide to end it all. At least I'll take the sob out with me who scared me, along with every other lifeform in a 10 mile radius, so hopefully it was something dangerous and not just some minnow or a peice of seaweed floating by... It'd also be usefull if I emptied all my ammo into its lifeless, BBQd corpse, and just want to make absolute 100% sure it is dead... Sure, I'll be dead too... But eff THAT...that thing is Not gettin me! I hate it! Why give such a terrible thing rainbow powers??? Why not cats? Or birds?

You know,.I've heard a theory that says that we don't know what dinosaurs' hides looked like, so some of them couldve been rainbowed up like that too. Or some parts couldve maybe had fur, I dunno...maybe they weren't all scaly. Maybe not all of them. We know some had feathers, so, whatever. The feathers had to be some color. Could've.been some flamboyantly colored dinos out there... Just like some birds have bright colors to attract mates, so to could some of the dinos. Or there could've been some interesting camouflage patterns. Ah, thank god for auto correct...I have no idea how to spell camouflage. And yet there it is.


Top one's not a bobbit worm, it's a close relative polychaete worm that turned up in a British aquarium. Smaller specimens of similar species are a common pest of tropical marine aquarium owners, they stow away in live rock (coral) and cause assorted trouble, eating corals among other things. The bobbit worm is more actively predatory (as you can tell by those wicked jaws) and can rarely grow up to nine feet long. I've even seen a dried, somewhat mummified-looking specimen passed off as a Mongolian Death Worm.


Heh I took that oath 20+ years ago and ive kept it till this day, heck i dont even go into lakes or ponds... for all the bears, lions, wolves, crocs, snakes, spiders, apes, flesh eating bacteria and all the other dangers of dry land... nothing can compare to the cold and alien things that live in the deep dark murky depths of the oceans and rivers.

In my opinion there are some places man was not mean to go... the oceans are one of them, or are at least to me, if we where we' have gills...


......and people wonder why I don't like wading in the ocean! Nasty thing! It banged the poor fish to death!

What kind of a gentle and loving Mother Nature could fashion such an evil piece of work? Given only the critters I've seen on ATS the past few months, I hereby take a solemn oath that I am NEVER swimming in the ocean again as long as I live....

I'm sure he meant well when he created it...