I agree its a probable image artifact. But it could also be a flying black square close to the lense?
The artifact seems to have detail i.e lighter lines down the edge.

Those light edges are part of the image artifact. For some reason that I admit I don't understand, the edges of those areas of lost/missing data have that "halo" effect.

Here is another image -- this is from one of the "OLD" rovers (this is from Opportunity). As you can see, that "halo" at the perimeter is part of the data loss artifact: 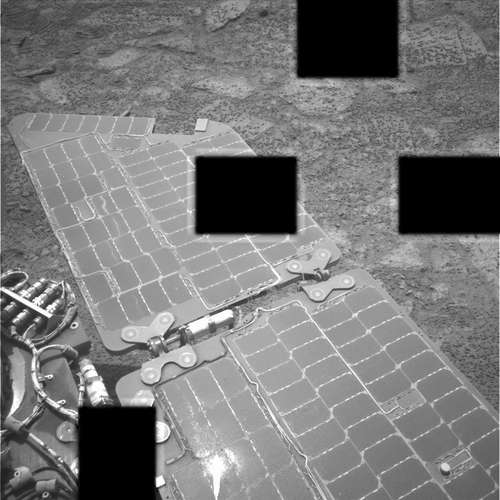 Like I said, I don't know exactly why those pixels are brighter around the perimeter of the black data loss areas, but it MAY have something to do with pixel interpolation. In a JPG file (especially with some JPG compression), the value of any particular pixel is tied to the value of the surrounding pixels -- i.e., the pixel value is interpolated based on the pixels around it.

However, I didn't think there was any that much (if any) compression with these images, so I don't think there should be much (if any) interpolation. There may be some other explanation for the lighter perimeter, but it is clearly a data artifact, and not really there.

posted on Sep, 6 2013 @ 07:13 PM
link
Yes, in my opinion it is definitely a data loss area and the whiteness around the edge is probably because it is has been compressed as a JPG image (or whatever they do to them) after it was downloaded.

If anything is being covered up by it, then it would have to be on one image only, so it is probably unlikely that is happening. qmantoo
Yes, in my opinion it is definitely a data loss area and the whiteness around the edge is probably because it is has been compressed as a JPG image (or whatever they do to them) after it was downloaded.

That shows that the compression level they use is relatively high.

PS: the photo with the black square, apparently, was replaced with a newer version, without the square.