Victory or Set Up? Waiting for Congress 'Approval' on Syria.

posted on Aug, 31 2013 @ 08:19 PM
link
Just before typing this thread up, I was pretty much set on my opinion that the UK's vote to no intervention in Syria was a small victory for humanity, especially combined with the Egyptian's overthrow of the Muslim Brotherhood in Egypt. These two events seemingly represent huge stumbling blocks for TPTB, the hidden hand trying to direct this world. Yet, as something of a complete shock, it is now the case that Obama too, is going to put military intervention down to a vote. Suddenly, I'm incredibly suspicious.

- Western democracies are supporting the Muslim Brotherhood take over of the middle east and North Africa. This is a fact. It is happening both covertly and overtly. Covertly in the sense we allowed Mubarak's Egypt to fall into the hands of the brotherhood and overtly in the sense we are using our armed forces to take down regimes, as in the case of Libya and making that country a hub of Islamic extremism. That has been our foreign policy over the last decade.

- The UK parliament vote is the FIRST time in history that the UK has ever vetoed a military deployment. It is hugely significant. Whereas in 2003 the UK was fooled into the Iraq war, this time MP's are showing a reluctance to going to war again.

With those two points, have we seen politicians wake up or are we being set up with Obama saying the choice is down to Congress and democracy?

TPTB rarely put 'their own' into politics. Instead, they use lobby groups and think tanks such as the CFR, PNAC, Brookings etc- they effectively pay off the politicians to follow their policies, they host lectures and publish papers to convince those in 'power' to do their bidding. A lot goes on behind the scenes to convince our politicians on which paths they need to follow.

At the same time, we live in the Age of Information. Many politicians are corrupt yet many will still do the 'right thing' when something such as Syria intervention arises, the info is out there and they will be doing their research just like the rest of us. We have seen this with the recent UK vote- 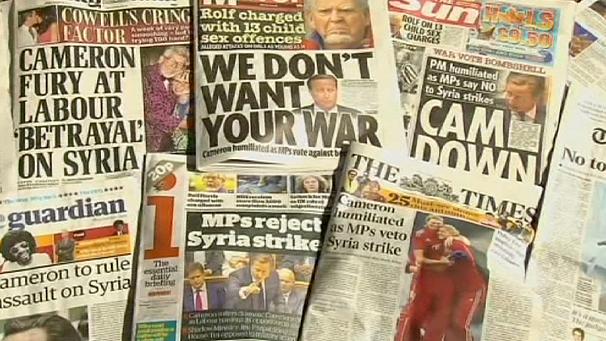 The coming Congress vote is so important in understanding coming events. If they go for intervention, then we will know American politics is utterly corrupt and the agenda marches on, yet I have a theory that Congress is going to go the same route as the UK's parliament.

Think about what this represents according to the OFFICIAL NARRATIVE-

- Assad regime uses chemical weapons against their own citizens.

- West sticks to their 'democratic' values and puts military intervention down to a vote. Both the UK and US vote no.

- Further down the timeline, the west is then 'punished' for their 'inaction' or 'appeasment' of an evil dictator who supports terrorism.

Do you follow me? Do you see how this could lead to a much larger military operation down the line?

"There really hasn't been any indication from the administration as to what our national interest is with respect to this particular situation," Rumsfeld, secretary of Defense when the U.S. attacked Iraq in 2003, said Wednesday evening on the Fox Business Network.

The most important issues in the region, Rumsfeld said, are "Iran's nuclear program and the relationship between Iran and Syria — the (Bashar) Assad regime — with respect to funding terrorists that go around killing innocent men, women and children, including Americans."

My theory is that Congress says no to intervention and TPTB have something much, much more insidious to begin this military conflict. That way, they maintain the democratic illusion (rather than Obama going in alone facing international condemnation) and still get their war off in the process.

As far as I am concerned, Obama reveals this in his speech today. He, like Cameron, wants intervention (because that is what his masters want). Yet, like Cameron, he is letting 'democracy' decide even though he reminds us he has the power to act without Congress.

If Congress votes no to intervention, I fear they have a plan B, a very insidious plan B.

That is, that IF it is voted against then later down the line something will be made to happen (Be it a false flag or whatever) to justify a full out assault on Syria.

It's just sickening how all these useless bastards play with the world and it's the innocent that pay the ultimate price.

I keep wondering and asking, when the hell are people going to wake the hell up?


Yeah there's a reason for going to congress, time. The U.S has ten days minimum before a vote and Labour M.Ps wanted more time to review the evidence before they voted. Both leaders are buying time to ramp up the threat level. In Britain's case it'll be a yes the second time, then citing that victory Obama will get a yes too.
edit on 31-8-2013 by EA006 because: (no reason given)

But yet Obama is ready to take out Assad.

But then, will he get approval by Congress? That is the big zit on this pimple of a problem. Obama will have to eat crow for having bad intel, if Congress says no. Major blemish there.

We have enough firepower floated into position to commence an attack.

They could really surprise us but many of their tactics are age old. That is why I have such a hard time understanding how they thought that this gas attack would buy their ticket... EVERYBODY saw this coming.
They practically spelled it out for us.

So, to think like them.... what are their options?

You know, I was expecting some very hard talk to come out of Moscow, but instead... it was cautious, condemning, firm but still careful to tip toe around fueling any ideas that they are ready and willing for open war with us.

That tells me that they might be expecting a false flag as well of monumental proportions.

The obvious would be what seems to be the launch of that Iranian nuke they have been pumping everyone up about. Now that would really get the public going, wouldn't it.

the possibilities are broad... but not endless. We should attempt to anticipate every move they make.

Originally posted by Druid42
reply to post by Wonderer2012


Reminds me of the idiots that tried to bomb Glasgow airport. Epic fail


I'm glad I'm not the only one who has at least theorised on this very possibility.

Not much attention here but if Congress do vote against intervention, then there will be endless posts saying how they think maybe US politics is looking up etc- thereby completely missing the possible set up.

People don't take the time to try and think through TPTB's stategies, ATS has become reactionary to news (often MSM) rather than a place to try and understand what is going on. It's frustrating but that's the way it is

Originally posted by Druid42
reply to post by Wonderer2012

But yet Obama is ready to take out Assad.

But then, will he get approval by Congress? That is the big zit on this pimple of a problem. Obama will have to eat crow for having bad intel, if Congress says no. Major blemish there.

We have enough firepower floated into position to commence an attack.


I personally think the whole thing has been too polarised not to be a set up.

Obama- Kerry, Cameron- Hague, they claim to be 100% sure intervention is needed and that Assad is responsible. Obama even stated that he could go without Congress, it's painting a picture and all part of the game.

Yet, both the US and UK are putting it to a vote, the UK is already out.

It's creating a scenario where UK and US look like the good guys- even though their leaders are sure Assad used chemical weapons, they are allowing democracy to decide. I think it is a blatant set up.


Ive been watching the MSM to get a gist of what the general public is getting from all this. From watching the war mongers at FNC this seems like nothing less than a setup to set a standard of public acceptance for the POTUS to go against Congress when they vote no on Syria. We are seeing the birth of a dicatator people. Congress will vote No and the president will act on what he believes is right regardless of the will of the people.
edit on 2-9-2013 by C0le because: (no reason given)
edit on 2-9-2013 by C0le because: (no reason given)


There was a poll this morning on another site asking the questions "Do you agree with military intervention in Syria" and "If not, would you agree with a military intervention if America or Israel were attacked". There was an overwhelming no to a Syrian intervention and an overwhelming yes vote if America or Israel were attacked. They are putting out their feelers for what the public would condone. Lindsey Graham has already leaked a possible nuclear attack on the eastern coastline if Obama does not strike Syria. Interesting that there are nukes missing from TX that weren't signed out for transport to Graham's territory, South Carolina. They are up to something in forming a major event that could possibly kill thousands of Americans in regions along the eastern coastline.