Valerie Jarrett - Obama's Legacy will be Immigration and Healthcare

posted on Aug, 29 2013 @ 07:01 AM
link
Valerie Jarrett says that immigration and healthcare will be Obama's legacy. Um ... no Valerie. Obama's legacy will be his incompetence .. how he brought the world to the brink of World War III in Syria ... and how he forced Americans to buy a product (health insurance) that they didn't want or need.

Does she seriously believe that this is his legacy ... or does she think that by saying this is what the legacy will be that somehow it will magically happen that way?


Um ...no Valerie. Obama didn't talk about LGBT rights. The only time he really said anything was after re-election, two days before a major LGBT fundraiser, he came out and said that he supported marriage equality. That's not exactly him working for LGBT civil rights. And he hasn't helped 'people of color' (ANY color) to raise themselves up.

Jarrett also reminded her listeners that the additional immigrants will get to vote in future elections. “We need to make sure that people who came here illegally … have a path to citizenship,” she said, prompting applause from the audience of progressive activists.


Riiiight ... the most important thing ... stuff as many people in this country as possible who will vote democrat. :shk:

As I said, I think Obama's REAL legacy will be that he took the world to the brink of WWIII in Syria (or perhaps that he pushed it over the brink ... this story isn't finished) .. and that he forced Americans to buy a product (health insurance) that they didnt' want or need.

So ATS ... do you agree with Valerie Jarrett?
What do YOU think Obama's real legacy will be?

posted on Aug, 29 2013 @ 07:18 AM
link
Obama's legacy is the US president whose congress was the least favorable among the American people in history. Or possibly Obama's fame will be the US president that had the most corrupt supreme court with judge Thomas being hand fed by the Koch brothers.

But imho Obama is just another political puppet, bought an owned as both the major parties candidates have been for decades.

Beezer posted just how big a failure it is.

What has Obama done to curtail or stop the actions of past presidents?


A lot of that are carry overs from past Presidents though.


At least people expected what they got from some of those past Presidents.

Obama campaigned on 'Hope and Change'. Not a lot of change shown yet. He is in bed with the big banks, Wall Street and Super-sized Corporations.... just like all the rest.

Now he wants to lead us into another war... just like the rest.

Originally posted by Vrill
A lot of that are carry overs from past Presidents though.


Sure. But he made them worse.

Poor foreign policies for example. Bush43 went to war in Iraq. But he went through Congress and he talked to the United Nations. But here we are on the brink of WWIII ... and Obama wants to pull the trigger without there being a direct threat to the USA ... and he wants to pull the trigger without going through congress and without talking to the United Nations as Bush43 did.

Obama owns the fact that he's just as bad ... and in many cases worse ... then previous presidents in many of these areas. Most especially .. Foreign Policy.


Just wait until Oct 1st when Obamacare starts kicking into gear. Many people don't understand the many pitfalls in that piece of legislation. Basically if you don't hate it now, you will when it goes into effect. For one most people don't realize that the more than 50 full time employees thing is a crock. A business can still have less than 50 full time employees and still be hit by the Obamacare mandates. How is this possible you may ask. Easy if two part-time employees both work 15 hours a week totaling to 30 hours, the government sees that as one full time employee. So your business could have all part timers and still have to provide health care to their employees.

This "legacy" of Obama's is going to hurt him rather then have people remember him fondly. VJ may be eating her words in a few months and regretting what she said.


Back in February when we went to get our taxes done, the people doing taxes all said that when folks go to do their taxes in 2014, they are going to be nailed by Obamacare penalties that they aren't expecting. It's going to be a shock to a lot of people.

posted on Aug, 29 2013 @ 08:11 AM
link
Oh now our little Iranian National in the White House is right. After all, I'm sure her......outside perspective... is very useful to our President. How often do we have an actual foreign national of a opposing nation as one of the most trusted and closest advisers to our own President on a daily basis? (we really aren't dreaming it... Yeah... it really is happening. )

I think she is right though. His legacy WILL be Healthcare and Immigration. They'll be topics with very ugly dark clouds over them and viciously political for a generation or more beyond what they already have been....thanks for him.

Yes... I think, as they're coming to actually happen? These seem decent items for his legacy.

His Presidential Library can feature a perimeter fence in disrepair and falling down where it counts while sporting busted burglar alarms and incompetent security while the show piece can be a broken down emergency exam room where nothing works like it's supposed to.


The best thread of the week, Fan! Bumped to the max I hope by
American lunchtine. No one can get you poor faster than a communist.

Here's the legacy from the horse's mouth. I couldn't find anything
from Time, WSJ, or can even get the source for this quote.
But in a pinch, I tend only to put credibility in things that come true
when powerful people say them-- especially with a bigger axe to
grind than a poisoned Soviet spy.

The dirt on her hands is a whole lot thicker than Resko's and she
even tanked from the last high level position.. and yet got stuck in
right after as the Queen Bee.
There's a very good reason comrade, and the legacy is the successful
completion / culmination of The Cloward - Piven Strategy
Thanks for the short list Beez, you could always get the thought out
most word-efficiently.

I believe "Hell to pay" could translate to a lot of beet soup; I hope you
don't mind Russian traditional from that line we'll all be in before Syria
cools down. Everybody making less than 2 bil a year in interest is going
to get a bowl... don't bother following the money, it's all gone.
And when the metal Molotovs fly internally, we'll flip back into good old
fashioned hard fascism just like Germany. Then if you don't show your
papers in 20 seconds they'll just taze you to death.. oh wait, already happening.

posted on Aug, 29 2013 @ 09:28 AM
link
Lol brink of world war III? we're talking about a strike consisting of a few cruise missiles...we're not talking about invading a country...in fact no attack has even took place yet.

Originally posted by muse7
Lol brink of world war III? we're talking about a strike consisting of a few cruise missiles...we're not talking about invading a country...in fact no attack has even took place yet.


What spark started World War I?

2012 marked the fourth straight year—and the only four years in the history of the nation--when the federal government’s deficit topped $1 trillion.

Last year’s $1.087 trillion deficit was even greater in inflation-adjusted dollars than the peak World War II deficit of fiscal 1943—which was $54.554 billion in 1943 dollars and $723.8714 billion in 2012 dollars, according to the Bureau of Labor Statistics online inflation calculator.

Obama talks about how he will cut the deficit in half during his first term - and why it's so important. Really? The 2008 budget deficit was 458 billion. Obama's proposed new budget for this year has a deficit of 1.1 TRILLION. For God's sake - WTF???

Obama IS the first $5 Trillion Dollar Deficit Man and should be 'credited'. 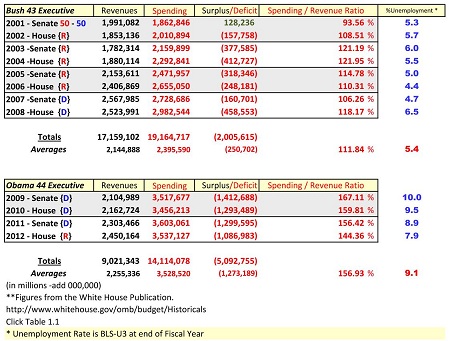 And I wonder what the Obama Presidential Library will look like ? 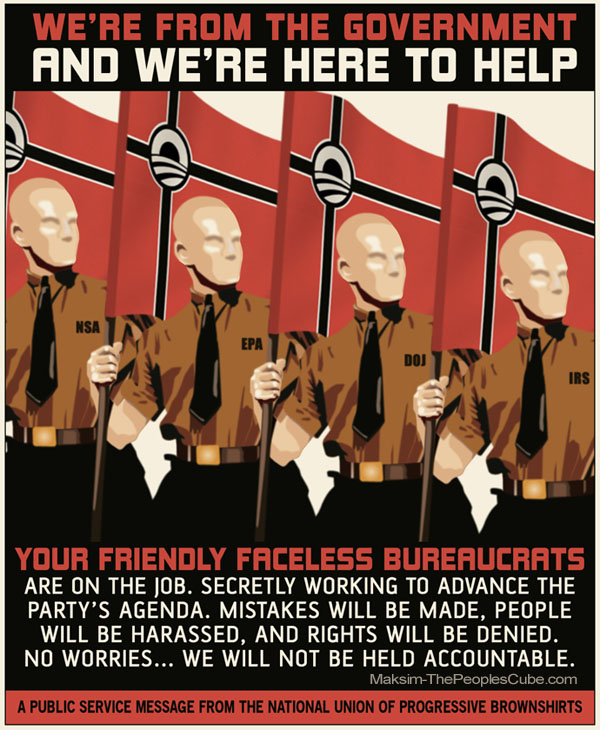 For the reasons that have already been listed with the addition of spending $10 trillion dollars+.

Spending more than all the president's who came before him, including the last guy. and a legacy of rewarding those people who break the law(immigration).

His legacy of having over 150 million Americans on 'government ran 'healthcare'.

That is something to really be proud of. ain't it Jarret ?


Educate yourself. China. Russia. USA. France. UK. Syria. Lebanon. Israel. Egypt. Iran. Turkey. Muslim Brotherhood. Hamas. Hezbollah. They are all pointing their weapons at each other. Those players easily have the makings for a World War.


So you think Americans who can't afford the insurance tax or who don't want it should be forced to buy it eh? Lovely.


Have fun in the echo chamber


Have fun sitting in the dark hugging your 'yes we can' button.

So true. Obama's symbol wont' be that red, white and blue sunrise thingy ...
His legacy symbol will be a jackboot at the backs of the necks of Americans.
Forcing them to buy a product (gov't insurance) that they dont' want and can't afford.