The largest rocket ever to be launched from Vandenberg Air Force Base had a succesful lift-off Wednesday.

The Delta IV Heavy rocket was launched with a $1 billion spy satellite for the National Reconnaissance Office (NRO) “in support of national defense,” according to aerospace engineering firm United Launch Alliance (ULA).

Eagles and snakes in the depiction, it will be interesting to learn more. 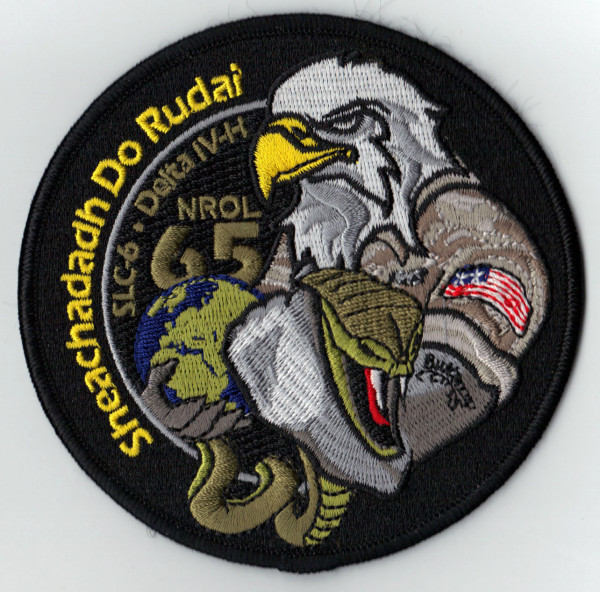 'Sheachadadh': to deliver.
"Sheachadadh do rudai" translates from Gaelic as
"deliver your stuff".

The tattoo on the Eagle's arm/wing reads "Buttercup".

There may be a suprise payload.

losangeles.cbslocal.com
(visit the link for the full news article)
[1] This is a hint
edit on 29-8-2013 by burntheships because: (no reason given)

It has been more than two years since Vandenberg Air Force Base, Calif., was rocked by the
thunderous roar and titanic rattle of the world’s largest rocket currently in active service.

Although the Delta IV Heavy has launched several times from Cape Canaveral Air Force Station,
Fla.,it has flown just once from the California site. On 20 January 2011, it delivered the NROL-49
reconnaissance satellite into orbit for the National Reconnaissance Office. On Wednesday, 28
August, a second Delta IV Heavy is slated to roar aloft from Vandenberg, carrying another
classified NRO payload, known only as “NROL-65.”

..Unsurprisingly, both United Launch Alliance (ULA)—who is responsible for Wednesday’s
launch—and the Pentagon are remaining tight-lipped about the precise nature of NROL-65
www.americaspace.com...

And we already know a vehicle's computer can be hacked.

Sounds like a plan that could be used for assassinations !!

Damascus, Syria (CNN) -- The United States has concluded Syria carried out chemical weapons attacks against its people, President Barack Obama said Wednesday, a claim that comes amid a looming diplomatic showdown over whether to strike against Bashar al-Assad's military.

Obama's declaration to "PBS NewsHour" came at the end of a day that saw Russia and China walk out of a U.N. Security Council meeting as word surfaced Britain planned to pursue a resolution to authorize the use of force against Syria, even as United Nations weapons inspectors were in Syria assessing whether chemical weapons have been used.

"We do not believe that, given the delivery systems, using rockets, that the opposition could have carried out these attacks. We have concluded that the Syrian government in fact carried these out," Obama told "NewsHour."

"And if that's so, then there need to be international consequences," the president added.

Well, I guess its a wait and see.


Indeed, since we are on the typical black budget delayed by 50 years,
I would wager a decent bet they have been reading that small print from
long ago. Lets hope this does not get real.


I was reading a technology piece on Fox News and it was talking about a guy who had an RFID chip implanted in his finger. It was no bigger than a grain of rice and could only store I believe 1kb. However, it makes you wonder if all this is being put into place to start tracking people using unique RFID chips.

What did this man put in his hand?

So you can bet this is far more advanced than that.

posted on Aug, 29 2013 @ 08:43 AM
link
I heard this on a science show not too long ago on the radio, that those wonderful Saturn rockets that were used in the Apollo project that people bemoaned abandoning, were not any more powerful than the new Delta rockets in use today.
I thought that seemed funny to me but it could be true and the person saying this was a science reporter who seemed to know what he was talking about.
I remember some years ago trying to get on top of a bridge's high point (on the sidewalk) at night to watch a Delta launch to the outer solar system, in Florida, some couple hundred miles away and it was impressive enough to me, not quite as spectacular as a space shuttle launch though.
edit on 29-8-2013 by jmdewey60 because: (no reason given)


Yes, I'd say this is far advanced,
Geosynchronous orbit - part of (said to be the last) Mentor, or Advanced Orion rumor has it.
Whatever it is, it is huge.
edit on 29-8-2013 by burntheships because: (no reason given)


Yes, my thoughts too. Tungsten is heavy.

'Rods from God'
Hypervelocity rod bundles - solid tungsten cylinders, 20 or 30 feet
long and one or two feet in diameter.
edit on 29-8-2013 by burntheships because: (no reason given)

Do you recall that strike years ago? It was a bit mysterious and if I recall
right there were sat photos before and after. There was never a clear claim
on what too place but something obviously did like something kinetic that traveled at
speeds of more than 10,000 feet per second, penetrating deep into the earth
without any explosives.
edit on 29-8-2013 by burntheships because: (no reason given)

I work under the theory that the real top weapons are about 30-50 years more advanced than the ones they let you know about.

In which case, God himself only knows what could really be in that thing.
edit on 29-8-2013 by khimbar because: (no reason given)

They have been able to tell what kind of car your driving from space for decades now.

"Classified info, but we will tell you what its capable of " .

Just another tool to destroy freedom at the tax payer expense.

Damb we just throw billions around


Interesting thing about the 'Rods" speculation is that they are a
non nuke payload - 'conventional' .

I recall that General Dempsey indicated they were considering kinetic
strikes a few months ago. This could be it.

Originally posted by MajorAce
At 2:30 to 3:30 in video noticed flames on side of motors . Possible leaks or burn through ?
edit on 29-8-2013 by MajorAce because: (no reason given)


Exhaust from the powerful turbo pumps that drive several thousand pounds of fuel per second into the combustion chambers.

I already know somewhere is a Google Earth with me in the desert needing to relieve myself. There is no right to privacy.

Well, at least there was some small victory over the RFID. Good for her! Student Suspended for Refusing to Wear RFID Chip Returns to School. No more RFID for Northside ISD