posted on Aug, 14 2013 @ 07:24 PM
link
United Nations Office for Disarmament Affairs will disarm US citizens through a graduated process to include:


…codification of national laws to disarm civilians within their borders…

Link to Discussion about the authenticity and orgin of the document

Searched ATS to see if this is posted already, having found no link, here it is. Apologies to the moderators if it turns out that it has been posted elsewhere.

Terms and Conditions of Use--Please Review
edit on Wed Aug 14 2013 by DontTreadOnMe because:


Good luck to them!!

I’ll be part of the welcoming committee! 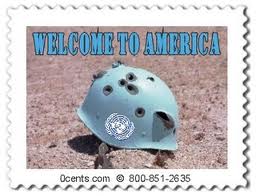 
I am sure that there will be many (though I don't know any) people who "may" have firearms that aren't registered with anyone.

*whistles and walks away*

posted on Aug, 14 2013 @ 07:38 PM
link
A dollar will get you a knob of goat dung that it's scaremongering hoax cooked up by some nutjob anti-NWO/UN/other idiot.....why is it that all the fake drivel is generated by those who need a conspiracy to believe in??

The Constitution is exceptionally clear that no outside treaty, alliance or authority supersedes it's own authority. Period. No footnote with further explanation or exception to look up. The last I checked, the DC Vs. Heller Decision had the 9 Robed Ones saying I can have my guns and no one can say squat about that.

So... If the UN wants to go collect up the Chinese litter across central Africa otherwise known as AK-47 rifles? More power to 'em. If they are thinking about the US in the most passing way? Well... They need reading lessons. I believe about 100 Million known gun owners will gleefully assist them in that effort, too. (I know I will!)

The UN has exactly ZERO authority to 'ban' anything out of civilian hands.

Not only a second amendment right but also a ninth.

The ninth says no authority granted to government can be interpreted to deny or disparage any rights even those not specifically listed (preserved) by the constitution.

Anyone thinks the UN can do this THEY CAN'T.

Anyone thinks the US government can 'regulate' guns ?

That is because of the interstate commerce clause that has been perverted to the military, the police and the criminals being better armed than us regular joes.

And if that is what they call 'well regulated' I got some swamp land to sell them.

Hell anyone supports the UN or further VIOLATION to their constitutional rights is a supporter of FASCISM.

Keep your hands off my guns that goes to all,

posted on Aug, 14 2013 @ 07:46 PM
link
Well, if that happens they will probably have to kill me first as I will be referring to Rule #7 according to The Rules of Gun Fighting.

7. Someday someone may kill you with your own gun, but they should have to beat you to death with it because it is empty.

However if they bring their own guns I'm with Beezzer.

Originally posted by Wrabbit2000
Well the UN can just go play Dixie while blowing it right out their tanks.

The Constitution is exceptionally clear that no outside treaty, alliance or authority supersedes it's own authority. Period. No footnote with further explanation or exception to look up. The last I checked, the DC Vs. Heller Decision had the 9 Robed Ones saying I can have my guns and no one can say squat about that.

So... If the UN wants to go collect up the Chinese litter across central Africa otherwise known as AK-47 rifles? More power to 'em. If they are thinking about the US in the most passing way? Well... They need reading lessons. I believe about 100 Million known gun owners will gleefully assist them in that effort, too. (I know I will!)

Indeed. Confiscating guns has and will always be a stupid idea. For one, it's wrong because you're punishing someone for the actions of others (school shootings, homicides, robberies, etc.), and two because the people they're trying to confiscate from have guns.
edit on 14-8-2013 by technical difficulties because: (no reason given)

I hope you realize that you just put yourself on the top of their list.

Originally posted by CosmicCitizen
reply to post by seabag

I hope you realize that you just put yourself on the top of their list.

I fit almost all of the criteria laid out by Napolitano. If I join a White Supremacist group I'd have the criteria wrapped up.

I won't be the only person who stands for the constitution. There are many who won't put up with losing the 2nd amendment. 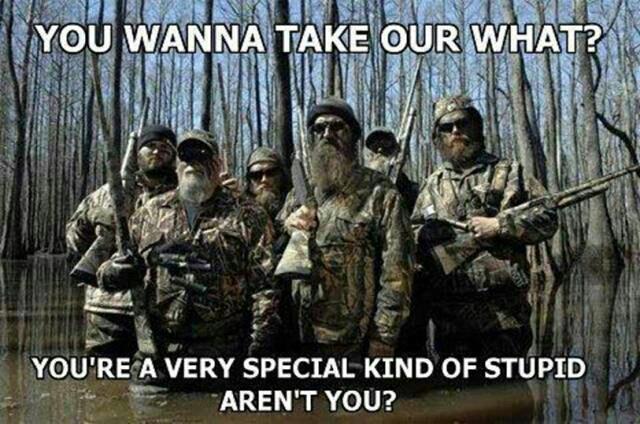 If true I would start getting worried about that NWO stuff.

posted on Aug, 14 2013 @ 08:29 PM
link
While I don't doubt the overall agenda by some facets in power to disarm the average citizen . . . It appears this document is a cleverly constructed fake.


I love how these guys fall for this EVERY SINGLE TIME!

It cracks me up how they get their panties in a twist.

Do you know who the real single biggest threat to gun ownership is in this country? It's gun rights advocates themselves.

posted on Aug, 14 2013 @ 08:42 PM
link
So what are the odds of the UN (based in NYC, NY) remaining based (in NYC, NY) if they actually try to remove over 300 million guns from over 100 million people in the US? Especially given the fact that the US military has (in)conveniently left some 50 million pieces of military grade small arms equipment in each of the 50 states and some 2 million pieces of military grade non small arms equipment. Consider also all that ammo that the Federal Government has been buying has to be sitting somewhere that would be impossible to keep under lock in key if just oh say 500,000 people really wanted to acquire it as a means of self-preservation to what they thought was their way of life?

I think the UN hasn't really thought this through completely.

We'd be talking about 3 million active and reserved United States military personnel
plus 95 thousand U.N. soldiers against what...

Yeah. Good luck with that.

By way of comparision, that would be like 1 dude walking up to 74 armed men and telling
them to hand over their guns, and that's assuming this dude would be willing to
comply to this new law himself and surrender his own 2nd amendment rights
once all was said and done.


That why they will do it in stages.


No they will try all other methods that dont require force.


Take handing your guns in for compensation?

They may very well turn 200 million guns out there to 100 milion guns.

Then you have the idea of slowly indroducing new regulations on what considerd a "Militray Weapon". That may get a few hundred thousand hand in especialy when combined with cash.

They will stop you buying new ones obviosly. So that leaves ones out there or black market ones. Now guns will break over time and Im sure they will stop the selling of spare parts. So that will remove a few million. Then ammunition think about that? Whats a gun with out bullets. If they stop the sale of bullets then only the most hardcore or those with stockpiles will have a working gun, evrryone else else will have club Of course they will restrict bullet makeing and equipment relating to that.

So after 20 years you have maybe what a couple of million working non hunting related guns? And a very limited suppy of ammo.

And over that 20 years you will have anti gun propaganda being spread like the common cold.

This wont be overnight, you wont be so luckly.

Originally posted by CosmicCitizen
reply to post by Aloysius the Gaul

At least it is real. Here it is for anyone not familiar with it.

But even it is nothing at all to do with personal firearms. You do realize that it is entirely about national armed forces don't you??

And given that one of the main arguments for guns is defence of liberty against big govt (etc) I would have though gun nuts would have been quite keen for the size of well armed and organized military forces around the world to be decreased.
edit on 14-8-2013 by Aloysius the Gaul because: (no reason given)


It'll never happen. It'll be prohibition all over again, but instead of moonshiners selling booze, they'll be dealing in arms and ammo. There are too many people with the means to make their own ammunition, and now we've got people capable of machining their own firearms, hell printing their own guns.

If they want to weaken the population for the sake of control, they'd do better to release a virus first and then move in and clean up afterwards.