Testicle-Biting Fish May Be Invading Denmark

Danish skinny-dippers beware: A piranha cousin rumored to go after testicles might be invading brackish waters near Copenhagen. On Aug. 4, local fisherman Einar Lindgreen was going through his catch after fishing in the Oresund, the strait between Denmark and Sweden.

Besides the eels and perch, Lindgreen also netted an exotic fish suspected to be a red-bellied pacu, which is native to the Amazon and has uncannily human-looking teeth. "It's the first time this species has been caught in the wild in Scandinavia," fish expert Peter Rask Møller of the University of Copenhagen said in a statement.

"Discovering whether this fish is a lone wanderer or a new invasive species will be very exciting. And a bit scary." [Photos: The Freakiest-Looking Fish] The toothy South American fish has crept into lakes and rivers far outside its native range, likely after getting loose from aquariums and fish farms.

Though its teeth are used mainly to crush nuts and fruits, the pacu eats other fish and invertebrates and there have been some reports of human attacks. In Papua New Guinea, the invasive species has reportedly earned a reputation as the "ball-cutter" after castrating a couple of local fishermen. The specimen snagged by Lindgreen measured just less than 8 inches (20 centimeters) long but the pacu can grow much larger.

Some can even weigh as much as 55 pounds (25 kg), according to the University of Copenhagen. According to Møller, amateur aquarium owners and fish farmers are the "usual suspects" when an exotic fish like the pacu ends up on the loose.

This fish gives me the creeps, the teeth are weird
And how did they end up in Denmark if they're native to the Amazon

posted on Aug, 13 2013 @ 10:05 AM
link
I believe alot of the variations in nature are coming from Rockefeller's laboratories, the underground ones. They have hideous plans for earth.

Though its teeth are used mainly to crush nuts and fruits, 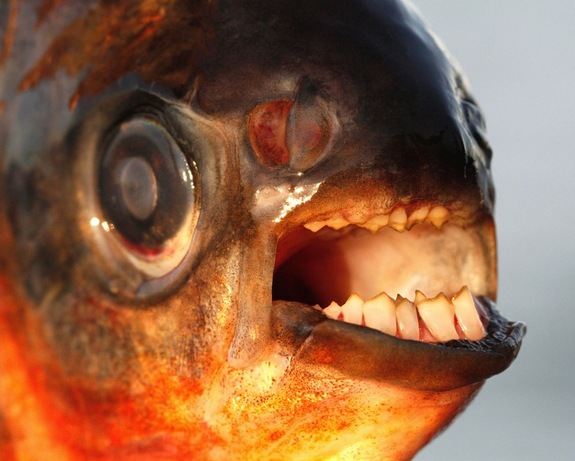 According to the Wikipedia page for Pacu they have been found in 32 different US states.
They do have one saving grace, they are good to eat:


Theodore Roosevelt wrote of catching and eating pacu in his book Through the Brazilian Wilderness. He described them as "good-sized, deep-bodied fish," and noted, "They were delicious eating."

Though its teeth are used mainly to crush nuts and fruits,

posted on Aug, 13 2013 @ 10:10 AM
link
They were probably inadvertently released during that there tsunami that smoked japan though, I figure a lot of people went back to the slab that used to be their house and never even thought about what happened to their aquarium till about a month later, maybe never,,..

Originally posted by luciddream
It must be a Feminist Fish.


Henceforth, I shall call the pacu the Feminist Fish because it is so fitting

I'm not a male, and thus had no jewels to guard, but it sure makes me wonder...if they'll go for those globes, what about female ones? Guard my hooters? I think I'd rather chance it & swim with the sharks & barracuda


I think its probably because when skinny dipping... the *ahem* nuts, just dangle like a treat for them.

I never skinny dipped anywhere other than the comfort of my own home.

There isn't a guy that read this thread that didn't grab his crotch and say "It's okay boys, I won't let them get you".

posted on Aug, 13 2013 @ 11:17 AM
link
I think ill wait until they have at least found two of those fish before i start to worry. Probably just been set free from someones home.

posted on Aug, 13 2013 @ 11:21 AM
link
reply to post by sarahlm
Ooooooh snap!
Don't go in the water boys! (Well, unless you like that sort of thing)
Something like this could have people avoiding the water in the way the movie Jaws did when it hit the theaters. Protect yourselves! If you must swim wear a steel plated cup!

Originally posted by MyHappyDogShiner
They were probably inadvertently released during that there tsunami that smoked japan though, I figure a lot of people went back to the slab that used to be their house and never even thought about what happened to their aquarium till about a month later, maybe never,,..

Uhmm... Sure and those fish did swim through the artic region over Alaska and Canada to reach the Atlantic in search of brackish water in the inner sea near Denmark and Sweden. Or did they go under Africa?


they're a very popular fresh water aquarium fish only pet stores don't tell you that the quarter sized piranha lookalike gets huge in a very short amount of time. We had one, a while back, with a couple of other nasty fish, and the pacu would eat anything we fed it, including hot dogs.

When they get too large for the home tanks, many owners, rather than euthanize their pet, will release it into a local pond, lake or other body of water. This happens with snakeheads too, resulting in a foreign fish, with no true predator, in a body of water that becomes nothing more than a giant feed zone.

Brackish means salt and fresh water mixed, the Oresund strait is directly exposed to the ocean and fish have this uncanny ability to move under their own power.

It isn't an impossibility that they came from Japan.

posted on Aug, 13 2013 @ 01:12 PM
link
hmm...is this nuts about fishing or fishing about nuts...good thing they don't like to eat tubular underwater grass rods


I cant wait to go denmark and go swimming!

posted on Aug, 13 2013 @ 01:25 PM
link
The Nutcracker, Ouch. That has to be one of the worst ways to lose your balls. A great deterent for rapist, give them one look at this fish, with the requirement of getting his balls eaten if he violates any women or men. that would solve a lot of the problems