The Day The World Moved : Countries are out of place


how should WW2 have played out differently?

Conclusion- In THIS timeline nothing has moved........

posted on Aug, 13 2013 @ 03:31 AM
link
I just love going to car boot sales and buying books, especially world atlases, its quite difficult to alter those without it showing, unlike wikipedia, I have two readers digest world atlases now, one dated 1967, and the other dated 1997.
Both world maps tally, just countries names have changed.

France was not on the German border

That right there is a very ridiculous statement. How do you explain such historical events as the two World Wars or the Franco-Prussian War?

It's hard for me to believe this isn't just geographical ignorance on your part.

I can only think that it's one of two things:

2) Some sort of alternate reality


You're not the first to mention such things on ATS and I'm wondering whether you had read previous threads before thinking like this.

All that being said I have two small scale personal instances of a similar nature. They happened only a few days ago and actually just days apart. I won't go into details too much, because I was thinking I must be mistaken although I was adamant I wasn't.

The first instance involved me watching one of my favourite episodes of a television series. There was a particular scene I liked and often remembered. I watched the episode a few days ago (it had been about two years since I'd last seen it) and the scene was the same but didn't play out exactly as I remember it, nor in exactly the same setting. At the time I was thinking "that's not how I remember it", but thought I must be mistaken.

The second instance was looking through a large amount of family photographs. I came across a photograph from years ago which happened to show our pet cat in the background. I would have bet my life on the fact that this particular cat had actually died several years prior to the taking of that photograph, at a different house to the one in the picture. I was perplexed and looked at the photograph for a long while.

I like to think I have a very good memory, but then again it's certainly not infallible. I can't think of any reasonable explanation so I just must be mistaken and or confused.


Originally posted by 001ggg100
Serious question for the OP.... If you do not believe in alternate timelines, then how would you explain the issue you and others like you have with the current map of the World?

Honestly ......... i have no idea . But the thought of alternate timelines doesn`t slide with me since nothing seems to have changed historically ... from what i can see . Hitler , Stalin , Kings Queens , Politicians , wars ... everything seems to be the same apart from the positioning of the countries .

But that's the whole point about "alternate" dimensions and/or timelines. If quantumly speaking, all things are possible but happening concurrently, then history would, indeed, be all over the place. Not only that, perhaps even within just one dimension, through time dilation and repetitive circling back, histories can be erased and replaced. And the same would reflect geographically, as the macrocosm is to the microcosm.
Tetra50
ETA: I think it's become quite obvious to many that nothing is where it should be, nor where they once thought it was, or even what it was/is......


how should WW2 have played out differently?


I find that a very difficult question, indeed, because I'm not so sure we know how it actually turned out anyway.....
There's always an official version, and then there's something closer to truth.

Originally posted by Freeborn
This again,

For a long time now I have been biting my tongue in fear of being ridiculed , whilst at the same time paying attention to the posters all over the internet describing how they think countries have moved around some .

I do not believe in different timelines , which seems to be the favourite explanation for this ... and it seems that a lot of people think certain countries were in different places . The main country in question is New Zealand , many people seem to be saying it was to the south west of OZ and has moved to the other side .... however ... I remember New Zealand being to the North East of Australia .. and Australia its self was nowhere near Papua New Guinea .

Now , if you float around the internet you will find quite a few people that claim OZ and New Zealand have moved ...... but I also have a problem with Europe and America .

From what I remember , the Netherlands and Germany were East - slightly northeast of England ... Hungary was to the west of Germany and closer to England ... France was not on the German border (what the flying monkey f***) Sweden Norway and Finland were not as large as they are now ... and now the Baltic sea is where Germany should be .

America seems to have moved south and tilted clockwise . I remember if you drew a line directly east from New York you would cross through Scotland .

Greenland is oversized and has moved south along with Iceland .


I expect people to try and trash me .... but I`d like a conversation on this since I honestly do not know what the hell is going on here and I`m tired of sitting in silence .

Has anyone else noticed similar changes to the globe ? If so , do you have any old schoolwork or something where you yourself hand drew Europe , America , OZ .... you know , from geography classes or something ?

I myself have no old schoolwork , and I know for a fine fact that I had to draw different countries when I was at school , and specifically remember Europe being completely different to what it is today , and New Zealand being north east of Oz .

If you think I`m nuts then you`re not the only one , I`m starting to think that myself to be honest.


This nonsense has been on ATS before and shows how ignorant some people are, especially in the USA.
Having sailed all around the world, I can tell you that countries have not moved recently.


I hate to say it, but I might have to somewhat agree with you. I have noticed that more often now the clouds in my area are moving in an entirely different direction then they use to. I notice it every day... i mean, unless there is a permanant jet stream running north to south now.. or south to north... shi* now i'm turned around again.


I have an old Britannica Atlas that was published in 1980. I got it in 1983 from a school that was going to throw it away because the binding had been damaged.

It has both topicgraphical maps and geopolitical maps in it.

I can snap pictures of anywhere you want in it and post the pictures here in this thread if you like. 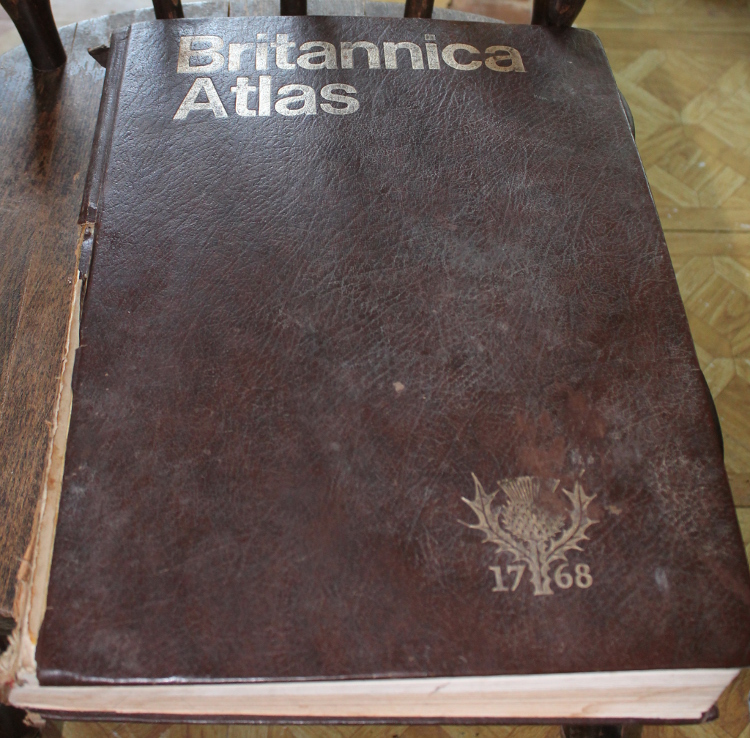 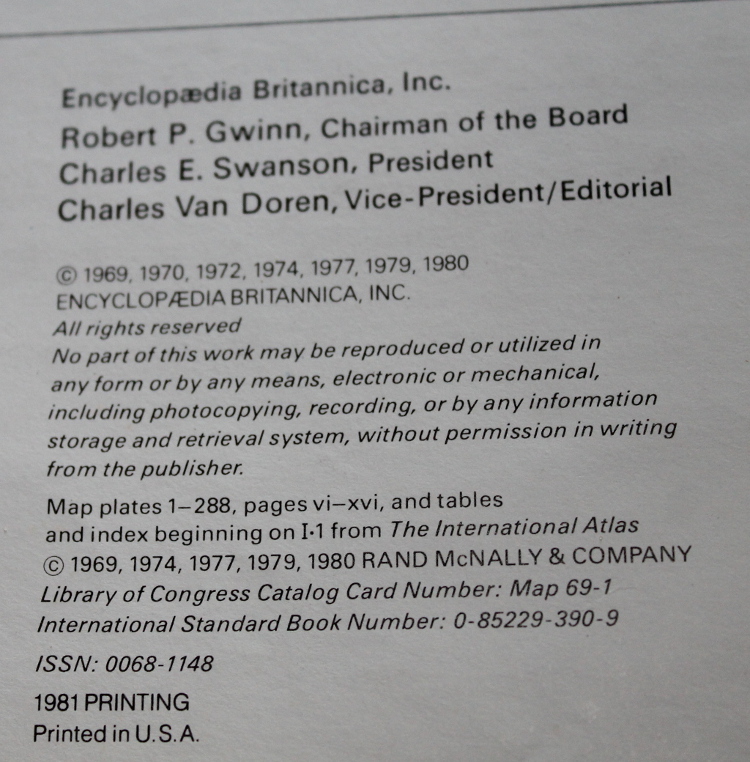 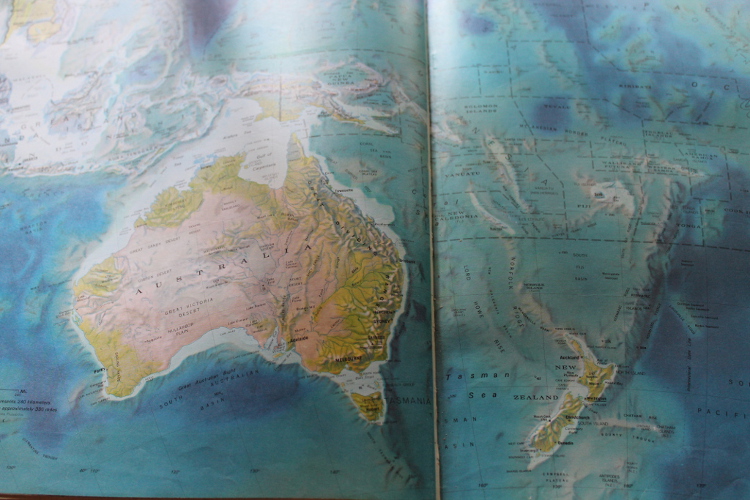 Europe (note the age, there is still a West and East Germany and other countries that do not even exist anymore) 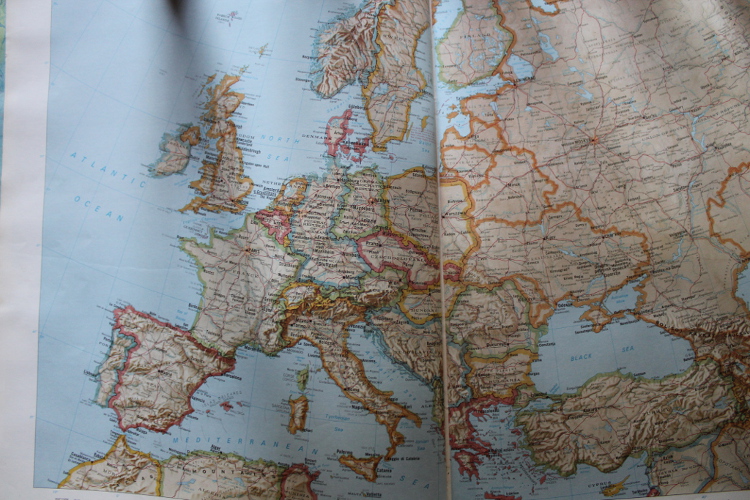 
How bizzare... NZ is right where it ought
to be.

Thanks for posting some normality.

If you were looking at a map of just Australia, Indonesia would be on top of Australia. Sometimes maps of a single country will show landmass close by, but in no detail, just the outline with a solid color inside.

If a kid in school was looking at such a map, without prior knowledge of the specific area, but still knew NZ was right by Australia, they could mistake a part of Indonesia as being NZ. It seems most people who think things are out of place thin that NZ should be around the upper right corner of Australia. Right where Papua New Guinea is.

So I propose that people, as children without much geographical knowledge, mistook Papua New Guinea for NZ. This idea was cemented in their minds, and as adults they still think NZ is upper right to Australia, when it's in fact not. (yes I realize the island I am referring to is half Indonesia and half Papua New Guinea, I'm just calling it Guinea to make it easy)

That makes sense to me and satisfies my curiosity of why I personally thought that NZ was north northeast of Australia, and that both where in the middle of the ocean with no other countries nearby.
edit on 13-8-2013 by James1982 because: (no reason given)

From what i see it looks like Oz has moved North West , i don't remember it being anywhere near Papua New Guinea , infact i remember Oz being completely surrounded by open sea .


More a problem with your memory than the islands moving.


I remember New Zealand in the northeast corner too, but that's because the 80s Risk game board had it positioned there, next to Papa New Guinea. Maybe Parker Brothers should be sued cause their inaccurate portrayal of continents just may have been the sole purpose for all these people on ATS going nuts.

Anyway, here's the only pic I could really be bothered to grab. You might have to squint. 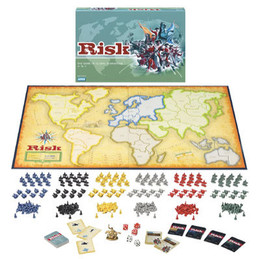 From what i see it looks like Oz has moved North West , i don't remember it being anywhere near Papua New Guinea , infact i remember Oz being completely surrounded by open sea .


yip that is what i remember as well from school maps

as "signalfire' metioned in his post (with ethe clip from the TV show The West Wing), different map projections could yeild different-looking maps.

This is because the earth is a sphere (obviously), abut most maps are flat. When map makers make their flat maps, they "project"/stretch the spherical Earth onto these flat rectangular surfaces. For example, that's why Greenland looks HUGE on many old school maps.

The Earth isn't changing, but the way flat maps are made does change.

posted on Aug, 14 2013 @ 08:36 AM
link
This may be a little off-topic, but here is an interesting geography tidbit that most Americans probably do not realize...

The City of Reno Nevada is farther west than Los Angeles.

Most people would probably think Los Angeles is farther west (farther west than just about anywhere else in the U.S.), but then those people probably never really compared the locations of the two cities on a map. 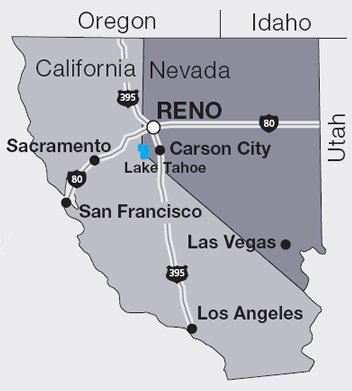 France was not on the German border


The people of Alsace-Lorraine would be amazed to hear this. As would those who constructed the Maginot Line specifically to prevent an invasion of France by Germany across the ~450km border shared by the countries. As would the people of the Benelux countries who were rolled through by the Germans to avoid the previously mentioned Maginot line.