posted on Aug, 12 2013 @ 06:52 PM
link
I tried the Ats search but couldnt find much related to this specific photograph.. it didnt help that there are a million different NASA or space threads either.

This is a photograph from the Apollo 8 Mission as claimed by the author of the webpage. I have never seen or heard of this image. Which is obviously why I'm bringing it to the Ats crowd, as I am sure someone here has more information on it. It would save me from going through many pages in the search engine.

I have my own idea about what this may be. I was curious what you guys thought of it, and if we can figure out what it is.
Here is a little background on the Apollo 8 Mission to the Moon, and back:


Apollo 8, the second manned mission in the United States Apollo space program, was launched on December 21, 1968, and became the first manned spacecraft to leave Earth orbit, reach the Earth's Moon, orbit it and return safely to Earth. The three-astronaut crew — Commander Frank Borman, Command Module Pilot James Lovell, and Lunar Module Pilot William Anders — became the first humans to travel beyond low Earth orbit, the first to see Earth as a whole planet, and then the first to directly see the far side of the Moon. The 1968 mission, the third flight of the Saturn V rocket and the first manned launch of the Saturn V, was also the first manned launch from the John F. Kennedy Space Center, Florida, located adjacent to Cape Canaveral.

Originally planned as a second Lunar Module/Command Module test in an elliptical medium Earth orbit in early 1969, the mission profile was changed in August 1968 to a more ambitious Command Module-only lunar-orbital flight to be flown in December, because the Lunar Module (LM) was not yet ready to make its first flight. This meant Borman's crew was scheduled to fly two to three months sooner than originally planned, leaving them a shorter time for training and preparation, thus placing more demands than usual on their time and discipline.

Apollo 8 took three days to travel to the Moon. It orbited ten times over the course of 20 hours, during which the crew made a Christmas Eve television broadcast in which they read the first 10 verses from the Book of Genesis. At the time, the broadcast was the most watched TV program ever. Apollo 8's successful mission paved the way for Apollo 11 to fulfill U.S. President John F. Kennedy's goal of landing a man on the Moon before the end of the 1960s. The Apollo 8 astronauts returned to Earth on December 27, 1968, when their spacecraft splashed down in the Northern Pacific Ocean.

First time seeing the darkside of the Moon! Would be interesting to see those pictures. Especially the ones NASA didnt release..

So shoot away Ats! Like I said, wondering if anyone has good information on these pictures, and Im curious what you guys think

posted on Aug, 12 2013 @ 06:58 PM
link
Reminds me of a old 1950's concept drawing of a military permanently habbitable space station. Il have to see if i can dig the book out. I think the book disscused it as part of a possible orion mission or something.

The rings were ment to spin to create gravity while the center is for docking.

Most likely just a a light reflection but its odd...
edit on 12-8-2013 by crazyewok because: (no reason given)

Is it possible it's some kind of reflection from the window or something?
edit on 12-8-2013 by ShadowLink because: Smaller picture

The MOL program was announced to the public on December 10, 1963, as a manned platform to prove the utility of man in space for military missions. Astronauts selected for the program were later told of the reconnaissance mission for the program.[1] The contractor for the MOL was the Douglas Aircraft Company. The Gemini B was externally similar to NASA's Gemini spacecraft, although it underwent several modifications, including the addition of a circular hatch through the heat shield, which allowed passage between the spacecraft and the laboratory.[2]
MOL was cancelled in 1969, during the height of the Apollo program,

Well there was this before Apollo 8, but it says they never got it up there.
edit on 12-8-2013 by Thorneblood because: (no reason given)

posted on Aug, 12 2013 @ 07:12 PM
link
Wonderful image, thanks. The Earth looks so incredibly beautiful from space. As for the image, I have seen this before, but never really followed it up more firstly because I am supremely forgetful, and secondly as it seems to be very difficult to judge anything regarding distance from camera or size. So, perhaps some of the great researchers here will point us to A) The explanation or B) More relevant information about the image. Thanks again, s+f 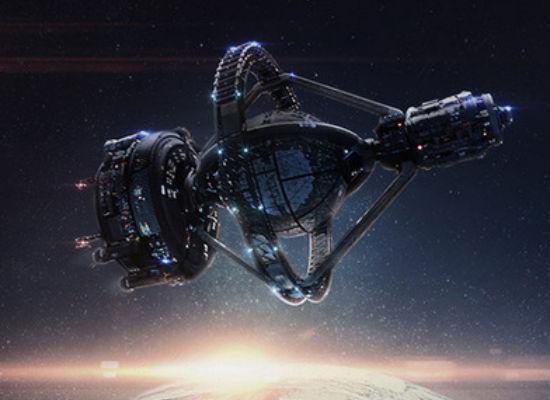 This has to be some sort of Ender's Game promotion.

posted on Aug, 12 2013 @ 07:18 PM
link
if i see your three picture.its move very away..look at the third one..and look at the first..its change position..and the earth position moved too, i think its a light..if thats a spacecraft or rock it will shine a lot..comphare it to the earth very shiny eventhougt faraway from that thing..but very nice op..s&f
edit on 12-8-2013 by cheesy because: not moon but earth

Is it possible it's some kind of reflection from the window or something?
edit on 12-8-2013 by ShadowLink because: Smaller picture

Cardassians are about to get us?


Very interesting pictures especially the second one. Maybe a gas cloud from one of the booster rockets.

The first thing that came to mind is one of those Vulcan Starships from Star Trek Enterprise.


In the second one, the light reflection is clearly different from that of the light hitting Earth what makes me believe that it may be an artifact added to the image, from the processing or a reflection on the lense.


She is so beautiful isn't she? We are blessed to exist on such a beautiful and abundant planet, we forget it is our only chance to exist in this infinite universe.

Thank you for posting Jonjon


Hmm.. it would seem that someone 'cleaned' this picture up, and added the ring thingy?

If that is the original, then we can definitely call HOAX on this one. Thank you wmd!

This has to be some sort of Ender's Game promotion.


Awesome pic k4e! Thanks for stopping by my friend

Anyways, that's an awesome picture! Wasn't there an article here a few months back about our solar system being surrounded by some sort of ring that would be impassable by a spaceship?

Those pictures are crude fakes created by someone so ignorant of astronomy (and even of the obvious) that he did not realise that the sun should be illuminating the ring on the same side as it illuminates the Earth, Moon, etc. Basic fail.

Originally posted by Astyanax
reply to post by covertpanther

Those pictures are crude fakes created by someone so ignorant of astronomy (and even of the obvious) that he did not realise that the sun should be illuminating the ring on the same side as it illuminates the Earth, Moon, etc. Basic fail.

maybe you're just looking at it sideways....

BUT...you could be onto something...