Egypt's cultural heritage is in danger. Grave robbers, sometimes heavily armed, are taking advantage of political chaos to plunder its poorly guarded archaeological sites. Authorities feel powerless to stop them and fear that ancient treasures might be lost forever.

Not much to say, of course I am not surprised.

tombs, possibly full of treasures from the age of the pharaohs. Archaeologists have partially mapped it but never exhumed its contents, as is the case at many sites in Egypt.

So much will be lost, the historical record of so many cultures.


This is indeed a great shame.

However, this does not surprise me. Taking into consideration the situation in Egypt and overall mentality of the masses, it was only a matter of time. Unfortunately!

posted on Aug, 4 2013 @ 09:52 AM
link
This has been going on for some years now, but getting worse as we speak, also new buildings and irregation fields are being constructed on top of archeological sites and with the use of materials allready there.

They are slowly destroying sites and there is no one to stop them, not to forget that turisme in egypt is declining rapidly so the money to maintain protection of these and other sites are getting lower and lower.

Originally posted by BaronPampa
reply to post by Stormdancer777


Hello Stormdancer777! Glad to see someone say what you said!

No matter, don't worry!!
By bold research, I have already arrived at the conclusions which THEY want you to NOT know!

Please see this website* for details, my work on ancient history, which fully unravels the mystery of Egypt (and exposes certain lies in the bibles) is available for free, though I hope you like what i write and buy the books on it which i sell!

posted on Aug, 4 2013 @ 11:19 AM
link
Its safe to say that the robberies are anything, but random and I'm sure that TPTB are taking full advantage of the opportunity to get their hands on materiel otherwise out of reach for even them...

Maybe they are connected, the timing is right.
Looking for something specific?

the military and police in the south of egypt are on point...

the police in cairo..are now back in full force

these stories are funny because

these so called "known untouched tombs"....the term is hilarious
nearly all have been already probed

and the story sounds like someones future plans... not acurate information from the ground

one should ask this news outlet where and who they got this info from!!

these so called "known untouched tombs"....the term is hilarious
nearly all have been already probed


Have to agree the only possibility of an untouch tomb in Egypt is one no one knows about and there is about a 99% chance it was looted or entered in ancient times - as was Tuts.

that comment is wrong in nearly all relevant perspectives

how are you looking at it?.. whats this elusive angle

how else can i explain it to you.....dude, if we found all that gold...tons of it.... then what a lame job by the ancient looters

now... is this what your thinking, iv had a crack at trying to explain your ancient looters

what did the looters take? nothing... they just carefully unrwapped the mummy from its golden chambers, three golden coffins...tons of jewellery.... just to break his knee, steal his testicles...then wrap the body up again, rehouse the mummy in three gold coffins, back in its golden chambers and leave the treasures untouched.


is this what you think happened?

what did the looters take?...nothing..except his nards!!

The two robberies of Tuts tomb 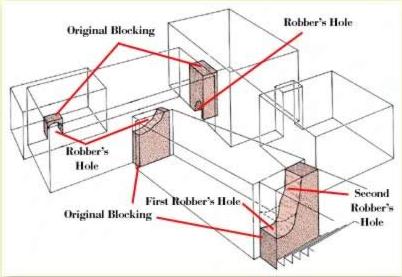 yea i got pictures too... but this isnt an art contest

and this is hilarious...


im still amused that people believe these "words"... more like doodoo with a splash of voo

yea i got pictures too... but this isnt an art contest

Translation: I have no answer to the evidence so I'm going to shout nonsense - but that doesn't really work now does it Pharaoh?

and this is hilarious...


im still amused that people believe these "words"... more like doodoo with a splash of voo

Oh my more denial, okay show your primary source for your statements...........