posted on Jul, 28 2013 @ 12:19 AM
link
At its annual symposium this month in Las Vegas, MUFON presented the best UFO footage submitted to them in 2012. Three short cell phone videos from Ball Ground, Georgia. The witness claims it was in sight for about 30 minutes before it was lost behind a cloud. According to the source article:

The MUFON science review board agreed that the object does appear to have flashing lights along its perimeter. They describe the object as circular, and say that the object in the video has yet to be identified and is currently under study.

This blurb features a few seconds of stabilized footage from the video:

On October 23, 2012 at about 4:00 PM Eastern Standard Time, I was on my front porch along with my best friend. My two children were in the driveway at the time as well.

My 8 year old daughter first saw a large black object a bit above the tree line across the street and she pointed it out to us. It was slowing moving towards my house and we got a good look at it directly above the street in front of my house. It looked to be a dull, black color with a curved, wing like shape on either side. The wings did not move though. It looked to be a solid object with no noise.

It slowly ascended NE. There were obvious lights blinking randomly on the front, sides and back throughout our observation. We watched it slowly ascend until it seemed to be close to the height of where a commercial airplane could be. There were some faint clouds very high up in the sky and eventually this object ascended into them. Before it became unnoticable, it looked like a black spec.

I have three short videos of this object that I videod with my cell phone. My daughters described this as a "spaceship" and my friend and I had never seen anything like this and felt it was a UFO.

"This was classified by MUFON as an "Unknown- Unidentified﻿ Aerial Vehicle" (UFO). It wasn't balloons guys. I'll always wonder what that strange object was and where it came from. What an amazing sighting."

Rather than embedding YouTube videos, I'm providing links to the three videos on the MUFON website, as I feel the quality is much better.


EDIT: Having trouble linking to the source article for some reason so I hope this is okay. If not, mods please remove with my humble apologies. 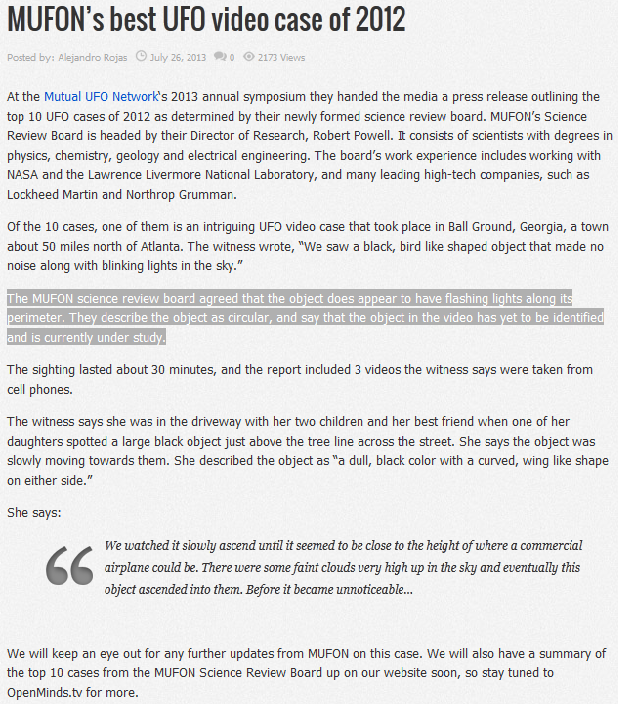 Something that looks and behaves exactly like a few stupid solar balloons linked together?

UFO "research" is doomed to failure if thats one of "the best".


I agree that most ufos can be explained but just as not every unexplained sighting is an alien craft they aren't all solar balloons, kites or chinese lanterns.

If the debunkers on the site are correct I'm going to buy stock in the companies that manufacture solar balloons and chinese lanterns.

After watching this in close up, it looks genuine to me.
That's it.
Too bad it's not better quality.

And that are no twinking lights - it's their heads popping in and out.
Remember that whenever you watch a UFO footage.

Sorry guys, balloons?
Not this time, no matter how badly you want it to be balloons.

posted on Jul, 28 2013 @ 01:34 AM
link
I find it conspicuous the video goes to great lengths to talk about the grand MUFON Science Panel of Engineers and Physicists that have supposedly scratched their heads in befuddlement over this video.

Well, if they don't know what it is, then, it MUST be Aliens(!) could, by some be inferred.

I feel like it's that episode of the Simpsons where Homer got to design the next new family car of the future: Lots of fanfare, talking, promotion and build up, followed by a whole lot of disappointment.

Has this Science Panel never seen a group of balloons or spent ANY time on youtube looking at common hoaxes and trends in people self fabricating their own soon to be put on video UFOs?
Does this so called Science Panel know anything about the Ad Revenue phenomenon on youtube that's a catalyst for many people building and releasing their very own balloon UFOs?

Someone please take UFOlogy out to the back shed and put it out of its misery if this is what it's come to.

Originally posted by Krokodil
Sorry guys, balloons?
Not this time, no matter how badly you want it to be balloons.


Take a look at the original video (not the edited version posted in the opening post) from about 1:00 onwards.

As it slowly rises in what appears to be negligable breeze (judging by the trees), it also randomly yaws, pitches and rolls.
its just a randomly slowly tumbling object, certainly not an object under any stability control.
It looks and behaves exactly the same way a bunch of solar balloons do.

Now having put forward my evidence, i'd like to see evidence for the case against.
Both you and the video'er say "not a balloon" but at no time put forward a single shred of evidence to back up that statement.

Its a lot like all those pictures you see of bugs in front of the camera, where they say "its not a bug".
Why? No reason given.


adding:
But strangely, it's somehow - not balloons?

We're not talking metallic discs anymore.
They look more organic nowadays, while still sometimes using disc shaped appearance.
Ufology is not in misery - it's better than ever before!
And hoaxers are losing the battle.
Stay optimistic!

i have heard this before, with other ufo vids...
If it wobbles - it's a hoax.
Whenever you see one fly, who says it has to be a straight line, or super stable?
If you have a craft that can hover in mid air, it sounds logical to me that it could wobble a bit.

Watch some footage of those military planes that can lift off vertically,
when they hover or descend, they are not dead motionless - they do sometimes slightly move in place,
(similar to falling leaf motion..)

Buses are controlled vehicles too,
but they can float and wobble like a jelly when driving.
Remember riding in city bus? Or driving behind it? How it can look?

So it's not hard to imagine that a hovering disc shaped craft would - wobble?

Now having put forward my evidence, i'd like to see evidence for the case against.


C'mon man, that is no evidence.
It's just your opinion of what you thinks is happening.
Same as what i said here.

Evidence is maybe, high-res zoom-in?
I guarantee you, many wouldn't accept that either.

Originally posted by Krokodil
If you have a craft that can hover in mid air, it sounds logical to me that it could wobble a bit.

Watch some footage of those military planes that can lift off vertically,
when they hover or descend, they are not dead motionless - they do sometimes slightly move in place,


You didnt bother to watch the video I mentioned before responding, did you?

So I'll repeat it again: Take a look at the original video (not the edited version posted in the opening post) from about 1:00 onwards.

Its never a good idea to talk about a video you've never seen.

The object in the video isnt wobling "a bit" (as you put it). Its a completely random state.
Specifically, from about 1:30 to 1:40 it tips upside down.

Let's see if we understand each other correctly.
I watched all posted Youtube vids,
except the one that is showing a black balloon.
Also i watched another one that i found on Youtube about the same subject.

I was not able to watch 3 links to mp4 video.
Which one are you talking about?

Your taping a strange object in the sky for 30 minutes and not one person thought to call any authority figure or even a tv station.

I also have to wonder why everyone was so calm, not one bit of excitement as to what they are seeing, why is that?

If you have a craft that can hover in mid air, it sounds logical to me that it could wobble a bit.

And if you can traverse thru the solar system I would think you have figured out how to stabilize your craft when you hover.


It's no great thing to expose videos but this to me is a parachutist floating down to earth and if I'm wrong then I still say it's floating down, it's probably man-made.

And if you can traverse thru the solar system I would think you have figured out how to stabilize your craft when you hover.


How about - because it's not a big deal?
We also don't stabilize our craft (terrestrial or airborne) to be perfectly still?

But!
We do want our vehicles to be stable when going really fast, that's another story.

And i am 100% sure that ET figured out how to be stable when it roams the universe.
It just doesn't matter so much when hovering in place.

Antigravity? I don't think they will fall out !
They don't care about these things. They know more than us.
We are discussing ET, aren't we?

Also, i noticed many times, while watching photo or video reports
when trying to figure out, what the heck is that?
it helps to watch footage upside down, or sideways..
Then you figure what you're looking at!

Because UFO's DO fly sideways AND upside down.
Simply because they can.

Sometimes we can do crazy stuff with our vehicles too, right?

Maybe ET is scratching their head and thinking -
why is this guy driving 4 wheel car on just two side-wheels?
Maybe it's a balloon and not a car?

Why is this motorcycle driving only on back wheel ?
We have to expand our minds when trying to imagine aliens behaviour,
and sometimes compare it to ours.
edit on 28-7-2013 by Krokodil because: grammatics


I might get excited if I saw something in the sky, but I would not make phone calls to local authorities, or the news. I would simply watch it and if I had something to film it with I would film it.

The other thing I would not do is run for a camera if I didn't have one on hand. I would watch whatever it was in the sky, possibly call the other half out of the house to see, but me being me, I would be scared to take my eye's off it for any length of time just in case it left.

Everyone reacts differently, and we can't put one set of rules on everyone.

I have no opinion on what is in the video. And for myself I have not seen anything in the sky that I could not identify.