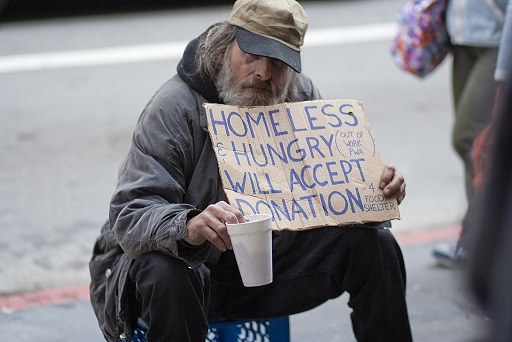 Glenn Richter arrived at a West Side synagogue on Monday to collect surplus bagels — fresh nutritious bagels — to donate to the poor.


Not sure how super dense white dough in the form of a bagel is "nutritious" but thats besides the point. I'm sure the homeless would appreciate anything.

Bloomberg is setting the new standard for government control and intervention into every aspect of our lives.

The giant government control freaks in DC must love this guy.

MysterX
+27 more
posted on Jul, 21 2013 @ 10:17 AM
link
So according to this dick head bloomberg chap, these bagels are fine in terms of salt, fat and the rest of it to SELL to the buying public...but somehow are an unknown quantity when GIVEN to poor people?

Do the public actually vote for these idiots?

Now, if I was homeless and hungry, I could give a tinkers damn about the salt or fat or fibre content in whatever I had been given to eat.

Bloomberg, once again shows what a complete idiot he is!

Perhaps the 27 Billion dollar man (his personal net worth, last I saw a total) ought to donate a few bucks out of his own nation-size checking accounts, if the homeless cannot be "harmed" with perfectly edible food stuffs he/they deem to have poor nutritional content.

BTW... How does that work for the rat meat the homeless go chow down on when the Shelter has nothing to offer from bare shelves? I suppose the alternative just "isn't their problem".
edit on 21-7-2013 by Wrabbit2000 because: (no reason given)

thaelin
+9 more
posted on Jul, 21 2013 @ 10:25 AM
link
You can really tell this piss ant of a human has never been hungry. In my life time, I have had my world jerked out from under my feet by the banking fiasco's and know what the street is. Some prefer to live there as permanant residents which is ok in my book.
Why is this idiot still in his position would be my question? Would say it is time make a citizens law that simply states if a duely elected official does not perform in the capacity meant for the people, then he or she can be FIRED just like the rest of us. This kind of person should never hold an office period...........

posted on Jul, 21 2013 @ 10:26 AM
link
So many heed the words of Big Brother blindly.......your homeless.....mow you cant eat because there isn't a LABEL.
Its not healthy to eat mystery substances......as opposed to what? Starvation? Talk about over reaching arms!

We know whats best for you, even if that means you go hungry..........im personally sick of this mentality.

Originally posted by thaelin
You can really tell this piss ant of a human has never been hungry. In my life time, I have had my world jerked out from under my feet by the banking fiasco's and know what the street is. Some prefer to live there as permanant residents which is ok in my book.
Why is this idiot still in his position would be my question? Would say it is time make a citizens law that simply states if a duely elected official does not perform in the capacity meant for the people, then he or she can be FIRED just like the rest of us. This kind of person should never hold an office period...........


Think Egypt, think Syria....now tell me what the US government is really afraid of......trying to brainwash people into thinking they are in control....they just want you to admit they are that way they can take all your rights away.

Once you give in and let them rule you......Double Facepalm.....TOO LATE


Is Bloomberg insane? I don't know if he's insane but he sure is an arrogant prick!

As the mayor of NYC is it his job to worry about who is eating bagels or how much soda a person drinks? There aren't more important issues such as the unemployment rate, crime, terrorist threats, ...etc.

Didn't he piss off the taxi drivers not long ago and nearly cause a city wide cabbie strike?

You would think new Yorkers would get sick of him and tear him limb from limb, that is what he deserves..

posted on Jul, 21 2013 @ 10:57 AM
link
reply to post by gladtobehere
What worries me the most about this guy is that he considers himself one of the elitist and that everything that comes out his mouth is gospel and right and not to be questioned...................."fanatical" is a good word for Bloomberg.

Point being if some little twerp like Bloomberg is willing to starve the homeless to make them healthier then what are the big dogs of elitism thinking up everyday to keep from being bored ?


Bear with me as there are several points I am going to make before getting to my point....

This thread makes me reflect further on a couple things I read and commented on. In one thread someone was discussing how so long as there are "creature comforts" no one will do anything about the things we are faced with today, to which I replied:


Do you notice the price of just food and the difference just a couple years have made?

I used to be able to feed two people well back in 2007-2008 for 75.00 a week.... could buy any meats within reason, fruits and salads and vegetables as well as the basic bathroom supplies and house cleaners for that 75.00. The money went far and you ate good for that.

Now if all you have is 75.00 to spend you are not getting any fruit that is not bananas because any other kind of fruit is too expensive, you are eating casseroles because they stretch (no more roast!) salad is a thing of the past as you cant fit it into the budget and vegetables are only the cheapest you can find.


This is what we are facing, and it is only 5 years later. Havent you noticed this in your own budget? At this rate of grocery store inflation, soon many will be unable to eat, and wont qualify for any financial assistance because they make too much money...... what happens then?

creature comforts will soon be a thing of the past for many!


Then I read a thread about Miami making it easier to incarcerate the homeless for fulfilling basic needs with no home... www.abovetopsecret.com...

And now this thread and it makes you think.... are they considering culling the homeless population and making people used to the idea and complacent about it? Later to cull the "unproductive" poor and make the rest so busy trying to survive that they don't have time to question the powers that be?

We seem headed that way... and fast

Important to note the Roman's "bread and circus"..... our circus is the internet... and in my area they just started giving away basic internet... brought to you by google fiber.
edit on 21-7-2013 by OpinionatedB because: (no reason given)

Keep up this statolatry and you will soon find yourself eating


I will try to stop the mind reading....its dark and scarey in there!! ROFL

posted on Jul, 21 2013 @ 11:17 AM
link
Those bagels may come in handy considering many Americans are one catastrophe away from being homeless themselves.

We live now in a world where wrong has become right and right has become wrong!

If the homeless and destitute won't be fed in NYC's shelters, then where do you think they're going to look for their next meal?

Starting to feel like NAZI Germany to me......Democracy be damned........Make way for the Fascist dictatorship...DOH!