posted on Jul, 3 2013 @ 07:16 AM
link
At 11 o’clock on Saturday, the Women came into the Stockholm mosque in Södermalm, threw their clothes away, and, with clenched fists in the air, they shouted in English:… “No to Sharia! No to oppression! Free women! 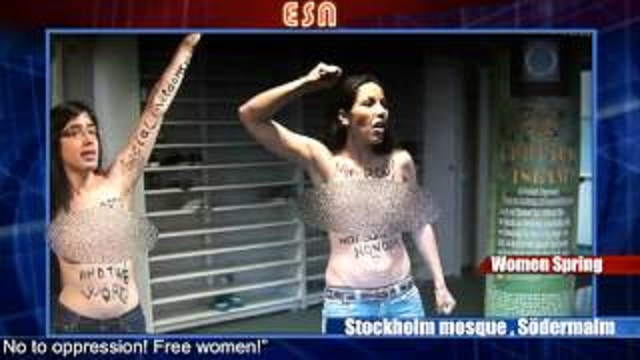 Don't know how credible the source material is.

All I can say is go for it ladies its just so refreshing (Im sure it would be since Sweden's quite cold) to see Muslim Sharia law being challenged in such a manner! LoL

posted on Jul, 3 2013 @ 07:19 AM
link
But.... they are not female Muslims at all. They are from the same idiotic Femen group and have been busy of late pulling stunts like this in churches as well. Interesting they are yet to hit a Synagogue!

posted on Jul, 3 2013 @ 07:22 AM
link
Love these ladies, they have it all worked out and have a good message. Femen has always been an interesting movement, something I believe the Russian Pussy Riot have been involved with for many years too.

I like defiant acts of protest like this, they work to get publicity to a cause using peaceful means.

Originally posted by andy06shake
Don't know how credible the information is ...

Yeah... Muslim women simply would not do this. This info is not credible. These were likely American women with nothing better to do. :shk:

Originally posted by Britguy
But.... they are not female Muslims at all. They are from the same idiotic Femen group and have been busy of late pulling stunts like this in churches as well. Interesting they are yet to hit a Synagogue!

So it's "idiotic" because you don't appreciate their message?

I'm a supporter of all basic Human rights, and I support freedom of religion and have defended the Islamic faith against knuckle-draggers from the UK EDL on here before, but there are aspects of Islam that denigrate women, traditionalists are especially hateful and controlling and want to treat women as possessions, slaves.

Any peaceful fight against that is a noble one in my opinion.

posted on Jul, 3 2013 @ 07:27 AM
link
I think it's worth clarifying that these are not Muslim women, only the BS blog presenting that story is claiming so. The video is clear that these are Swedish women from the FEMEN group protesting against the sexist practices within the Islamic faith.

It's a good video, but it's also good for showing what trash and propaganda BeforeItsNews really is too, and why it shouldn't be trusted.


If you ask me, I think more protesting of this type should be going on in these Mosques which call for Sharia!!

Its not just Women who should be protesting either.... we don't want to be taken back.... we need to move forward.

posted on Jul, 3 2013 @ 07:38 AM
link
They were sent from abroad and were sent very secretly according to Swedish newspapers.The second they ran in they thought that people would "kill them" according to their own words. That's the stupidest thing I've ever heard, the mosque is a place for peace, why would they assume that it's a place where you kill people?

What they did is very wrong, they're disturbing the peace among people and ruining the relationship between humans in society. I wouldn't let it go for a dime, I would take charge against them and hopefully prosecute them.
Being free is not getting naked and running through a mosque. They're delusional and have no idé what democracy or freedom is. I hope they come to a sense and stop these mad idés, one day they'll get their selves beaten because of what they do. No one encourages disunity and violence more than these women.

They have the wrong image of Islam, Islam has more women rights than any other society, religion or culture in this world. It's the fact that they're so uneducated about Islam that makes them think that women are oppressed in Islam and have no rights. Do you see Muslim woman running around and screaming for help because they are oppressed like any normal oppressed human would do? NO! they're more satisfied than those who are so called "free" and running around naked. Makes me sick to the stomach when someone tells me Muslims women are oppressed.


Originally posted by Rocker2013
So it's "idiotic" because you don't appreciate their message?

Oh, I appreciate their message, just not their tactics. It's just totally disrespectful and will NOT do any good to go into a place of worship in a culture where the female body is always covered and bare said female body. It's just going to cement any hatred and fear that one culture has for the other.

When REAL Muslim women are protesting, then I support them. But otherwise, it's just one culture forcing their view on another.

posted on Jul, 3 2013 @ 07:48 AM
link
Muslim women will never protest against Islam, they know what Islam provides for them and they're fully happy. I don't know why people think that Muslim women are oppressed, can you at least give me a reason? Don't give me cultural reasons, give me something that Islam says a woman must do. I've asked my mother and she wouldn't give a thousand worlds for Islam and Allah.
edit on 3-7-2013 by Misbah because: (no reason given)

posted on Jul, 3 2013 @ 07:52 AM
link
'bout time - how long can half the country (islam) be kept in slavery - the men don't have any trouble wearing shorts and sandals. - WTG !!!
hopefully women every where will speak out against sharia.

Originally posted by Benevolent Heretic
reply to post by Rocker2013


Originally posted by Rocker2013
So it's "idiotic" because you don't appreciate their message?

Oh, I appreciate their message, just not their tactics. It's just totally disrespectful and will NOT do any good to go into a place of worship in a culture where the female body is always covered and bare said female body. It's just going to cement any hatred and fear that one culture has for the other.

When REAL Muslim women are protesting, then I support them. But otherwise, it's just one culture forcing their view on another.


I can swing with that. Star for a well presented point.

posted on Jul, 3 2013 @ 07:59 AM
link
Extremes are so illogical. They couldn't have just worn normal clothes into the mosque and started a respectful debate with the cleric or whoever? Let's all get naked! That'll show 'em!

At least those muslims are smart enough to understand that the half-naked female form makes a penis rise. Unlike these insane feminists who put tape over thier nipples and paint "STILL not asking for it!" on their body. I understand it's more for control and religious reasons than protecting the woman, but still, they understand being half-naked will result in sexual thoughts from others.

Anyways, I have to stop myself before I rant about feminazism. Fighting one extreme with another is ignorance and solves nothing.
edit on 3-7-2013 by BanTv because: because femanon

posted on Jul, 3 2013 @ 08:06 AM
link
Someone blurred out their boob area.
I am not certain, with this photographic evidence, that they were completely bare-breasted. There may have been pasties involved.


See if you watch the youtube video, you will see that they actually are bare breasted. About 43-44 seconds in they don't blur the image fast enough. LoL
edit on 3-7-2013 by andy06shake because: (no reason given)


Pasties, I love pasties, homemade are better than the crap they sell in pastie shops around here. I wonder if the original breast pasties were thought of by a woman using a pastie crusts to cover up. I can see the french taking a Scandinavian or Cornish food and doing that.

Sorry for getting off topic OP.

They have become those they are protesting

Originally posted by borntowatch
Its disrespectful,what ever way you look at it

They have become those they are protesting

And their breasts are their selling feature