If ats deducted all the above, then how many users’ are actually on this site.

Just denying ignorance that’s it!
edit on 2-7-2013 by IamJewish because: (no reason given)

IamJewish
1. If ats deducted all the accounts that were banned in the last 14years.


2. All the accounts that were banned by users, but made another account, and banned again, and again and again.


3. All the accounts in 14 years that users just never came back.


No. Makes no sense.


4. All the double and triple accounts made by users so they can star them selves.


5. All the posters in the last 14 years whose pass words were changed.

posted on Jul, 2 2013 @ 03:34 PM
link
reply to post by SkepticOverlord
So mods or owners have never ever changed some ones password?


There were a small number of extreme cases where we didn't want to outright ban a member while staff discussed the issue. No more than 10 though.

I'm aware some carpet-pissing juvenile idiots who love to case aspersions and fabricate lies about us believe it to be more than that, but your passwords do expire here... and some have assumed nefarious intent from an expired password.

When I said open I meant active me and my bad choices of words sorry about that
edit on 2-7-2013 by Brotherman because: (no reason given)


If someone makes an account, just to view the site the way members view it (instead of guests), and never posts... that's fine.

I've never understood the bizarre fixation carpet pissers have had on our member stats.


I to be honest I have never looked myself I was just curious as to the answer you provided on that one, everything else you said I got, to be honest members in your tier like Springer and others have always been awesome with me. Thank you for your clarification though

for the record I'm not a carpet pisser
edit on 2-7-2013 by Brotherman because: mobile device posting same parts of sentences twice

Brotherman
for the record I'm not a carpet pisser

For those who are... 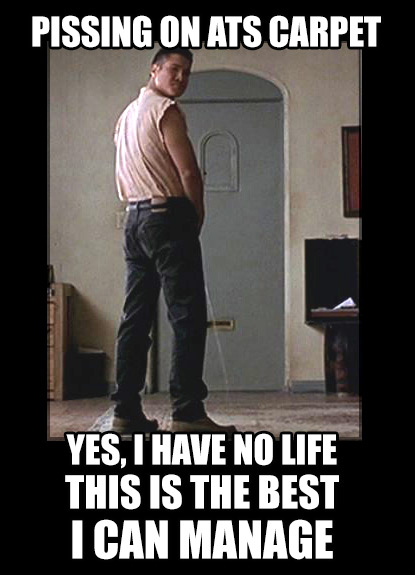 My password expired. I guess it took me a couple of years. I was in Austin, TX when it happened, about 18 months ago. I had a mods contact info external from this site, and took advantage of an easy fix. Literally, an easy fix. Couple of hours turnaround time, and look.....I'm still here. Being a crusty old fart.

posted on Jul, 2 2013 @ 08:33 PM
link
This may or may not have any significance, but about 10,000 - 11,000 members have visited in the last month. I would suspect that may be a reasonable count for the number of "active" members, but there are probably several factors I haven't considered.

posted on Jul, 2 2013 @ 08:34 PM
link
Out of curiosity....will ATS replace the pissed stained carpet with tile or something when the upgrade happens?

So we finally know what the ultimate question is.

Originally posted by Springer
reply to post by bigfatfurrytexan


But that rug really tied the site together, you know?


'Dude just wanted his carpet back

you make a mean caucasian Jackie ...

posted on Jul, 3 2013 @ 04:12 PM
link
Never have i seen such a bunch of off-topic posts, you boys should know better. And all this talk about weeing on carpets, its upsetting my delicate nature, i need to get my smelling salts.

On topic, i made a thread last year, just asking where do people go? why do they leave? What reasons are there. Oh god there not nudge nudge wink wink "404" d are they? i better shut up.


As is the case with all online forums, sometimes they just stop coming. Fact of life.


'Dude just wanted his carpet back

you make a mean caucasian Jackie ...

Impressive that you picked that up.