What will Cameron say when Mandela is dead

posted on Jun, 25 2013 @ 03:28 PM
link
Most of us in the UK are quite familiar with Mr Camerons heart felt speaches, when there is a tragedy. I think that sometime very soon the racist terrorist who was eventually given a nobel prize will be dead.
As you can tell I am no fan of Mandela but at least I am honest about it, but I urge you to watch Mr Cameron as he lies about how he was an inspiration and blah blah blah
In 1985 Dave was a top member of the Federation of Conservative Students, and he and his friends produced the poster below 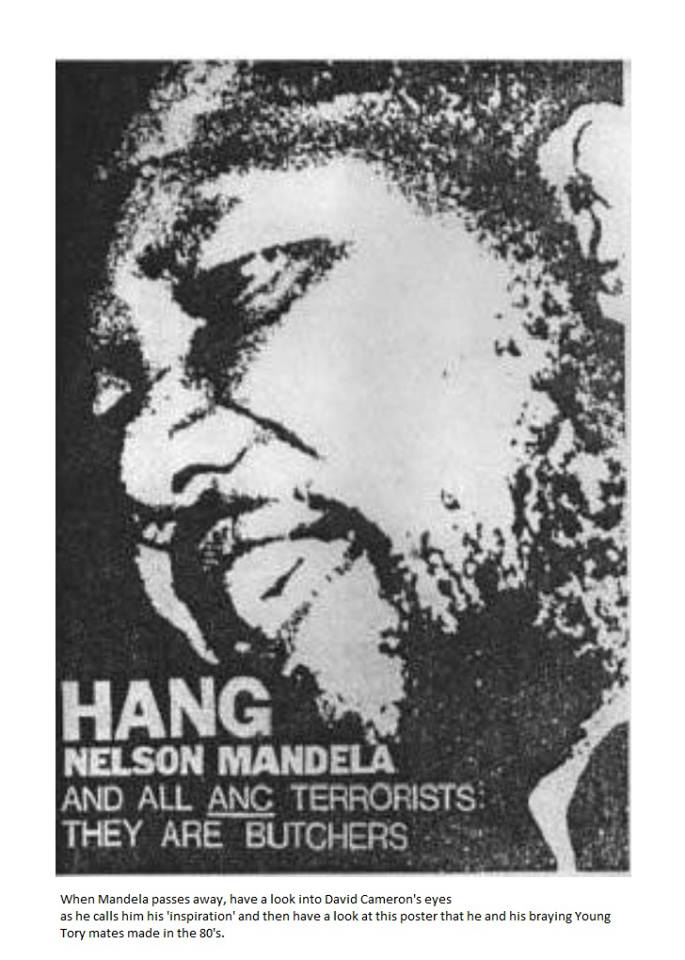 Further more in 1989 he worked in the Tory Policy Unit at Central Office,and went on an anti sanctions fact finding mission to South Africa with a pro-apartheid lobby firm that was sponsord by Botha. Please remember this and look into his eyes when he tells us all about the great man.
edit on 25-6-2013 by dam00 because: (no reason given)

posted on Jun, 25 2013 @ 03:43 PM
link
One man's freedom fighter is another's terrorist. While he jabbed Mandela in the past, Mandela won. So... He get's remembered differently.

Similar to the question of, is Snowden a hero or traitor?

If we only acknowledge the bad... Everyone will be evil.

posted on Jun, 25 2013 @ 04:55 PM
link
Cameron is of the anti-Apartheid generation and he’ll react with due reverence to a man who fought against Apartheid. Whatever the rights and wrongs of the ANC and Mandela, they were fighting a pretty crap political system.

One thing we have to be thankful for was the peaceful collapse of Apartheid and the so called “Truth and Reconciliation” commission which resulted in the washing of the wounds of decades of abuse and hatred which went both ways.

Cameron will probably be sincere. The death of Mandela will be the end of a man who acted as the focus of resistance to a political system which had no place.

posted on Jun, 25 2013 @ 06:18 PM
link
We'll see, but one can only expect polite diplomacy.
The US only removed the ANC from its terrorist list in 2008, and I bet that when Mandela dies they're not going to mention that either.

Thatcher called the ANC "terrorists" in the 1980s, yet when she met Mandela after his release they had such a long meeting that the people outside humorously started shouting "Free Mandela"!

When Thatcher died the ANC did send condolences, although individual pro-ANC ideologues looked back more critically in the press.
www.guardian.co.uk...

Incidentally, the above article also mentions that Cameron met Mandela in 2006, and he had then already stated that his previous attitudes were wrong:

In 2006, David Cameron met Mandela and admitted the Conservatives had been wrong.

But many people are no longer ideologically the same as during the Cold War.
The former apartheid minister, Pik Botha, for example, is now a member of the ANC.
Conversely, some former liberals and ANC supporters are now fierce critics, or have quietly left the country.

Actually the Truth and Reconciliation Commission is widely regarded as problematic in SA.
It smelt of a shady deal that focused culpability on the conscripted and mind-controlled foot-soldiers of apartheid, while the grand leaders got away free, without any real confessions.
They all claimed to know nothing.
One can well suspect that a deal was made behind the scenes for indemnity, possibly already during the late 1980s.

PW Botha gave the whole show an unapologetic finger, although he got a state funeral.

Similarly, ANC crimes got collective amnesty, and they never really took responsibility for their local struggle based on necklacing, intimidation, disrupting the available education of youngsters, war with the rival black political group Inkatha, and gulags like Quatro (where they executed or kept their own soldiers for minor infractions for years, always in much worse conditions than Robben Island, to say the least).

None of the international companies that kept apartheid running was held responsible.
There is such a movement, notably by the Khulumani Support Group, which received no backing from Mbeki when the TRC report was brought to Parliament in 2003.
www.thoughtleader.co.za...

Nevertheless, despite a lot of fabricated and propagandist history, Mandela himself changed during his imprisonment.
Some would like to see him as an entity apart from the ANC, or at least what it has become.
His presidency was probably the best ever.
I felt kind of sorry for him, and the way he became property of the ANC and his apparently gold-digging family.
I felt sorry that his son Makgatho Mandela died of AIDS in 2005, and I admired the fact that he admitted this when his successor, Thabo Mbeki pushed AIDS denialism.
en.wikipedia.org...
His own party was not beyond his criticism after his presidency, and to me that really took courage, because they don't take very kindly to criticism.

I'm also he glad he found a loving marriage with Graca Machel at 80, without the eventually thuggish image of Winnie haunting him.

I won't grieve too much when the inevitable happens.
I think the Mandela story has been written, and already had every drop of sentimentalism squeezed from it.
But I won't pop the champagne either.
As far as Presidents go, he wasn't perfect, but he was pretty darn good.
So that's the magic period I'll remember: 1994-1999.
edit on 25-6-2013 by halfoldman because: (no reason given)

We won't know what he'll say to his chums after a few drinks ...

Unfortunately we don't get to spy on the politicians like they can spy on everyone else.
But it would indeed be interesting.
edit on 25-6-2013 by halfoldman because: (no reason given)

Originally posted by woogleuk
I'm sure his spin team will have a speech ready for him to show how much they (the Tories) care.


Nice find and thanks for sharing