An American City Govt. Seeks the Cruel Power to Banish People from the Streets in... Vermont?

An American City Govt. Seeks the Cruel Power to Banish People from the Streets in... Vermont?


The story from Vermont, of all places, is breathtakingly simple: the elected city council, in a bi-partisan vote, has decided to keep its law-making process secret, rather than openly address the question of whether a draconian no-trespass law it passed last winter is patently unconstitutional.

That's right, rather than explain why the law it passed is constitutional, the Burlington City Council is hiding behind lawyer-client privilege as if it - the council - were some private corporation rather than a democratically-elected local government.

The ordinance in question, the "Church Street Marketplace District Trespass Authority," passed the City Council unanimously in February 2013. The council vote followed seven public hearings at which some concerns were raised and addressed, but no controversy arose. The ordinance allows the immediate and arbitrary banishment of people from public streets with no due process of law and no effective appeal process.

posted on Jun, 18 2013 @ 09:48 PM
link
I do not see how this is Constitutional. There are several problems here not including the fact that sunshine laws seem to be broken by the town council. I don't know Vermont state law but usually one can get a FOIA request for documents even if they are from a government contractor in the line of the work/contract with the government.

But to banish people from the street and then claim a "secret" privilege to the basis of that claim. I wonder what will happen when the state steps in?

www.alternet.org
(visit the link for the full news article)
edit on 18-6-2013 by fnpmitchreturns because: sp


The current law imposes “time-out” penalties — removal from the Marketplace district — for repeat violations of existing prohibitions: disorderly conduct, unlawful mischief and the possession of regulated drugs and open containers of alcohol.

Banishment ranges from a day (first offense) up to one year (for third and subsequent offenses).

Similar guidelines have been in place since 2010 for City Hall Park, and more recently, for Fletcher Free Library.

In February, councilors unanimously approved the ordinance for offenses in the marketplace — following nine public hearings, and after receiving assurance from the City Attorney’s Office that the guidelines did not subvert constitutional protections. That vetting of the ordinance was placed off-limits to public scrutiny with the council’s invocation of attorney-client privilege.

This only applies to people violating a law and facing arrest. Rather than clog the court systems, the police give them the banishment order. They've already been doing it for three years in various parts of the town. I'm sure the officers could easily say "Do you want to be arrested, or will you agree to stay away from here for a month?" The options, as presented, would most probably be met with "Ok, I'm going, don't lock me up." Basically a win-win.

As far as attorney / client privelege? That's solidly entrenched in our system and isn't going away.

It may be unconstitutional, but the Council's lawyer didn't think so. Apparently it has not been challenged in the last three years.

Nothing here, and no "cruel" power.

posted on Jun, 18 2013 @ 10:14 PM
link
reply to post by fnpmitchreturns
Although it is not stated in the article it is probably safe to assume they passed the ordinance to either rid themselves of panhandlers or homeless people, to get a handle on street crime (thugs or drugs), to stop kids from raising money for sports, scouts, etc. at intersections and on sidewalks or to stop people from assembling to protest or picket. While I don't agree with such ordinances there was no need to make it a big secret as many, many cities around the country have passed similar ordinances- unless they know it's not wanted by the public and are afraid of the backlash. If that is the case they should not have considered it to begin with and should probably be quaking in fear of recall elections. You reap what you sow.

posted on Jun, 18 2013 @ 10:18 PM
link
Basically the Sunshine laws have a very few exclusions for nonpublic meetings. The subject has to be lawyer-client discussion, a proposed arrangement affecting development (closed meetings with potential developers) or a confidential employment matter here in Texas.

On the other hand, there's little recourse or remedy if the town council chooses to act secretively in difiance of the law - unless you've got a bunch of money to take them to court. Nobody in government seems to have any or exercise any clout in this arena.

posted on Jun, 18 2013 @ 10:18 PM
link
reply to post by charles1952
Just saw your post charles, you must have been posting while I was still typing. The additional information you have brought to the thread paints a better picture of the situation as the article linked in the OP wasn't specific. It certainly makes more sense now, and I'm sure many would rather be temporarily banned than carry an arrest record.

Thank you very much. Alternet is interesting, but it usually pays to look more deeply into their reporting. I'm not saying that they're sensationalist with an agenda, wait, yes I am.

It's fun to get worked up over the many "disasters" discussed here, but I remember a Captain giving me some advice when I was just starting out. "Nothing is ever as good, or as bad, as first reported."

posted on Jun, 19 2013 @ 12:08 AM
link
Seems like Vermonts citizens are being slapped with an ASBO (Anti Social Behaviour Order) if you step out of line.. Which could be for near enough anything and not just what was stated in the OP. nice find !

posted on Jun, 19 2013 @ 12:48 AM
link
People willing to give up their rights so they dont get in thrown in the slammer for something they did-sad.

What happened to the motto "If you cant do the time-dont do the crime"?

Closed door meetings? Not right unless national security is a factor.

Those public streets are paid for by the people, who is the local govt to say people cant be wherever they want on the streets they paid for whenever they want?
If they are caught breaking the law. then that is on them and they should get the jail time or pay the ticket. in other words- MAN UP.

I would rather pay my way and be free= rather than pay my way to be controlled. 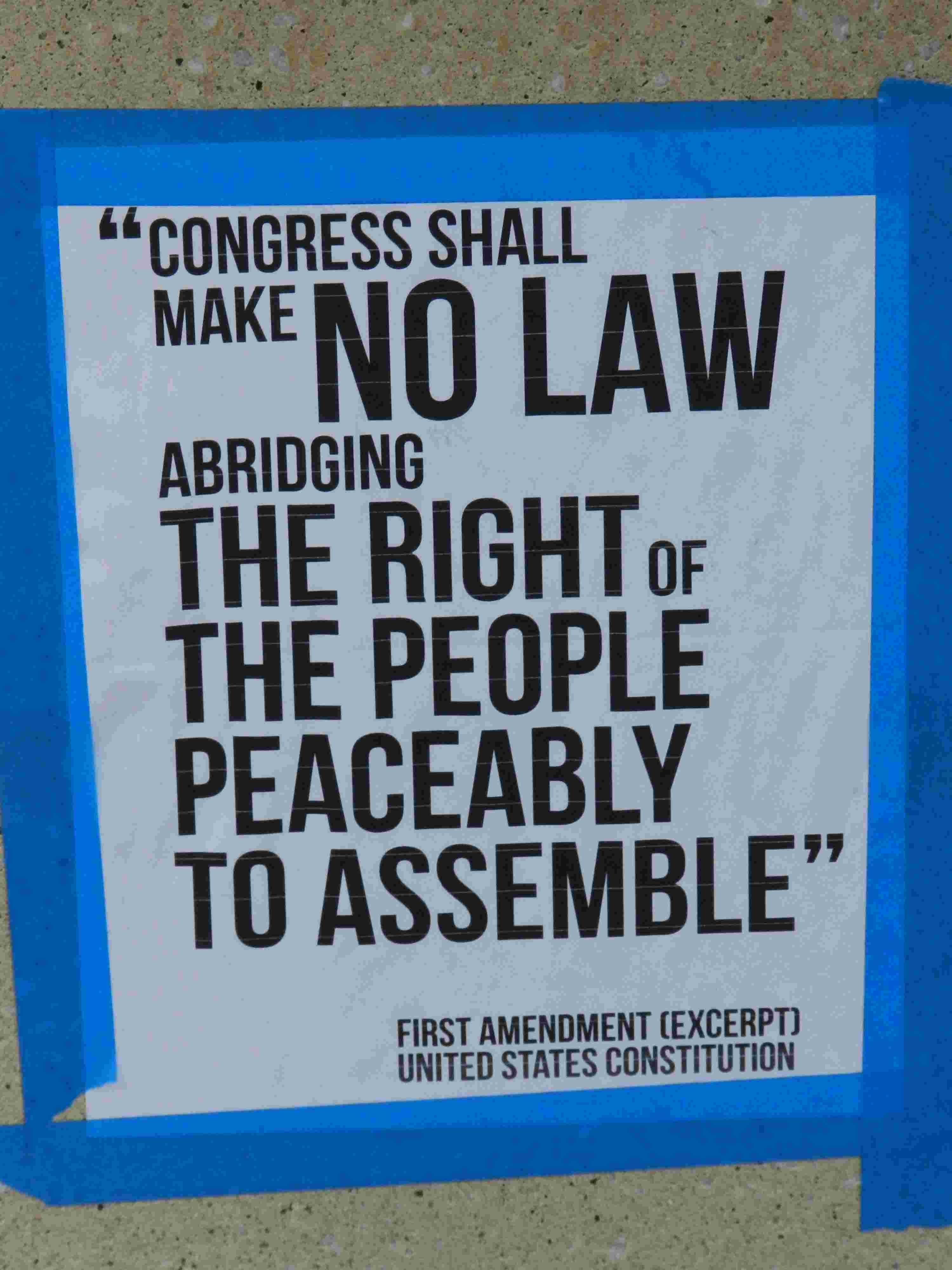 
As for why this is, it's about protest in my opinion. This is why they want to keep it secret, just like many other laws passed for supposed "security" measures or "public safety" in recent years.

The problem these people face is that they are now in a catch-22. They often cannot afford the policing for protest, but they also cannot just allow people to protest without controls in place to restrict where they go and what they do. So, the best option is to prevent the protest before it really starts.

They want to keep these laws secret because they now view the public as the enemy, this allows them create such laws with almost no constraint or oversight.

I am of the firm opinion that our western governments, whether it's national or local leadership, are fearful of the people having seen the protests by Occupy, what happened in Iceland, what's happening all over the world, and they know that it's mathematically impossible to stop the public when they reach a certain number.

Half a million cops with batons, riot shields and tear gas cannot stop three million people in a protest, and they know it. They also know that this possibility is becoming more and more likely as wages drop, prices rise, standard of living collapses, services fail... the same thing is happening at the national level as the local level, and it's happening in all our so-called democratic nations.

Whether it's mass monitoring of the people, the push for internet controls, the gagging of national press or the implementation of "secret courts" and "closed sessions", this is all in an effort to identify the people as a potential enemy and to stop them from ever being able to organize and protests against the local/national government.

I think you might find, with a little digging, that there are similar things being passed in various states and countries under all kinds of different excuses. The one thing all these things have in common is that they claim to be about public safety, when there seems to be no other reason or use for such measures than to stifle or stop public protest.

Originally posted by EViLKoNCEPTz
reply to post by Spider879


You cannot claim that all are guilty of these things, or potentially guilty, and end all public protest. If you think that excuse is a valid one for halting the rights given by the First Amendment then you should not be calling yourself an American, in my humble opinion.


The law being discussed in this thread is for individuals who do those things. They get temporarily banned (no trespass) from a public street. It has nothing to do with groups protesting. Did you not read the law? It is aimed at unruly individuals who don't want to follow the law instead of tying up the courts with petty crimes they get a no trespass warning and can't come back for 1 month up to a year.

ETA: since you want to take personal digs based on your lack of reading comprehension, it's my humble opinion you have literacy issues. You may want to go retake basic English and learn to comprehend what you're reading before replying.
edit on 6/19/2013 by EViLKoNCEPTz because: (no reason given)

Originally posted by EViLKoNCEPTz
reply to post by Spider879


Ever heard of mission creep??..look what happened as an out growth of the "Patriot Act "


There are a lot of city ordinances against trespassing after the commission of a minor crime like public intoxication, disorderly conduct, drug use, open containers, etc. They are most common in places where large groups tend to be such as shopping districts. They're in place for public safety and to give the trouble maker a break. First time you're asked not to come back for xxx amount of time, if you don't heed the warning you get a hefty fine or jail time. It keeps small things like drinking a little too much and getting rowdy from clogging up the court system and getting someone a record by giving them a chance to prove it was a one off incident.