posted on Jun, 17 2013 @ 05:03 PM
link
It seems we are in an age of discovery with this lattest find of a tomb with a domed ceiling and elaborate Murals discovered southwest of Beijing .
The tomb was for a military commander and his wife and dates back nearly 1,500 years and was originally discovered in 2008 but it seems it has now been unvieled in all its glory after an attempted theft of the murals.


The tomb was uncovered in a salvage excavation in 2008. Yan said that the tomb had been robbed three times before he got to it, and most of the grave goods, including the bodies, were gone. In fact, the thieves were making preparations to steal the murals, too, but the authorities arrived just in time to stop the theft

When authorities discovered the tomb, a team of scholars from several Chinese antiquities institutions began excavating the site and conserving the murals. Based on these murals and the tomb design, along with a few remaining grave goods, the scientists determined the tomb dates back nearly 1,500 years, to the Northern Q

Four men blow into long horns at the entranceway into a 1,500-year-old tomb chamber, located on the south wall. The mural tomb likely held a military commander and his wife in what is now Shuozhou City, China. 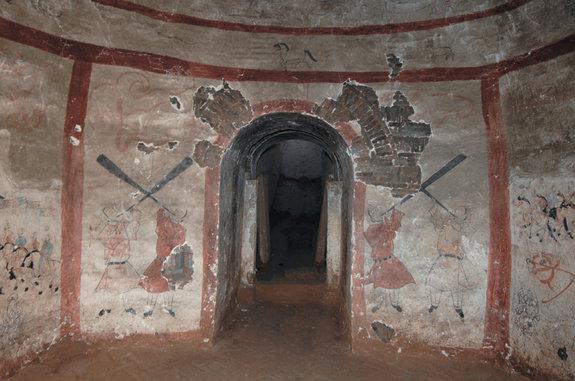 A close-up of four of the female attendants under a parasol. Notice the detail of their "flying bird" hairstyles. 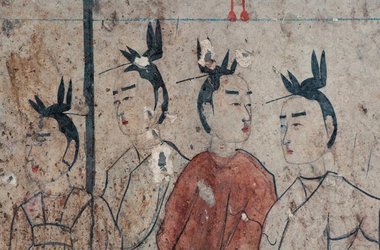 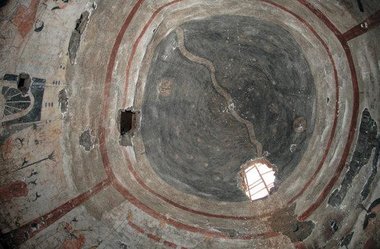 Archaeologists believe the couple buried at the site consisted of a military commander, in charge of the Shuozhou City area, and his wife. This makes sense given the date of the tomb. Historians know that at the time this couple lived, three rival dynasties battled for control of China.
The buried commander served the Northern Qi, a short-lived dynasty that lasted between A.D. 550 and 577, when it was conquered by another group of rulers known as the "Northern Zhou." Needless to say, military leaders were in high demand at this time, and military experience was the key to obtaining power.
science.nbcnews.com...

posted on Jun, 17 2013 @ 05:47 PM
link
Very very interesting. It looks like an Egyptian tomb. The Chinese mummified their dead too. I think the world has always been a small place....HELLOOOOOOOOO America - you were never a new world - just a blip in the memory.


I love this kind of stuff! I wish we knew more about our history, as a whole. There's so many things we could learn and it makes me wonder. Could you imagine knowing everything the ancients knew?

Originally posted by christina-66
Very very interesting. It looks like an Egyptian tomb. The Chinese mummified their dead too. I think the world has always been a small place....HELLOOOOOOOOO America - you were never a new world - just a blip in the memory.

America, both south and north, has a lot of history and cool stuff that you may be interested in reading about.

Here are more pictures and descriptions at this link:

posted on Jun, 18 2013 @ 06:15 AM
link
Very very interesting. It looks like an Egyptian tomb. The Chinese mummified their dead too. I think the world has always been a small place....HELLOOOOOOOOO America - you were never a new world - just a blip in the memory.

On the contrary,the Egyptians tombs were more elaborate and the art was far more exquisite then what is seen here.no real comparison.


Ummm - multi chambered, smooth walled, burial tomb - with depictions of the life and times on the walls? You don't think that's in any way similar to Egyptian tombs? Not even a teeny weeny bit?