posted on Jun, 16 2013 @ 10:54 PM
link
Just spotted this article on the YVO's site. In it they finally determine that the big Yellowstone Lake earthquake swarm of 2008-2009 was likely due to magma injection.

Another example of migrating Yellowstone swarm activity occurred in 2008-2009 in northern Yellowstone Lake. This energetic swarm exhibited an extraordinarily high migration rate of ~1 km/day and is interpreted to be associated with magma injection along a pre-existing vertical fracture at a volumetric rate of up to 5 m3/s. This process produced a succession of migrating swarm fronts (Figure 3). Very few repeating earthquakes were identified, and the authors concluded that the sequence was initiated by volcanic pressurization that caused the generation of new fractures.

Compare this to the big Madison Plateau swarm of 2010, which they determined to be caused by hydrothermal fluids.

Interestingly, I was here and present for both of those swarms, seeing the first one back when I was running the program GEE, and the 2010 swarm with my newer rig. In fact, one of my contacts actually asked me if I'd be interested in helping to count the quakes in that 2010 swarm, as a volunteer project for the USGS. I declined, not having the time to deal with it.

So what were the characteristic differences between those two swarms? If I can recall correctly, the biggest difference it seems to me was overall magnitude. During the 2008-2009 YS Lake swam, the magnitudes seemed to be bigger on average than the 2010 Madison Plateau swarm.

In this article they also point out that:

Two major swarm sequences at the western edge of the caldera are interpreted as magmatic fluid induced: the 1985 swarm, and the relatively recent 2010 swarm. Both contained numerous repeating earthquakes. Also in both cases, modeling of fluid injection on vertical volcanic dikes was used to show that expansion of the swarm fronts was a result of flow along pre-existing fractures of hot pressurized waters (hydrothermal fluid) for the 2010 swarm, and of magmatic fluids for the 1985 swarm.

So in at least two cases, 1985 and 2008-2009, both swarms were indeed caused by magmatic processes. I just find it interesting in light of the fact that Jake Lowenstern (YVO Director) had said in one video that Yellowstone was "pretty much finished." It would be great if that was the case- then we'd have nothing to worry about. But considering later research which revealed that any one of these monsters could reignite at any time, in a much shorter time period that anyone previously thought- because such hot deep magma could melt rock above it much faster than previously thought- I don't know what to believe about Yellowstone any more. But I know this much- any supervolcano which is experiencing fresh magmatic fluid injections is far from "dead" in my mind- and could blindside us at any moment.


It's too bad you didn't have time to count the 2010 quakes. Yellowstone is far from finished. It's got lava underneath it so how can anyone responsibly say its dead as this guy did.

So what they're saying is new fractures were created which means instead of filling up the increasing lava is just expanding outward? I'm just trying to get a visual of this. If so that doesn't mean it wouldn't get to a point of injecting into existing fractures, causing too much pressure.


Pretty sure they said along pre-existing fractures, not new fractures:

Also in both cases, modeling of fluid injection on vertical volcanic dikes was used to show that expansion of the swarm fronts was a result of flow along pre-existing fractures of hot pressurized waters (hydrothermal fluid) for the 2010 swarm, and of magmatic fluids for the 1985 swarm.

lol, also, of course I am monitoring YS as we speak. And the second I posted this, got a signal from a small quake near the lake. Karma, I tell yas. We're talking about the beast, and she answered, immediately.
edit on Sun Jun 16th 2013 by TrueAmerican because: (no reason given)


Actually, I see where you're getting that from:

Very few repeating earthquakes were identified, and the authors concluded that the sequence was initiated by volcanic pressurization that caused the generation of new fractures.

This article appears to contradict itself somewhat, both with new and pre-existing fractures, as well as the actual cause of the 2010 Madison Plateau swarm- and it's confusing.


Maybe its so much lava coming upward its taken the existing fractures and expanded them. I'm glad you can see the activity. They rarely post them on earthquake 3D or USGS and their site is always a couple days behind. I live close to yellowstone so like to keep an eye on it. It seems to me we had a small swarm in there over April and May. I also like to keep an eye on long valley and other systems. It's easy to forget that the western US is pretty much sitting on top of two of the 7 (?) super volcanoes of the world.


Yes, you are correct with the UoU being a couple days behind listing YS quakes. That's why to really stay on top of things I monitor it directly. Monitoring has been turned over now I believe to the NEIC, which does show them pretty quick now on the main USGS earthquakes page, if you select the right options, that is.

You have to select one of the "All Magnitudes" options to see them, under the options menu. But YS has been quiet here in the last week or two, so there's really nothing to see at the moment.


interesting article. Wondering why it took them so long?

Well you were just registering here, right smack in the middle of that 2008-2009 lake swarm. You remember it? A lot of us were speculating about whether it was magmatic or hydrothermally induced. I remember a bunch of them showing up on the main USGS list at the time, being over 2.5 in magnitude.

Apparently there are slight source mechanism differences between water caused quakes and magmatic caused quakes, and it takes them a long time through research and study to determine which it is. But next time, I will lean towards magmatic if the magnitudes are generally higher. 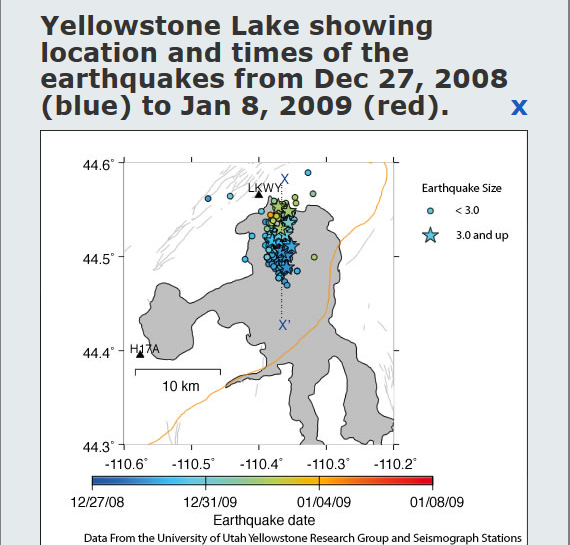 It appears the magma worked its way north, right into the known bulge under the northern part of the lake.

And correction: west, looks like you registered here a mere two days after the conclusion of that swarm, my bad.
edit on Mon Jun 17th 2013 by TrueAmerican because: (no reason given)


I remember! Actually, my memory is horrible but I believe it was that swarm that compelled me to register here at ATS. I was a lurker for awhile (that was back in the day when you could post as anonymous ) It was the earthquake stuff that pulled me in.

I always thought it was magmatic. The last one, not so sure. Like you said, the mags were smaller. Still though, perhaps as it gets closer to the surface and the fractures have already occurred, the quakes aren't as big? More of a settling affect? Just a guess. Kinda like turning the pot down from a hard boil to a simmer.

Jake: Yellowstone is pretty much finished...

Reporter: So that new island in the lake is OK...I was worried there for a second...wheeew

OP if YS goes, everyone has a problem not just the people in the US. Not that anyone can do anything about it, it still is good to know whats going on. I suspect that it could effect the volcano's over here in Asia as well. Seems to be quite a bit of activity with volcano's lately.
edit on 6/17/2013 by pstrron because: small correction