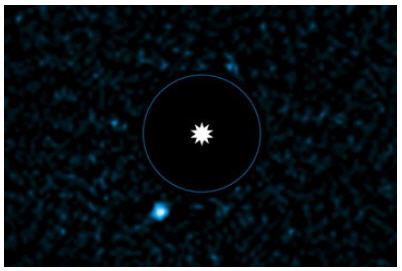 
Never stated there was any, just posted the original article title as written. An alien planet is any planet that is not the Earth.


As I stated clearly, not MY title. I simply posted the title of the article in which the story appears. If you have an issue with the title, then complain to the editor of space.com about it.

Gaseous beings are plausible....or perhaps floaters and hunters (cue the Cosmos music in the background).
edit on 3-6-2013 by Krakatoa because: Hit enter too soon........

Thanks for posting this thread. I'm glad I decided to do one more sweep of ATS before closing the computer for awhile. What a nice sight to behold, and this pic brings home the reality of planets well outside of our solar system. Nice find. 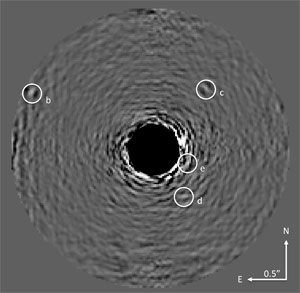 The star is at the center of the blackened circle in the image. The four spots indicated with the letters b through e are the planets.

The star in the op is a different one, the image above is star HR 8799.


OK, no worries. I just hope the Terrestrial Planet Finder get's re-funded and launched. Then we are talking imaging Earth sized worlds....so we can analyze the light to determine chemical composition, and possible signs of life. Now THAT would be exciting, and maybe get you that alien you seek.
edit on 3-6-2013 by Krakatoa because: Fixed spelling and other fat-finger errors

Originally posted by Astyanax
reply to post by LeLeu


I'm not sure what your point is, are you trying to argue who's is bigger or something lol
Regardless of how bright the image is, we're at the stage of getting images of planets and solar systems beyond our own. Pretty cool don't ya think?


It says ALIEN Planet not ALIENS!

It still baffles me that science (SCION) insists on looking outside our small window at the universe - when all that money could be used to govern better for humanity on our own planet.

I have a theory for the obsesion of space - humans are so isolated and lonely from the lack of opening and sharing with one another - they look outside of this reality to "escape it".

When a person with a healthy mind TRUELY looks at things - its useless to spend millions - billions on looking at stars, planets (and whatever hides in the darkness) .. All we can DO right NOW is just LOOK. When we have an absolutly gorgeous planet right under our feet!

Spend our money on keeping it clean, healthy, as well as making humanity more equal. Then when all is balanced here, we can turn to space. But those in government are selfish, carless, and dont want equality. We spend money to look at space - while they are black-budgeting top secret space craft and cruising it!

What a shame.. Regardless, thanks for sharing the article OP. Even though I have a distaste for those who care more about the outside then the inside..(in terms of space rather then their own beautiful planet).

I don't find the title misleading. perhaps you don't understand the term 'alien'.

Searched and didn't find it...so, here it is.

You know, I'll bet that's just what the astronomers said!


Looks like the Terrestrial Planet finder is in some sort of funding limbo at the moment?
Are they going to build it? I hope so.

Pretty sure the James Web Telescope will be built though.

This is good news for us.
. There are other planets sailing around other stars. What if we eventually discover an Earth like planet? In the Goldilocks zone. A spectral signature that shows organics oxygen,oceans of water.( All our favorite things).But also something odd. A signature that points to recent, large amounts of radiation being released on the surface.

How would we digest a piece of information like that? Would we change our ways?


I've enjoyed all these years of Hubble photos. I hope we get another scope in space soon. Hubble won't last forever. And we get no more repair missions.

I know what you mean. Peeping at us right this very moment, just knowing for sure, and even smirking (in a way that only an alien can smirk). That a majority of the planet would rather be called XC4677DKD573-c

The vast majority of those planets have been found through indirect means - by observing the changes in brightness of their parent star as the planets orbit it. If you actually bother to pay attention, the article says that this planet "has been directly photographed [...]. Imaging alien planets is difficult, and this world may be the least massive planet directly observed outside of the solar system."

In other words, this image is significant because it is a relatively clear, sharp optical image of possibly the smallest exo-planet ever observed directly.