posted on May, 18 2013 @ 02:29 PM
link
Hello all! I have been wanting to share a story and photo with you for some time now, but I had to learn how to upload and post photos first and I just didn't have enough time to mess with it. So I finally got off my butt and figured it out, and would like to have you take a look at a photo my family has had for 40 years now.

I need to explain a bit first, however, so you know the history and the little story behind the photo.

Many moons ago, in 1971 to be exact, my Mother had just graduated high school, and began her summer with a trip to Ruby Falls in Chattanooga, Tennessee. For those who have never heard of it,Ruby Falls is one of the largest underground waterfalls that you can visit in the United States. It is located within a massive cavern and, from what my Mother remembers, is very beautiful. I've never been. ANYWAY, so she took the guided tour, which I believe is the only option there. While walking through and snapping pictures, she saw a beautiful rock formation a couple feet from her so, of course, she decided to take a photo of that as well. At the time, she had no idea of the vastness beyond the rock formation that she was trying to photogragh because the cave was not lit up in that particular area. Apparently, as the flash went off, it lit the massive area beyond the formation she was TRYING to photograph. In the brilliance of the flash, she caught something else surprising that she would remain unaware of until the film was later developed at her local drug store. There was only one photo of it, but it has kept my family and myself mesmerized all these years. So finally, we are sharing our little mystery with you!


In addition to just sharing my Mother's photo of this creature, I would like to find out if anyone has ever heard of or seen anything like this at Ruby Falls or elsewhere in the world.

We noticed that it appears to have breasts, indicating its gender (obviously), it also appears to be holding TOOLS and either has a pouch like a kangaroo or is wearing a pouch that maybe it made? We have often wondered if the people who worked there set this up somehow and it is just a dummy or something, but if they did, they did not instruct anyone to take pictures of the area, or indicate that there was any reason to even look in that particular direction. My Mother doesn't remember anyone else even trying to take a picture of the formation that she was. Also, to the left of the little creature, apparently behind it, there looks to be a mural of a similar looking creature on the cave wall..
I have spent many many hours searching for similar photos online and have found NOTHING like this!
So enough of MY thoughts, its YOUR turn! I ask that everyone please be as respectful as possible when posting replies as I will be sharing them with my Mother.. Thank you, in advance, for any input and for stopping by! 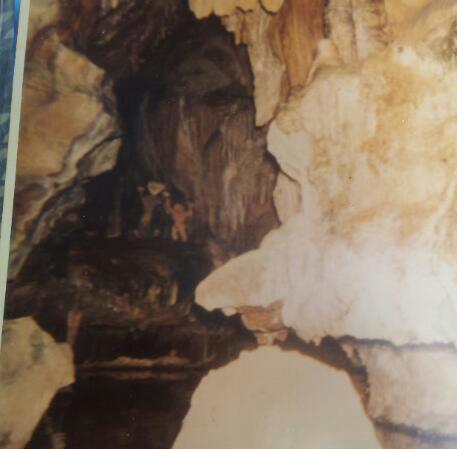 posted on May, 18 2013 @ 02:41 PM
link
To be honest I think it's a rock formation... If you look closeley there is a gap underneath the "creature" that dips into the rock so it's almost hallow underneath... It almost looks like a hyroglyph. Sometime's when you see certaint things your mind trick's you into intepreting that image as a face or a body or whatever. For example I found a my own create in your picture, I named him stone face. It's all on how your mind see's things... but if it was a creature it doesn't seem like we can pull enough evidence out of it to declare anything critical. Maybe ill take a deeper look.. Thank's for posting.
edit on 18-5-2013 by BruceEFury because: er


That is a possibility, if the creature IS actually a rock formation I am very impressed with it either way!

posted on May, 18 2013 @ 02:42 PM
link
I used to live in the Chattanooga area. The story was that there was an extensive cave system
under Lookout mountain. Ruby Falls is several hours from the natural entrance which is kept closed now.
It was known that the Falls was close to the surface. After a careful survey, the elevator was added to
provided easy access.

Neat picture. I think you've got a spook, rather than a creature, though. I never heard that Ruby Falls was
haunted...until now.

posted on May, 18 2013 @ 02:42 PM
link
the dark area looks like chewbacca wearing a hat, then I realized you meant the small figure in the middle of the pic. After the pic was developed did she ever call them and ask if others have ever seen something like that?

posted on May, 18 2013 @ 02:43 PM
link
I have been to ruby falls. Probably 15 years ago or so.
I do not remember that being there. I remember no petroglyphs.
I think if there were any there, the tourist-trap place would have
made sure to include it in the 'tour'.

BTW .. disappointed that the 'Ruby Falls' was not red or with
gems ... kinda expected it to be that instead of 'Ruby' being
the fella's wife or girlfriend or whatever ....


I think we see the rock you are pointing at, its a rock lol....Bruce is pointing out how easy it is to see things that arent there. It may look like a person, but given its shade and what not, its a rock.

I could find 1000 images showing rocks that look like people, it doesnt make them any less a rock though.


Thank you for your reply, I will surely find.out what kind of camera and film. Hopefully she will remember!! Lol, glad some of you are paying attention to what I was talking about!! Ha ha

posted on May, 18 2013 @ 02:55 PM
link
I am on a cellphone and I have to charge the stupid thing already, I will be back soon! In the mean time, people PLEASE pay attention to the smaller pics, you will see what we are talking about! Thanks to those who have looked carefully! Lol


I think your idea that workmen may have made a fake troll is the most likely.

Originally posted by ConstantConfusion3
reply to post by AmberLeaf


Ive seen them, i saw them when i first replied. I put the image in photoshop, zoomed in, looked at the surrounding rocks, and can say without a doubt what you are referring to is indeed a rock that...it may look like arms and legs, but they are rock features.

I cant explain it to you, as you believe its a creature, theres no point in my trying. Google rocks shaped like people, there are millions. As Bruce pointed out, rocks can look like faces too, his is far more convincing in my opinion. You can actually see easily recognizable facial features...but its just a rock, like the creature you are adamant isnt a rock.


Please send my kindest regards to your mom and thank her for sharing this with us. It's the first time I hear of underground falls, having only been inside one weird dry cavern.

As for what I see, I can pick out a plethora of forms and faces in both the foreground and back wall. The rear looks like a living mural to me with female and male forms both. As for the little creature that is supposedly rock, it sure looks amazingly human-like with its rounded breast and rounded belly.

posted on May, 18 2013 @ 08:54 PM
link
Ruby Falls is a fantastic place to visit. I was only six years old when I took the guided tour and I remember it well. I look forward to the day my children have a chance to experience it.

I do not remember seeing those figures in your pictures, but there were plenty of other strange things within the cave. I remember a particular space carved out in the floor that was supposed to bring bad luck if you stood on it. So of course I ran over and stood on it to prove it wrong. My mother was nearly killed in a car accident shortly after our trip. Freaky little coincidence.

posted on May, 18 2013 @ 11:21 PM
link
Thank you all for posting your thoughts! There was a question earlier as to the type of camera my mom used, she said it was a Kodak that took 110... not sure if that will help or is relevant but that is all she remembers lol.

Anyway, I don't doubt the existance of rocks shaped remarkably similar to humans, fish, dogs, faces, etc, I have seen quite a few in my time. The reason we do not believe what was captured in the photo was rock is because they don't give it any publicity at all and no one seems to have ever seen it. They do have rocks in the caverns that are in the shapes of animals and are pointed out on the tour and many websites. If this thing was a rock formation one would think they would take great pride in showing such an amazing natural occurance. Ruby Falls Wikipedia

I have decided to call the number on their website come Monday, to ask some questions about the photograph. Such as if there is a rock shaped like the figure in our photo, if not has anyone else seen this thing, etc. I will post any new info I get from them. Thank you kindly, again, for all your replies! I will be back on here tomorrow to answer anymore questions and whatnot.


Im sorry but I tend to agree with Bruce here. I believe you have been a victim of the ever so elusive Pareidolia effect. On a Sidenote, I live on lookout mountain in Alabama and that same cave system is said to stretch all the way down into this area. Was said to be used as a sort of supply line during the Civil War.

posted on May, 19 2013 @ 09:57 PM
link
I wish I could have scanned the photo into a computer instead of having to take a picture of it with my phone! I think that it lost alot of the detail we can see in the original. Even still, I have to say I am a bit disappointed in the amount of people jumping on the rock bandwagon! Oh well, I hope to get some answers tomorrow. If it IS a rock, it will surely be part of their cave tour and have its own name and all that jazz. I will certainly post whatever I find out tomorrow when I call them! Lol I will probably shed a tear if they say 'rock'! Ha ha


I appreciate your willingness to share. but dude, its part of the wall