posted on May, 15 2013 @ 01:27 AM
link
There are profound truths in physics and philosophy, things which will truly blow your mind. For example, one might ponder whether it is possible to have hot pizza and cold pizza on the same evening. The truth is; only a person with a refrigerator knows for sure. Everyone else is left to ponder whether 'room temperature' meets the clinical definition of 'cold' (and from an FDA perspective it does not).

Now, you may see the preceding as simply jest, but it is more than that (it's 'double stack to the mack' jest..heh, just kidding), in reality physics can, and does, dissect the simplest, most innocent of things, into serious questions. Eventually, what you will see is most people describe their world in a very vague sense, a very simplistic way.

Moving on; are we alone, we humans here on Earth? Hmmmm... Well, I guess that depends. Ah, more questions; define "alone", right? There's animals, but what about plants; what about bacteria, protozoa...what about atoms? That a series of electrons can orbit a nucleus of protons and neutrons implies some intelligent design, does it not? So a 'pet rock' can truly be our companion? Seems a stretch, huh? It all depends on perspective.

With little leap in faith, this brings us to ET; does ET exist? Well, has a meteorite ever hit Earth? Hmmmm... Not a fair question I suppose, but what about that rock we spoke of? I digress.

Okay, let's take a different approach, shall we? Let's just assume ET does exist for a minute. What if ET looked exactly like a human, if he behaved exactly like a human...if he reproduced, ate the same things, had the same beliefs, morals and societal structure as a human? Would he still be ET? (technically yes, but what if ET never said where he really came from?).

The point here is; many who seek out ET have a preconceived notion of what ET will be like. In reality, I would wager as many as 97% of those who believe in ET are completely unprepared for what form ET might actually take. Most perceive ET as a being, slightly different from a human, similar features but different (take Grey's for example). They have two arms, two legs, facial features...but they're different. What if the real ET was nothing like this? What if ET was a form of pure energy, an existence who had no shape, an existence who had no discernible individuality...what then?

People say "we might not have seen ET yet, but he's out there...maybe at Area 51 even". How do these same people know ET isn't sitting next to them on the couch when they make such an assertion?

How do these same people know ET isn't sitting next to them on the couch when they make such an assertion?


If there is no difference between us, then they are us, I mean we are ET. Which I think anyway. 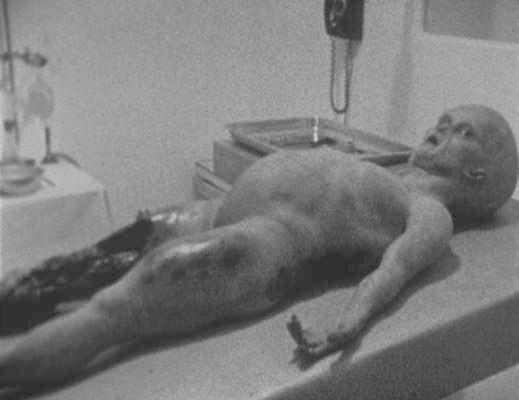 
Maybe i can help explain a couple things.

I Believe you are leading onto something. Yes.

posted on May, 15 2013 @ 02:35 AM
link
Nice post. Got a lot of thoughts going.
I guess there are no limits to what an ET could look like. But I think we can make some qualified guesses, based on our knowledge of earth biology and evolution, on what they might look like.

I remember hearing that nature loves symmetry and fractals. Fractals are mainly found in plants and fungi, like a branch for instance. Symmetry for animals and micro organisms. Since measurable intelligence is only found in the latter, I think it's fair to imagine that aliens would also be symmetrically build. But their amount of appendages aren't really limited by anything, so there is no reason to assume that they would only have 2 legs and 2 arms.

Space travel would assumably also leave it's mark on any creatures physiology. They'd have small bodies. It would make sense if they were invertebrates, like squids or or jellyfish. Exoskeleton could make some sense as well, but I'd imagine it more in the form of technology than as an evolutionary trade, like our spacesuits. They might also be mechanical themselves. Uploaded into computers.

This is just of the top of my head. But I think if I gave it a few hours, I would be able to come up with some cool concepts.. To the drawing board!

It would have to be something consisting of an energy compound that neither generates heat nore cold.
We do not see this effect when we turn a light on in the room.

Or said light being with glow stick technology lighting up at the foot of your bed.
Inter Dimensional, The very meaning of freely converting between dimensions.

Lets pretend for asecond that Dimensions are the 5 elements. And that higher dimensional is the 5th Darkness. IF everything is on the lower plain ex light. Light cannot be above darkness for it is a physic element.. fire.

Well its easily as said that any such race could attempt to appear like another, Almost like an american wearing a nazi uniform doing attrocities in a concentration camp because he thought it was a good idea.

But its not as dirastic as everyone claims it so. To know and see a definitive of both. KNOWING exactly what it is. Is very tough. One will obviously be overwhelmingly more powerful than the other.
And that one always ends up being a dark being.

Its not really a coincidence when people ask them to leave they usually do. Then they are confused... They visually saw and felt a demon. But are confused because it never hurt them. Some people it vanishes from their life altogether and they are left wondering if that prayer to Jesus was what did it.
it was because it saw your lost faith, In the confusion of the book you read. Not knowing the quotes about the wolves and the lions.
This is why they are greiving. And are hostile. Ba'al's corruption is never ending.


That was a lot of information, dude.
Not sure if I understood half.

You say dimensions are the 5th element. I assume the previous four are the classic medieval elements; water, fire, earth and wind. In that case you kinda lost me.

It sounds like you have some interesting ideas. But most of it sounds like a combination of guess work and a vivid imagination.

How do you know these things?


aha objective common sense still exists i see. The question shouldnt be "do aliens exist" but "is it possible that alien life doesnt exist" because to me, well how the # can humans be so arrogant to even doubt its existence elsewhere? It should be a common fact even without any proofs.


Let me explain it a little further.

Processes that include the 5 elements and such are often described within some form of dimension.

Hope im making as much sense as possible.

So anything of the 4 physical states or 4 physical elements that make up the world around us came from within a singularity of darkness at one point. Our very existance was extracted from little tiny black balls.

The element of fire only masks darkness it does not chase it away. Therefore a room will always be dark no matter what.

So when someone wants to confuse you, they will start mentioning a bunch of stuff that does not make sense. LIke their explaination of dimensions. Its quite futile. I know all this as a fact because i personally have seen aliens with my own 2 eyes with other people. And they were made of such power energies as dark matter.

My point, Any being made of pure darkness can freely convert any object living or not made of the 4 physical elements. A being of such properties can absorb your soul by reconverting the mass into energy they can feed on. Such events are recorded in Egypt and elsewhere with the mention of the god eaters.

The god eaters were made of black matter and black energy. Able to convert another beings soul into food.
This is where the legends of the soul eating king comes from.


I could sort of follow you on the first part, but then you lost me again.
To me your interpretation of the world, with these four elements seems crude and insufficient. The categorization seems more abstract than logical, and even though you describe darkness as being the fifth and therefore the most powerful element, the order of these other elements seem rather random.

You say:
- Water is liquid
- Wind is gas
- Fire is moving protons at various wavelengths of light
- Earth is anything that is solid

Liquid is a state, and so is gas. Solid things can be liquidized and vaporized and therefore your definition of water, wind and earth are basically the same things, just in different states. But energy in the form of light is a totally different thing, and frankly so is darkness.

I'm no expert on this. But it seems like you are talking about some heavy stuff, that the scientific community doesn't even have any answers for yet - and I think you've got it wrong.

At the end of your post, you talk about ascended beings of darkness who feast on human souls, whom you claim to have seen with your own two eyes.

This is the point where I ask for evidence or suggest that maybe you talk to somebody about it - either to prove your point or to get some help. Cause that is just crazy.
You say a soul has a mass. What is that all about. Last time I checked there has never been any physical evidence that anyone had a soul, and the idea that someone could convert this into something different and then absorb it, just seems ridiculous.

Sounds like a badly written episode of the Star Gate series.