Why Was Jesus Denied The Act OF Physical Procreation, as he was human.

posted on Apr, 29 2013 @ 09:55 PM
link
You would think the Son of God would have the ability to create for its Grandfather/Grandmother appropriate siblings. Are we not its components, descriptions of itself? Who would have been his wife, (the Magdelene), the denial, any association to a god form mother or father?
edit on 29-4-2013 by vethumanbeing because: (no reason given)

posted on Apr, 29 2013 @ 10:08 PM
link
I think Jesus did have a kid. He had a beloved disciple named John (Mary) who had a baby at Jesus' "baptism" in the Jordan. Jesus' baptism was actually Mary (Magdalene/mother of Jesus) giving birth to a baby in my opinion.

In that instance, Jesus is actually Mary and John the Baptist is helping his wife give water birth. I know, complicated right? The dove coming down on Jesus was actually John and Mary's baby being born and receiving the holy spirit.


His true miracle? As opposed to all of the other miracles He performed, including being raised from the dead?

Also, I fail to see why the writers of the Gospels would have to shroud the story of Jesus's baptism in the most esoteric kind of symbolism, to where nobody would ever guess Mary was Jesus, John the Baptist was Jesus... or... wait... what was it again? Mary was John? Or maybe the Dove was John. 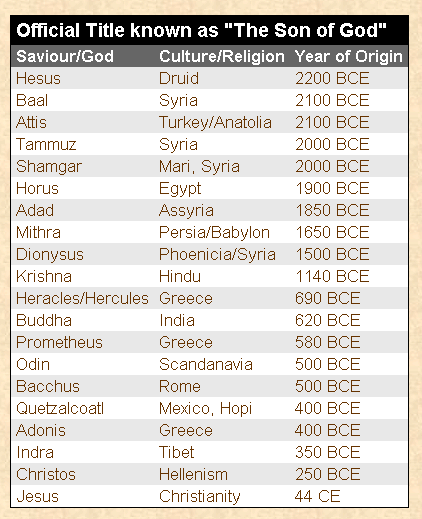 uhh.. could you please be a little more specific?


Well, we can narrow it down. Which one of those died for our sins?


He didn't perform those other miracles in my opinion, they were inserted after the fact to make Jesus seem like more than normal.

Why would they cover it up? To hide Jesus' true identity of course, and to create a false religion around his life. Plus, they needed to add the virgin birth in there somehow.

It's complicated I know, but baptism parallels childbirth in many ways, which led me to this conclusion. I'm not against changing my theory either, it's just where I'm at right now.

The story of Jesus isn't as cut and dry as the bible makes it out to be.

Ever seen a painting of Mary Magdalene? She's almost always carrying a skull. John the Baptist was supposedly beheaded and I think Mary carrying his skull points to them being in love. My personal opinion of course.
edit on 29-4-2013 by 3NL1GHT3N3D1 because: (no reason given)


Create a false religion and forgo all material possessions, travel vast distances to preach, and subsequently give their lives for just a normal guy who didn't actually do any of the things they said He did.

Sure. Makes total sense.
edit on 29-4-2013 by FollowTheWhiteRabbit because: (no reason given)


You'd be surprised at what people will do for someone they love. Just because his followers dropped materialism and followed him around doesn't mean he was anything more than normal.


Nobody would die for something they didn't believe in.

Besides, having no actual evidence to suggest that He didn't do those things, I fail to see how you can come to the magical conclusion that they just made up the miracles of Jesus.

Originally posted by 3NL1GHT3N3D1
I think Jesus did have a kid. He had a beloved disciple named John (Mary) who had a baby at Jesus' "baptism" in the Jordan. Jesus' baptism was actually Mary (Magdalene/mother of Jesus) giving birth to a baby in my opinion.

In that instance, Jesus is actually Mary and John the Baptist is actually Jesus. I know, complicated right? The dove coming down on Jesus was actually John and Mary's baby being born and receiving the holy spirit.


Actually I totally understand this. Problem to explain how John was birthed (pretty much same timing sort of) by the cousin of Mary (actual). Ann mother of John sister to Mary? Alright so Jesus is the default actuary, of the Original John the Babtist (in case he failed, which he did/murdered by Salome). Dove quotient failsafe as in IF YOU BELIEVE THIS YOU ARE IN TROUBLE. Cannot quantify the "lets not profligate the specie and see what happens field of view". NO Fys, no Specie; If Jesus is the miracle of UNBIRTH, why have the reiteration of the nuns and priests to redifine it. IT WAS A NO BRAINER. I must say again, what would Jesus BABY look like, (US).

Just because the miracles are written down in a book doesn't constitute it as being true. Men wrote the bible, not god.


You would give your life for your mom and dad because they're your mom and dad. Jesus was not their dad, He was a teacher who they saw perform miracles, fulfilled Jewish law and prophecy, was murdered and rose from the dead three days later.

He promised them eternal life. There was literally NOTHING until the resurrection that would have indicated Jesus could make good on His word, they would have just had to trust Him. But He did more than just give them His word, he gave them His blood, and they all gave witness to seeing Jesus alive again with holes in his hands.

They believed He would give them eternal life. They were not afraid to die, which each of them were, every one of them, imprisoned, tortured, and murdered (with the possibility of John, who may have been John of Patmos, though they tried to poison him).

I used to be a Buddhist. The Gautama Buddha taught the way to the liberation from the wheel of samsara. But you know what? I sure as heck wouldn't die for him.

But I would die for Jesus, just as his apostles were willing to, which they all did while preaching the Good News.


I have no problem with these definitions, I agree with them. Why is it that we are relagated to so few when the plethora of truth is here right before our eyes, Pagan, past life history. I distrust written scripture; I sense it as a bullying. Somewhere something was deliberately changed or disregarded as being dangerous and wiped from human consciousness. So be it; I remember.


John the Baptist's miraculous birth was fabricated along with the virgin birth, they never happened. John the Baptist was actually the one crucified, while Mary Magdalene (mother of Jesus) and John (baby Jesus) were at the foot of the cross.

There's a lot of switching names within the story, it's really complicated and hard to articulate, but it makes sense to me.


Yes. Technically the Rapture doctrine makes sense, but that doesn't make it true.

Actually, the Rapture doctrine makes more Biblical sense than what you're suggesting. Let me guess, something with Da Vinci, right?


ETA... oh, i see that title has been changed.
nevermind.
i guess you wouldn't want to be confused with pagans.
edit on 29-4-2013 by tinhattribunal because: (no reason given)


How do you know what they would or wouldn't die for? If they loved him enough they would, plain and simple. Jesus taught to love others as themselves and his followers practiced that, loving Jesus as themselves. They practiced and took his message to heart, meaning they were more than willing to give their lives for him.

Them dying for someone they love makes even more sense if they were not afraid to die, don't you think? They would have no problem dying because they knew they would rise to new life afterwards.

The resurrection is illogical, unless you're talking about reincarnation. Everything in nature works in cycles, why would life be any different?


Da Vinci was a very smart man, he painted symbolism into his paintings for a reason. You must have looked at my post history. If so, that's very disingenuous of you to act as though you "guessed" it.

But none of them had the blood that atoned for the sins of mankind. Past the cursory similarities which are, at best, fleeting, not one of the gods you've brought up are remotely like Jesus.

Maybe you should stop copying and pasting things from websites and pick up some books, friend.