The FBI has released photos of two suspects it wants to identify as part of the investigation into Monday's Boston Marathon bombings.

CCTV captured the two men, one wearing a dark-coloured baseball cap and the other a white cap, near the scene.

FBI Agent Richard DesLauriers warned members of the public not to approach the two men.

posted on Apr, 18 2013 @ 06:15 PM
link
Finally the FBI has released the video which shows the suspects in question. They appear to be behaving normal in the video, although the FBI say they dropped their backpacks, which they suspect were the bombs. Hopefully these are the right guys, and not another case of mistaken identity. The FBI have warned these men should not be approached as they could be armed and dangerous.

www.bbc.co.uk
(visit the link for the full news article)
edit on 18-4-2013 by Cynicaleye because: (no reason given)

posted on Apr, 18 2013 @ 06:34 PM
link
Well I now see the hoodies the FBI talked about yesterday. So there are two involved. The boyo at the back should be more recognisable with his 'horseless gait' Definitely a conspiracy going on here, they do look to be together, although seemingly apart at the various video points.
To add, you have to consider though that there could have been more confederates as well.
edit on 18-4-2013 by smurfy because: Text.

These are the guys they're looking for.

posted on Apr, 18 2013 @ 06:44 PM
link
Just wondering if anyone that watched the FBI news conference noticed something odd. When they opened up for questions, the second question was by a guy who basically started shouting something. They quickly cut him off and moved on. Does anyone know what he was saying?

posted on Apr, 18 2013 @ 06:55 PM
link
This is the FBI surveillance video of the suspects/persons of interest. I didn't see it posted here.
This is the website to submit tips if you think you recognize either of them: bostonmarathontips.fbi.gov...


Good work getting the pictures up. The smaller guy, (horseless) seems to have a mobile in his hand most of the time, but one of those pictures looks as though he is talking on it, (when that particular picture was taken might be helpful) while the other guy is hands in pockets.

now their assisnment was to place the backpacks for the bomb sniffing dogs to find...

just connecting the dots from the info thats being trickled to the public
edit on 18-4-2013 by St Udio because: (no reason given)


Scope and a Beam

Think too many people are grasping at straws iincluding the FBI not going to repeat the mistake of yesterday with lazy reporting I am going to wait for more concrete evidence to make any judgement.
edit on 18-4-2013 by neo96 because: (no reason given)

Same guy alright. I hope those murky feckers get caught. In edit, The other guy in the background, (see avatar's picture) seems to be in company. it is something of a weird picture though, the man in the foreground who looks like a padre, seems like he has a smile on his face, could just be shock though. Over the far right, and in smoke haze there is someone with a distinct pink blob for a face?? weird!

Okay the full picture loaded below,

Looks like just after the explosion. No backpack visible, but inconclusive. More photos should be turning up soon. 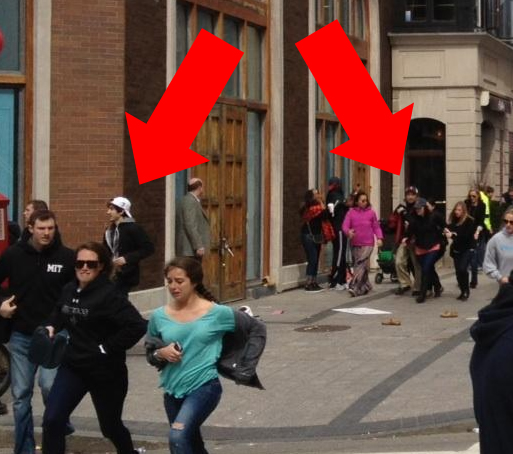 Scope and a Beam


Ah I see! I didn't notice the other suspect before. Very eerie how he's practically staring straight at the camera.

Let say for the sake of argument it is those 2.

The bombings happened about a block apart so how could those 2 be in the same photo?

I do find it odd that nobody has taken credit yet, but we didn't have drones in the past, they may never take credit again.
edit on 18-4-2013 by AGWskeptic because: (no reason given)

Originally posted by Danbones
or they are patsies

If they are though I would hope a non-bias'd independent investigator would set up surveillance on their operations.

Once these guys are id'd they should be monitored to see who they contact.

Would be ultimate irony to find it goes back to someone they know.

That is interesting, he appears a little unconcerned compared to the people around him.

People running away, OR looking towards the explosion, but he's doing neither.