It's happening all over again....Saudi terrorists blow up people, and we send them home!!!

posted on Apr, 18 2013 @ 10:45 AM
link
Looks like this Saudi "person of interest" is being deported instead of being arrested, for reasons of national security (terrorism).

Likewise, the photos of the other two suspects have YET to be released to the public....WHY? Because they too are Saudi nationals from prominent families, so they are likely arranging their flights home too!!!

What other reason? Wouldn't you want the public's help?

Obama and Kerry both met (in an unscheduled meeting I may add) with the Saudi Foreign Minister yesterday. This is why the news was reporting an arrest and press conference...they had this Saudi kid. Instead, it was all retracted, because now we're sending him home! (just like we sent Bin Laden's family home after 9/11).

Now, I'm not one to think the government planned this or 9/11. I do think they are covering it up though, all to maintain a foothold in the Middle East, so we have a staging ground for any actions there. I get it....but at what point do we get tired of being stabbed in the back by these folks?

STOP THIS KID FROM LEAVING!!!

After they get these other two home, THEN they'll release the pics, of two white boy patsies that were in a militia years ago, no doubt.

posted on Apr, 18 2013 @ 10:50 AM
link
Fox news said that wasn't the case with Saudi terrorists, course they could be lying but the arguement i seen of the one guy that looked high or drunk was saying they were deporting and then the other guy was like "no where did you hear that from?!"


I'm sure my views on this have nothing to do with the official position of ATS.

UPDATE 10:50am ET: Joel Cheatwood, President & Chief Creative Officer for TheBlaze, told Glenn on the radio show: “Just got a note from one of our investigative reporters that she has been told that there is now discussion that they may not allow this man to be deported.”

On radio this morning, Glenn broke the news that Abdul Rahman Ali Alharbi, the Saudi Student who was reported as a person of interest in the Boston Marathon bombing, is set to be deported under section 212 3B – “Security and related grounds” – “Terrorist activities”.

An FBI source has told TheBlaze that the Saudi Student was “taken into custody”. This means, when we he was reported as a person of interest, he was actually a suspect the entire time.

An “event”, or file, was created on the student three days ago. The file contains his deportation record and the reason he is being deported. According to ICE the reason is section 212 3B –”Security and related grounds” – “Terrorist activities”.

The student’s visa has been revoked. The FBI said a file was started “just in case he was found to be connected to the crime,” however, the file shows he was scheduled to be deported.

This was not precautionary, it was listed as “orders.” The file was immediately classified. Sources are telling TheBlaze the deportation order will be classified as well – requiring a FOIA to access it.

One agent told TheBlaze he believes a “voluntary” departure has been signed – that means the Saudi student could be out of the country as early as today.

While the official story was going to be “he wanted to go home,” the student was actually being deported. TheBlaze has been told that by a source that this “looks like they were trying to make this a ‘lone wolf’ crime, so the Saudi government would be spared embarrassment and the U.S. would avoid explaining how a terror cell was active when we had AQ on the run.”

FYI: The Blaze incorrectly takes credit for breaking the story. This was broken on Hannity last night.
edit on 18-4-2013 by Gazrok because: (no reason given)


Yeah I agree. Wasn't this college student, aka the Saudi, cleared of wrong doing? Is he even in the recent pictures that came out of 4chan?

Why is he being deported though?


He wasn't cleared...he just wasn't arrested...and it seems it is because they are going to deport him instead.

The pics of the other two suspects they are looking for have not yet been released to the public.

As to why he's being deported:

reason is section 212 3B –”Security and related grounds” – “Terrorist activities”.

This rant is personal, and is my posting as a member, not a mod or as staff. I'm just frustrated that this whole thing is happening all over again, and just like before, nobody is going to see it for what it is until months later, even though it's happening right in front of our eyes, if we simply open them.
edit on 18-4-2013 by Gazrok because: (no reason given)


I am working under the impression this possibly could be by design.

Please review my thread I created last night, Saudi Arabia - The next front in the War on Terror? and read through to the more recent posts I created discussing speculation on topics such as Saudi Arabia's potential of having a nuclear weapon (or easily getting one).

I think you were intended to be this angry at Saudi.
Angry enough to justify some extreme political measures.

I do not know what shape or form any "contingency operations" in Saudi Arabia may take, but I do sense the time is coming for something to go down.

By the way, I am against whatever is being planned here because using deceit and treachery to facilitate political maneuvering is unacceptable, the ends do not justify the means.


I have to tell you. I've lived there...in Riyadh, for almost three years. Most Saudis are very nice people, as citizens. But, there are some really rotten apples there too, and they are the ones causing it...them and our administration bending over themselves to tongue their rectums. I'm not as angry at Saudi, as I am at our government for doing this yet again. Try them HERE...don't deport them.


He wasn't cleared? I thought I read that he was but then again who knows what's really going on. On a side note Obama did have an unscheduled meeting with the Saudi's yesterday or day before.


Obviously he is included in the Saudi ties to the Bush family. Oh wait...

He's tied to a prominent Saudi family, yes, sharing the same clan as a lot of folks on that 89 most wanted terrorists list.


If what I've read in the past has any meaning to it...
The focus is for the public to accept war in Saudi Arabia.
That justifies our reason because they want to get away from the dollar as the reserve oil currency. If they want to get away from it, the elites just make up a reason to level the country.
To make sure the price goes to $200 a bbl.
Then we open our own oilfields and profit tremendously.
Did I say we? I meant they.
We don't gain anything.
We just fund it all.

I don't know about any of you, but it sounds about right.

Originally posted by havok
reply to post by muzzleflash


If what I've read in the past has any meaning to it...
The focus is for the public to accept war in Saudi Arabia.
That justifies our reason because they want to get away from the dollar as the reserve oil currency. If they want to get away from it, the elites just make up a reason to level the country.
To make sure the price goes to $200 a bbl.
Then we open our own oilfields and profit tremendously.
Did I say we? I meant they.
We don't gain anything.
We just fund it all.

I don't know about any of you, but it sounds about right.

Thank you I am going to copy paste your quote in my thread about Saudi Arabia being a new front in the war on terror..

If you check in my thread you will see where I link to quotes from Project for a New American Century / American Enterprise Institute mouthpieces, and even an ex CIA Director, talking about how Saudi Arabia is the central focus in this global war.


I've always wondered if that was our agenda, but if so, we need some new refineries to make it happen.

All I know, is I'm tired of seeing mass murderers sent home on planes.

Originally posted by Gazrok
reply to post by havok


I've always wondered if that was our agenda, but if so, we need some new refineries to make it happen.

All I know, is I'm tired of seeing mass murderers sent home on planes.


Be wary of sending kids on planes over there to become mass murderers.

posted on Apr, 18 2013 @ 11:31 AM
link
Maybe, just maybe the kid has been eliminated from the investigation and they found his Visa has expired?

Originally posted by Cobaltic1978
Maybe, just maybe the kid has been eliminated from the investigation and they found his Visa has expired?

So the leader of the free world meets with saudi diplomats to discuss this mans expired visa. Makes sense to me now.

posted on Apr, 18 2013 @ 11:44 AM
link
You're then missing the part where the reason for deportation was national security - terrorist activities...

Translated story from Okaz, a prominent Saudi newspaper. The article also shows a hospital picture of the student, smiling...

Of course, take this for the state media spin that it is, but it seems to confirm the whole deal that went down yesterday, doesn't it? 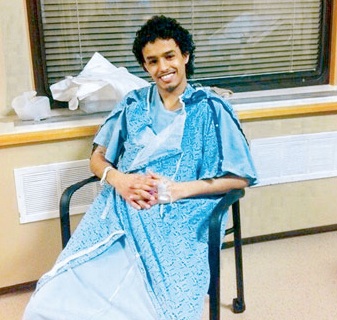 Ambassador to the royal crown, Adel ben Ahmad Al-Jubeir, had several phone calls with the paper as well as with the Royal family. He stated that very high-ranking, U.S. government officials stated that there is no suspicion of any Saudi nationals relative to the Boston marathon explosions.

The Saudi Consul General in New York, Abdel Karim Alqin assured Okaz that all Saudis have been cleared and two Saudis were injured, including Alharbi and a Saudi female doctor named Nura Khalid Saleh al-Ajaji.

Three other Saudis were cleared from the forbidden area, two of which were put in a hotel at the expense of the Saudi consulate

Alqin disclosed that he cleared three Saudis from the forbidden area and housed two of them in a hotel; the third stayed with a friend. He also met with a group of Saudi students, telling them to carry on with their lives and that Saudi ambassadors would handle everything. These students were also told not to cooperate with any media entities and to lay low.

Dollars to donuts the TWO put in a hotel at the expense of the consulate are the two pictures they aren't allowing us to see.[