President Vladimir Putin has announced a space initiative to put a person on Mars, build a moon base, and shoot down any foreign threats.

I think this is something all of humanity should be proud of. We should never cease the exploration of outer space, and despite being an American... If NASA is beginning to fail and private-sector space exploration is still many years away, I'm just glad to see someone else is ready to pick up where we left off... Although I'm not so sure if "shooting down foreign threats" was the greatest choice stated goals. With $50 billion suddenly thrown into the mix, that's a bit of a scary prospect. At least for a non-Russian.

Putin and other leaders laid out a new timeline like this: Launch from Vostochny in 2015, launch a manned mission by 2018, and by 2030 have the ability to take out threats from other countries through space. Also they want to start a permanent moon base.


Since putting the first man into space 52 years ago (this announcement comes on the anniversary of Yuri Gagarin's launch), Russia's rockets haven't had the most updated tech, and since 2010, multiple launches have failed. Part of the cash for the program will be used to modernize those systems. 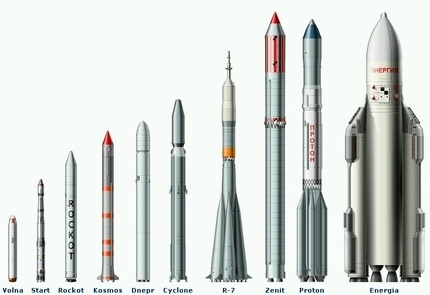 AFP Link
Bloomberg Link
Popsci Link
edit on 15-4-2013 by HairlessApe because: (no reason given)

posted on Apr, 15 2013 @ 04:26 AM
link
That's great news, I just want to see a human on Mars before I kick the bucket.
I dont care what country they come from. I think that the worlds different space agencies should all merge in a united effort in space exploration.

Originally posted by LeLeu
That's great news, I just want to see a human on Mars before I kick the bucket.
I dont care what country they come from. I think that the worlds different space agencies should all merge in a united effort in space exploration.

posted on Apr, 15 2013 @ 06:19 AM
link
If you stop and think about it, There is little need for heavy--lifter rockets anymore. The ISS is on its final years and there is nothing concrete in the future by the major interests other than lofting satellites of one kind or another.I'll venture to suggest that that $50B is to be spend on a Russian version of our triangles.

If you don't know what the triangles are, they are where our programs and money went to replace the shuttle. When that so very visible death trap was retired, the space race, never dead, went behind black doors as weaponizing space became the dominant feature of all efforts. The Space Defense Initiative so-called "Star Wars" program is alive and well, and as the name implies it is a 100% military operation.

The US has an active Space Force--its actual name--and it is ludicrous to believe that with the shuttle out of the picture that we have lost the will and interest to be in space. We are out there any beyond in the triangles, the greatest military weapon every devised.


I'm pretty sure the ISS has quite a few years to go... In fact, new telescope equipment is due to launch and be sent to the ISS in 2017. I'm not sure what the device is called, but it launches along with TESS and NICER.

And that means that they are going to contact UFO guys and turn American people into slaves.


I doubt Russia will build a moon base once they get back there and see that the aliens that have been settled there for quite a while now and don't want anyone infringing on their turf.

And America never quit the space program. The x-37 is the Air Forces space shuttle that never gets talked about on the news, so most people do not know about it. So it is still around, just out of mind of most folks.

posted on Apr, 15 2013 @ 12:36 PM
link
While I sincerely wish America hadn't all but left the field of cutting edge space exploration by default of funding cuts, I'm glad humanity is still pushing hard to get there. NASA's budget for the entire agency and it's operations (From Voyager I and II missions running today to Mars Curiosity Rover as I read it) is under 20 Billion annually.

Given that fact of money? I think Putin can do amazing things with 50 Billion invested if he insures it's used to maximum effect.

I've said before and sincerely believe that once beyond the atmosphere and into space, the divisions of nation, race or religion largely do or should fall away to irrelevance. Those differences are cultural and political that hold meaning on Earth. In space? I believe we need to approach it as Human Beings, representing a species....not a nation.

So, in that? I wish the Russian Federation Godspeed in getting there and getting it done. I don't care WHO gets the job done, as long as humanity expands it's presence and "eggs" beyond this single basket.

Instead of individual countries vying for supremacy. So someone is going to stake in and fence up the moon and Mars with number 8 wire ?

One one hand: this is a good news, as I always like when something is invested in science.

On the other hand, it is sad. It seems as a new Cold War is starting in space programs. Who gets first to Mars? Who makes the first Moon Base?

And the ones who suffer from it are the people. For Russians it is not easy to live. US and Western European countries are in much better condition. The salaries are low, roads in bad condition (especially in country sides), corruption is high, poverty is quite high. The country has lots of money, although the people do not get much from it. Knowing many russians and their life quality, I believe the 50 billion would do much better, if it was invested in making the country a better place to live at for an average person.

At least the money went to something worthful, instead of defense industry
edit on 15-4-2013 by Cabin because: (no reason given)

posted on Apr, 15 2013 @ 01:04 PM
link
Well perhaps this will be the kick in the butt the US needs to launch a new ambitious space program. It was Sputnik that seemed to galvanize support behind Kennedy and NASA. I do believe fully that there is no question the US would never stand for Russia having a moon base. Either by sabotage or flat out attacking Russia I do not think it is in the US interest to allow this to happen. They could also sabatoge it once they started to assemble it on the moons surface in multiple ways.. I am on my phone but if you go to the PBS Nova site there is a great program on the Secret US space spy program (highly recommended). I also have studied the Reagan Star Wars program enough to believe we do have some capability to attack from Space. Most of it now is totally top secret and harder to get info on then getting a personal invite into Groom Lake. Time will tell... If it is not Russia I can see China attempting a very ambitious Space program as well.
Btw..50 billion sounds like alot of $$$. But in terms of space programs it is really not much money. That is like 25 f-35 strike fighters. I would venture to bet the x-37 space plane costs about that much to make and operate by itself.
edit on 15-4-2013 by GArnold because: (no reason given)
edit on 15-4-2013 by GArnold because: (no reason given)

posted on Apr, 15 2013 @ 01:19 PM
link
Russia has always had an admirable space program and I wish them the best in their endeavor. Humanity, collectively, awaits their success. Really, humanity awaits in nations success at establishing any type of outer space colony. Anyway, it is good to know that vision hasn't been lost on our leaders. Now to see whether Russian engineers find this endeavor feasible and executable.

I also have studied the Reagan Star Wars program enough to believe we do have some capability to attack from Space.


Of course, I'm sure you considered the fact there are other forces prohibiting human weaponistion of space.

Originally posted by wildespace
ALL YOUR BASE BELONG TO US

Nice one..... Someone had to say it! I guess the Red Planet will have the nickname for more than one reason, eh?

I'll have my son study Russian. The language of a new colony? Hey, we can hope.


If all the countries involved in space exploration made smaller contributions to a larger fund for the benefit of everyone, then exploration wouldn't need to be so expensive. Shame that's not what it's about. Let's put more weapons in space and ease the global tensions.

Originally posted by zonetripper2065
reply to post by mideast


No , I don't believe in UFO. I was kidding with those who are afraid of what they don't even know if it really exist.

+ I don't wish any harm on American citizens.

You better not judge so fast.


I'm an infidel everyone wants me dead. I don't take it personally.