The Ark of God found at Khirbet Qeiyafa..?

page: 1
38
<<   2  3 >>
log in
join
share:
Kantzveldt
+12 more
posted on Mar, 25 2013 @ 09:21 AM
link
In May 2012 it was announced the discovery of two miniature cultic shrines from Khirbet Qeiyafa, which the discoverers suggested were miniature models of the Ark of the Covenant, and which gave insight into architectural practises some 30 or 40 years before the construction of the first Jerusalem Temple. 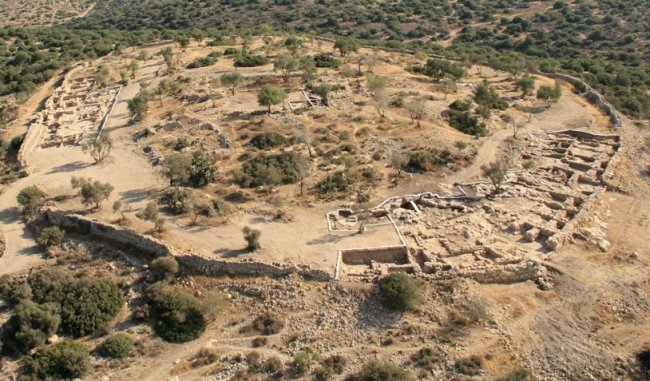 Garfinkel and Ganor presented three artefacts: two small boxes, one of stone and the other of clay, and a fragmentary stone artefact that looks like some kind of cultic stand. They were discovered at Khirbet Qeiyafa, which is a single stratum fortification in the Valley of Elah (30 kms southwest of Jerusalem) dating to c.1000 BC. It’s a significant archaeological site because it gives us a window onto life in the region at the beginning of the Iron II period, and some would argue bolsters the claim for the historicity of a monarchy under David and Solomon.


The two boxes presented are, according to Garfinkel and Ganor, miniature models of the Ark of God.


The Ark of God 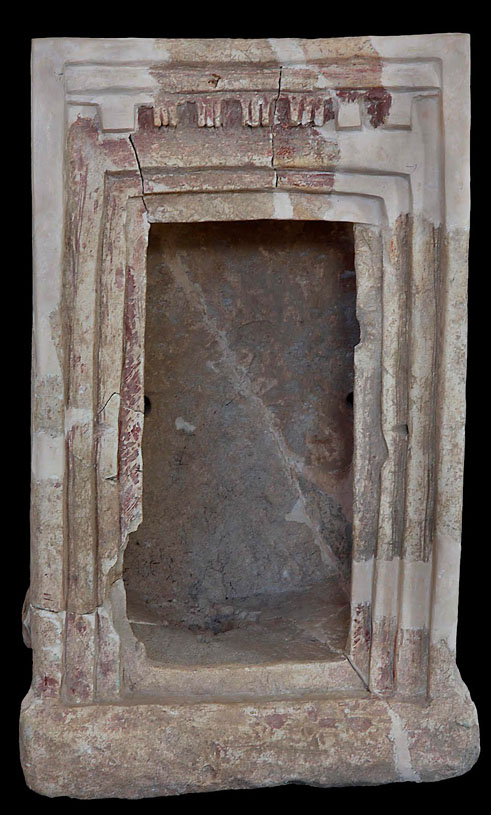 The stone shrine is made of soft limestone and painted red. Its façade is decorated by two elements. The first are seven groups of roof-beams, three planks in each. This architectural element, the “triglyph,” is known in Greek classical temples, like the Parthenon in Athens. Its appearance at Khirbet Qeiyafa is the earliest known example carved in stone, a landmark in world architecture. 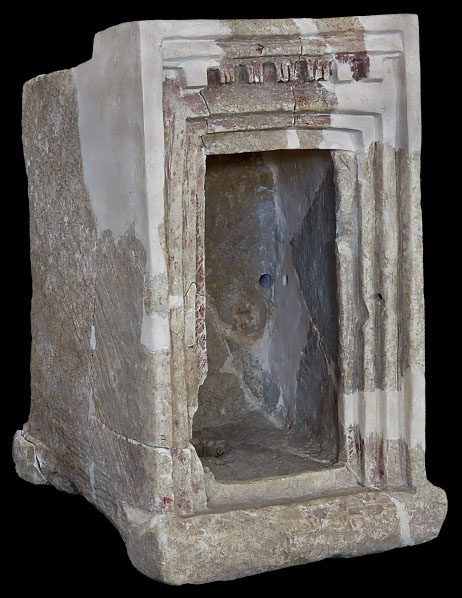 The clay shrine is decorated with an elaborate façade, including two guardian lions, two pillars, a main door, beams of the roof, folded textile and three birds standing on the roof. Two of these elements are described in Solomon's Temple: the two pillars (Yachin and Boaz) and the textile (Parochet). 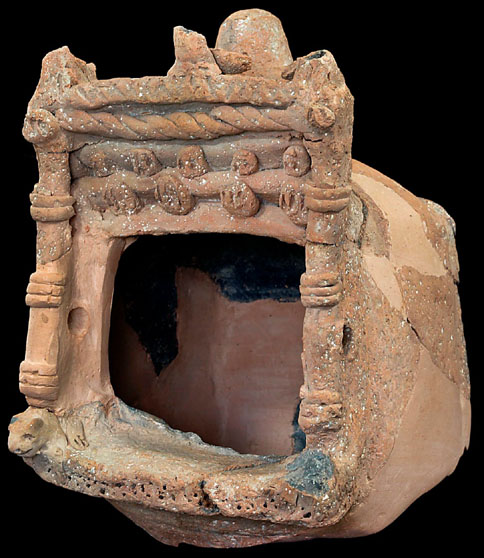 What the Hebrew archaeologists seem to be ignoring however is that these Arks/Cultic Shrines are far more likely to have been related to the consort of YHWH, in terms of Asherah.


Below is an example of an Asherah cultic shrine, it can be understood as relating to this Goddess due to the whirl on the columns, this symbol dates back to Sumeria for Inanna or Ishtar, and gave the term Nin or Lady. 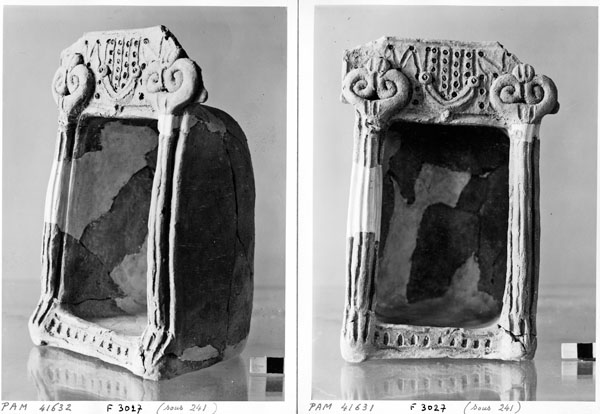 Here's another example of an Asherah construct utilizing that symbolic motif; 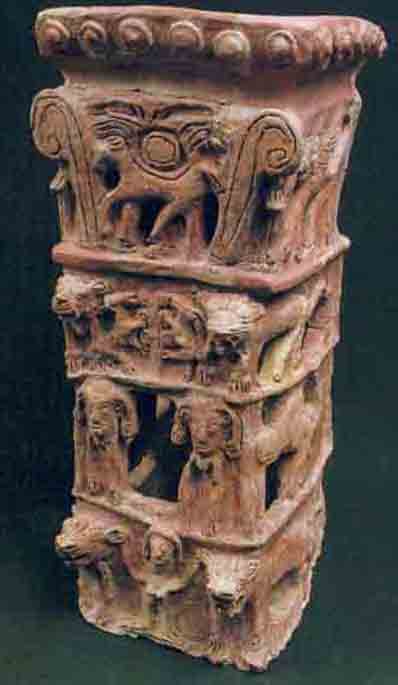 It seems likely then that any architectural elements seen in the shrines were copied from Caananite models of shrines of Asherah; 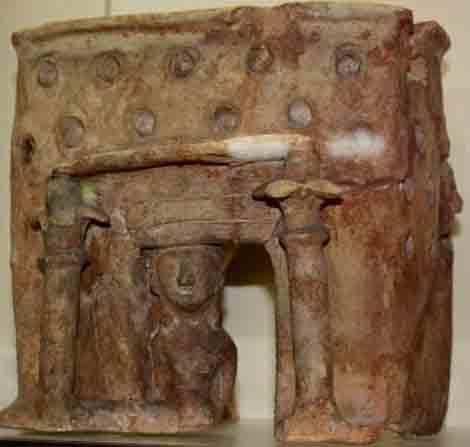 An example of this is the lions that are found at the base of the columns in the ceramic example, a known aspect of the Asherah shrines; 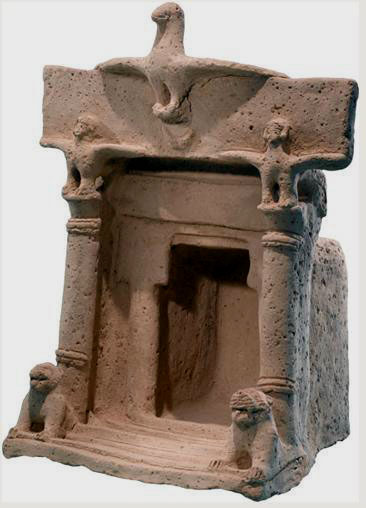 Interestingly the Temple of Ain Dara which i recently looked at shows the most parallels with the Temple of Solomon, that was dedicated to Teshub, a storm/mountain God and champion of Order over Chaos, and Shaushka, a Hurrian variant of Ishtar/Asherah.

Inside that temple are the giant carved footprints;

curiously coincidental one finds an example of a carved hand in association with an inscription dedicated to YHWH and Asherah; 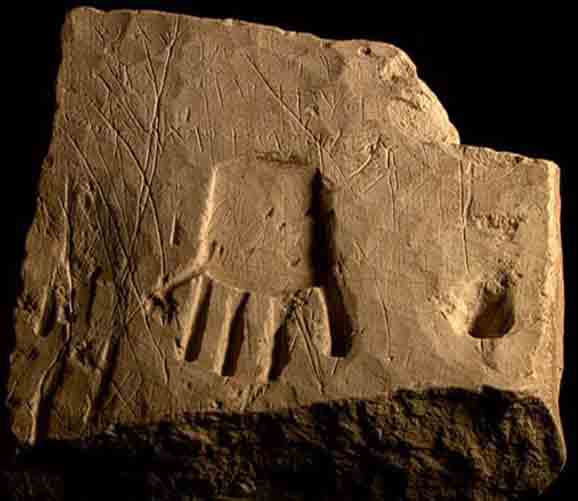 Extended as if in blessing, a hand reaches out from an inscription that reads “Blessed will be Ariyahu to Yahweh and his Asherah.” Found in a tomb at Khirbet el-Kom, near Hebron, the inscription provides yet more evidence that the ancient Israelites believed their god Yahweh to have a consort. Ariyahu may have been a priest of Yahweh: It was common for the temple priests to incorporate a form of the name Yahweh into their own name


So all in all sadly no Ark of God, but the Ark of the Goddess Asherah, she who must be ignored...

Isn't there a Jewish Cult in Ethiopia that claims physical possession of the supposed actual Ark of the Covenant?

Yes, they claim it was taken to Ethiopia at the time of Solomon and Sheba, but it's a very sketchy claim.


Another interesting angle to the Asherah 'Arks' is that as i mentioned an identifying motif is the sign for Nin/Lady that dates back to Sumeria. As it happens the basis for the Sumerian flood 'Ark' was a reed birthing house which was sacred to Inanna, seen here when the flood is predicted and the hero has to convert the reed house into a vessel; 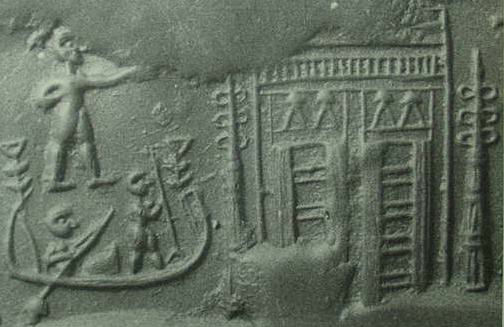 There was an obvious reason for making the reed house into an ark of salvation, in that animals went in two by two and multiplied, it was a breeding/birthing centre, and carried the cultic motif of the Goddess of sexuality;

They still make them in the marsh regions of Iraq, and they are the undoubted model for the Sumerian flood ark, thus an Ark with an architectural counterpart had a very long history in the region. 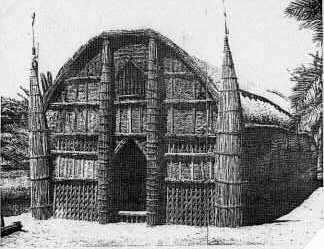 Ark of the Covenant in Axum


Hi there kantzveldt,
Another interesting and thought provoking post,
So, He, whose name must not be spoken , has a consort. Didn't know that,

posted on Mar, 25 2013 @ 05:48 PM
link
oh man....talk about spectacular subject matter. The OP consistently has outstanding posts. This is no exception.

I will be back after I have had a chance to read it all tnoight, and hopefully offer more salient input.

they are typical funerary equipment.
similar to a false door, which was central to funerary rituals and offerings

this particular type doorway would consist of a statue of the deceased
probably representing his ka.


its funerary development, evolving from egypt

indicating this could be ancient... ie over 2000 yrs


well, they have to BELIEVE that something important is there. And belief is what the whole thing is really all about in the first place.

Originally posted by Aleister
reply to post by thePharaoh

I am quite old now but when I was a youngster I was taught that it is foolish for people to look for the Ark of the covenant simply because they will never find it. The prophet Jeremiah has said, according to scripture, that it has been done away with. What is your opinion?


Originally posted by Aleister
reply to post by thePharaoh

True. So true. And behold, the Pharaoh has arisen!

posted on Mar, 25 2013 @ 08:22 PM
link
The "whereabouts story" that I think is most likely, is that the templars hid it on Oak Island, and since then it has been retrieved by God. I can't remember all the exact details, but supposedly, two young guys saw lights over the moneypit, and that is how they found the moneypit to begin with.

There's all kinds of stories about the moneypit on oak island, and if you tie them all together with all the ark of the convent stories, you should get the story I just mentioned above. Sorry about no links...it's been awhile since I read all the different stuff.


Seven beams across, 4 levels in.

Or maybe a portable, personal, cooking slash heater slash lighting fixture. Its blackened inside like my fireplace too. During the day you could transport coals for use the next night. Weary travelers who are too tired to make fire everywhere they go. Maybe the broken off bits at the top were to pick it up an move it while hot? Dunno...

This one looks like a personal space heater. Fill it with hot coals and heat a room, maybe? Slowly feed a length of wood into the lower hole to keep up the heat? H

Nights were long, right? Without TV and other entertainment these ornamental, warm and glowing "night lights" would ease back the darkness and cold just a little bit?

posted on Mar, 25 2013 @ 10:23 PM
link
Fascinating OP.
SnF
There are several that feel that the Ark is actually beneath Golgotha. When Christ died, an earth quake caused a crack that goes down to a cave system connected to Solomon's mines. In that chamber, directly below skull hill, is where the Ark is supposed to lie. The crack in the roof of the chamber, is just above the Ark, which, when is lying on the ground, is called "The Judgement Seat." This stone covering that makes up the seat is cracked as well.
edit on 25-3-2013 by Violater1 because: (no reason given)


It is in Axum, Ethiopia. It is not a Jewish Cult. They are Ethiopian Orthodox Christians. Whether or not it is truly there is subject to debate.


Great Stuff. Just out of curiosity, what are the test results of the residue contained
in those objects?
If there is such data, is there a correlation between these objects?
Great Work.
S&F to You