Today I bring you a topic I find endlessly fascinating: death. To be more specific, I bring you a brief overview concerning the funerary practices of different cultures and civilizations, from the ancient to the modern.

Obviously, attempting to discuss such a broad topic spanning from the beginning of human history to today is beyond the scope of this thread. Therefore, I’ll bring the highlights only and provide those interested with sources for further research.

Now, you’re probably asking yourself….why would anyone find death fascinating? Well, its hard to explain. All my life I’ve contemplated death and what comes after….my parents tell stories of how I, at the age of five and six, would beg to go to the local cemetaries and walk among the tombstones. I still do this today; I like to think about those who rest beneath and the life they had. That may sound morbid to a lot of people, but to me….its peaceful. For the record, I am NOT interested in the process of dying, but the state of being dead.

So, to the topic at hand. Let’s start by defining exactly what funerary services are:


Funeral rites are as old as the human race itself. Every culture and civilization has attended to the proper care of their dead. Every human culture ever studied has three common threads for death and the disposition of their dead:
1) Some type of ceremony, funeral rite, or ritual
2) A sacred place for the dead
3) Memorials for the dead

Now that we’ve identified common attributes of funeral rites, lets examine the history of such rites.

Did Neanderthals Bury Their Dead?

Between the years of 1951 and 1960, Dr.Ralph Solecki discovered and investigated a series of Neanderthal bodies discovered in Shanidar Cave in Iraq. Dated to 60,000-80,000 BC, the find seemed to indicate to Dr. Solecki that the Neanderthal did, in fact, intentionally bury their dead


The excavated area produced nine skeletons of Neanderthals of varying ages and states of preservation and completeness (labelled Shanidar I - IX, or Shanidar 1 - 9). The tenth individual was recently discovered by M. Zeder during examination of a faunal assemblage from the site at the Smithsonian Institution. The remains seemed to Zeder to suggest that Neandertals had funeral ceremonies, burying their dead with flowers, and that they took care of injured individuals. One skeleton and casts of the others at the Smithsonian Institution are all that is left of the findings, the originals having been dispersed in Iraq.

There are historians who doubt that the “flower burial” was intentional; they argue the amount of flower pollen could have been the result of small rodents known to store flowers underground.

The Red Lady of Paviland

The Red Lady of Paviland is a fairly complete Upper Paleolithic-era human male skeleton dyed in red ochre. Discovered in 1823, it is the first human fossil to have been found anywhere in the world, and at 33,000 years old is still the oldest ceremonial burial of a modern human ever discovered anywhere in Western Europe. The bones were discovered between 18 and 25 January 1823 by Rev. William Buckland, during an archaeological dig at Goat's Hole Cave; one of the limestone caves between Port Eynon and Rhossili, on the Gower Peninsula, south Wales. 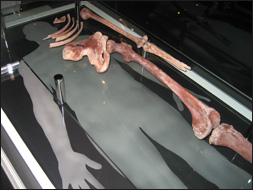 A dolmen, also known as a portal tomb, portal grave, or quoit, is a type of single-chamber megalithic tomb, usually consisting of three or more upright stones supporting a large flat horizontal capstone (table), although there are also more complex variants. Most date from the early Neolithic period (4000 to 3000 BC). Dolmens were usually covered with earth or smaller stones to form a barrow, though in many cases that covering has weathered away, leaving only the stone "skeleton" of the burial mound intact. 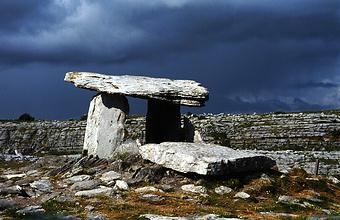 Of course, we can’t examine funeral rites without a quick look into the Egyptian funerary practices. I’ll keep this brief, as most of us are already familiar with Egyptian embalming. For further reading, I recommend the links below.


Beliefs about the transition from the mortal world to eternal life were recorded throughout the more than three thousand years of ancient Egypt's history, though new ideas were incorporated from time to time. Most important for full participation in the afterlife was the need for an individual's identity to be preserved. Consequently, the body had to remain intact and receive regular offerings of food and drink.

The final step in the transition to the afterlife was the judgment in the Hall of Maat (the god of justice) by Horus (the god of the sky) and Thoth (scribe of the dead) by comparing ab (the conscience) and a feather. The ritual was known as the Weighing of the Heart. Heavy hearts were swallowed by a creature with a crocodile head who was called the Devourer of Souls. The good people were led to the Happy Fields, where they joined Osiris, god of the underworld. Many spells and rituals were designed to ensure a favorable judgment and were written in the papyrus or linen "Book of the Dead."

All ancient Egyptians believed in the afterlife and spent their lives preparing for it. Pharaohs built the finest tombs, collected the most elaborate funerary equipment, and were mummified in the most expensive way. Others were able to provide for their afterlives according to their earthly means. Regardless of their wealth, however, they all expected the afterlife to be an idealized version of their earthly existence.

If you are interested in Egyptian history, I highly recommend Wilbur Smith’s novel River God and its sequel, Warlock. Its fictional, but offers a lot of great historical information. 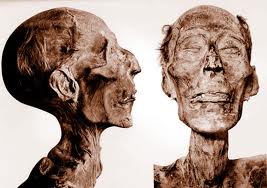 If I ever get the chance, I would dearly love to visit the Catacombs. I’ve actually had dreams about them, exploring the dark tunnels. Why? No idea, maybe it came from watching Indiana Jones and the Last Crusade.


To find catacombs, go to Rome, home of some of the oldest and longest burial underground tunnels in the world. "Hundreds of kilometers of catacombs run underneath the town and its outskirts," says Adriano Morabito, president of the association Roma Sotterranea (Underground Rome). "Some of the networks are well known and open to visitors, while others are still scarcely explored. Probably there are a number of lost catacombs, too."

The oldest tunnels date back to the first century. "The Jewish community in Rome built them as cemeteries. Christian catacombs came a century later. They were not secret meeting places to survive persecutions, as historians thought in the past, but burial tunnels, like the Jewish ones," Morabito explains. "They used to grow larger and larger around the tombs of saints because people asked to be buried near their religious leaders." 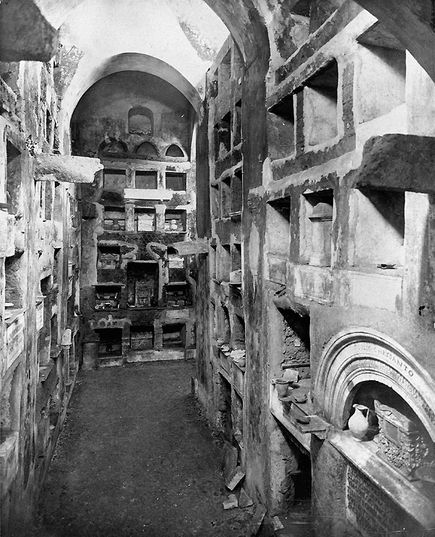 Continued in next post
edit on 24-3-2013 by smyleegrl because: (no reason given)

Latin for “remember that you will die,” a Memento Mori is a piece of artwork or other item used to focus one’s attention on the reality of death. Perhaps the most famous of the countless Memento Mori is the Cadaver Tomb.

The Cadaver Tomb was a piece of artwork showing the deceased as a decaying corpse. Many times, the corpse was little more than skin stretched tightly over bones, often with maggots or other critters present. In some cadaver tombs, the display was double-layered, with a sculpture of what the person looked like in life on top, the decaying corpse sculpture underneath. 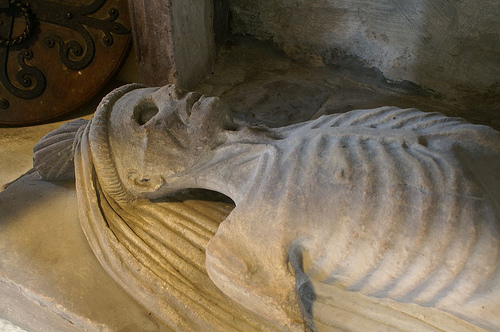 In Victorian times, a corpse was rarely safe. Medical schools, denied access to corpses for study, often employed “Resurrection Men” to dig up the recently deceased and carry them to the medical schools for dissection.

In addition to the Resurrection Men, another custom commonly practiced during Victorian times was the photographing of the dead.

These photos often included living relatives posed with the recently deceased. Particularly poignant are the photographs of mothers holding dead children, or siblings sitting with a deceased brother or sister. I won’t post any of the photos, but here is a link to some photos if you’re interested.

Not for the squeamish.

Modern-day embalming had its beginnings with the advent of the Civil War. Although most soldiers were buried were they fell, officers and the relatives of the wealthy were often shipped back home for burial.


Even though the public was familiar with embalming, [soldiers being sent home embalmed and President Lincoln and other notables having been embalmed], the general public did not take to this new invasion of the body. There were many bodies embalmed after the Civil War, but it was not until the beginning of the Twentieth Century that embalming became an accepted practice. It was at first performed in the home by the undertaker. By the early to mid 1920s the funeral home as we know it was beginning to emerge.

I won’t post it here, but if you’re interested in reading up on the steps involved in embalming, you can find the information here.

So there you have it, ATS. A brief overview of funeral practices from the Paleolithic period to now. I hope you enjoyed it, or at least didn’t freak out too much.

Woops, sorry I didn't read the 'Continue in next post" I withdraw my last statement and now choose option: Memento Mori - But I'd have ti in a public place, even better I would make sure my kids keep it to freak out their guests


Yes, and I didn't even mention any of the Eastern history, which is just as fascinating.

You could compile all the information in a dozen books and still only scratch the surface.

What creeps my out is taking pictures of the dead.
My wife's grandma insisted on taking a picture of her dad in the casket.Eventually someone did it for and later ,when I went to help with something,she pulled the pictures out,showing them to me.
Really,grandma??

posted on Mar, 24 2013 @ 03:46 PM
link
My favorite would be the funeral towers of the zarathustians. This was the religion that started with the one-god thingie and stuff. They got copied a lot by the abrahamic religions. But, they did not copy the way they treated the dead. Imagine a stone-tower with metal-gratings on top of it. They let the birds feed on their dead, and the skeleton would fall to the bottom of the pits.


that is akin to the tibetan way of doing it, where they just put the bodies (sometimes dismembered for each of carrying and disposal) out for the birds to eat.

In India they do something similar by putting the bodies to float on the Ganges, or some other such ritual Most Indians find our Bald Eagle to be disgusting, not regal, because of this.


The funny thing about the Indian practice of disposing of bodies in the rivers, is that it has led to an evolution in bull shark behavior. Bull sharks can now be found several hundred miles inland on the major rivers.