Astronomers have traced the origin of a meteor that injured about 1,000 people after breaking up over central Russia earlier this month.

Using amateur video footage, they were able to plot the meteor's trajectory through Earth's atmosphere and then reconstruct its orbit around the Sun.

As the space rock burned up over the city of Chelyabinsk, the shockwave blew out windows and rocked buildings.

The team, from Colombia, has published details on the Arxiv website.

Numerous videos of the fireball were taken with camera phones, CCTV and car-dashboard cameras and subsequently shared widely on the web. Furthermore, traffic camera footage of the fireball had precise time and date stamps.

Early estimates of the meteor's mass put it at ten tonnes; US space agency Nasa later estimated it to be between 7,000 and 10,000 tonnes. Nasa estimates the size of the object was about 17m (55ft). 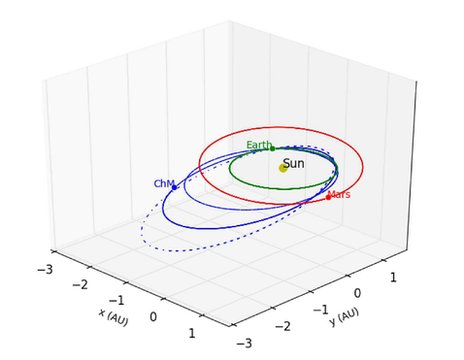 In February 15 2013 a medium-sized meteoroid impacted the atmosphere in the region of Chelyabinsk, Russia. After its entrance to the atmosphere and after travel by several hun- dred of kilometers the body exploded in a powerful event responsible for physical damages and injured people spread over a region enclosing several large cities. We present in this letter the results of a preliminary reconstruction of the orbit of the Chelyabinsk meteoroid. Using evidence gathered by one camera at the Revolution Square in the city of Chelyabinsk and other videos recorded by witnesses in the close city of Korkino, we calculate the trajectory of the body in the atmosphere and use it to reconstruct the orbit in space of the meteoroid previous to the violent encounter with our planet. In order to account for the uncertainties implicit in the determination of the trajectory of the body in the atmosphere, we use Monte Carlo methods to calculate the most probable orbital parameters. We use this result to classify the meteoroid among the near Earth asteroid families finding that the parent body belonged to the Apollo asteroids. Although semimajor axis and inclination of the preliminary orbit computed by us are uncertain, the rest of orbital elements are well constrained in this preliminary reconstruction.

So it looks like there are quite a lot more out there where that one came from. I wonder how long until the next big impact?


Outstanding! I don't know why I am saying that, just awed at the spectacle of it.

posted on Feb, 26 2013 @ 11:26 AM
link
Ahhh.. The Apollo asteroids. Isn't Apollo supposed to be guarding the gates of hell Well I suppose it did create a hell of a lot of stir Hopefully Apollo keeps those gates closed in the future.

posted on Feb, 26 2013 @ 11:31 AM
link
I just commented in another thread, well posed a question that I will repeat here, are we going through a debris field, or are we in a cosmic game of billiards? I'm gonna go with billiards, BUT, Now I pose a new question, What was it that made it scratch on trying to put the 8 ball in the corner pocket, and are there anymore coming? Sorry, but a good analogy. Hopefully we won't lose the game.

posted on Feb, 26 2013 @ 11:37 AM
link
phhewww, i thought the report was going to suggest the asteroid came from the arachnid quarantine system (Starship troopers reference).

In all seriousness, the galaxy is a dangerous place and as a result of these back tracking efforts we can see the potential for future danger and just been verified even further.

If one positive development from this situation has come to fruition, it is the increased in monitoring we have already sent up into orbit.

Originally posted by MDDoxs
phhewww, i thought the report was going to suggest the asteroid came from the arachnid quarantine system (Starship troopers reference).

Originally posted by PhoenixOD
Early estimates of the meteor's mass put it at ten tonnes; US space agency Nasa later estimated it to be between 7,000 and 10,000 tonnes. Nasa estimates the size of the object was about 17m (55ft).


How can it weigh that much but only be 55 ft in size? Must be extremely dense rock ... unless that weight is incorrect.


Come on Phage!!! You could at least wait a day or two .... you just killed a conspiracy baby in it's early days of development


If this meteor was of an orbiting meteorite belt, wouldn't it mean that it had magnetic orientation to follow the orbit? Many rocks here on earth are magnetically oriented because the atoms lined up with the magnetic field over millions of years. I could be using the wrong wording.

No such thing as a meteorite belt, unless you mean something like this:


If this meteor was of an orbiting meteorite belt, wouldn't it mean that it had magnetic orientation to follow the orbit?

Magnetism doesn't have anything to do with an orbit.

Many rocks here on earth are magnetically oriented because the atoms lined up with the magnetic field over millions of years.

Not exactly. The magnetic orientation of lava fields occurs when the lava solidifies from its molten state. It doesn't take millions of years.

Originally posted by rickymouse
reply to post by Phage


If this meteor was of an orbiting meteorite belt, wouldn't it mean that it had magnetic orientation to follow the orbit? Many rocks here on earth are magnetically oriented because the atoms lined up with the magnetic field over millions of years. I could be using the wrong wording.


Any asteroid is in a potentially dynamic situation, just like most everything else, and all things play a part.


The whole solar system is a debris field to all intents and purposes, and yes you could say we are in a "cosmic game of billiards". That is the way it is, and always has been. So yes again, there are more coming all the time.

Having said all of that, the fact that we are all here is proof that it's very unlikely we will suffer an impact on a global scale in our life time, or even a few lifetimes. Smaller asteroids the size of the one this thread is discussing don't come along very often, so whilst it's possible we will get another one, it's also unlikely. As asteroids get larger, they become even more rare and few between. Also the bigger they are, the easier they are to spot, and we have spotted an estimated 95% of these, so although they might be dangerous to us if they hit, we know that it's extremely unlikely we'll get hit by one of these.

That only leaves objects around the size of the one being discussed in this thread that could be potentially dangerous, but as we saw with the Russian event, these are not likely to cause serious damage or injury... and they are not common at all compared to the size range of rocks which hit us on a daily/weekly/monthly/yearly basis, so as I said before, it's likely the last one we will hear about in our lifetimes.

We will continue to hear about smaller meteorite dropping fireballs though, as these are common, but apart from shaking people up a little every once in a while, they are basically harmless. In fact they do us a lot of good if anything by dropping meteorites on the ground and giving us clues about how to defend ourselves against the really dangerous objects out there.

I highly recommend watching this documentary on the subject:


Either way, don't loose any sleep over it - I certainly don't. There is more chance of having a car crash, falling down the stairs and breaking your neck, or being hit by a plane falling out of the sky than there is of being injured or killed by a space rock. We have our atmosphere to thank for that, and it's very effective at stopping quite large rocks that would otherwise be a real danger to us.

Instead, go out and enjoy the free show in the sky. There's a new episode every night, and practically guaranteed drama if you are patient enough. Seeing re-runs on the PC/TV doesn't hold a candle to seeing a bright meteor/fireball with your own eyes, as I'm sure all others who have also seen them will agree. Most events don't get recorded, so there are no re-runs, and most people don't know what they are missing or they would spend a lot more time observing IMHO.
edit on 26-2-2013 by FireballStorm because: clarification

Originally posted by Phage
reply to post by Ryanssuperman

The more you know Thanks for clarifying Phage.

posted on Feb, 27 2013 @ 11:54 AM
link
I am by no means an expert on the universe in general. I do however have an odd sense that we popped our collective heads up into the line of fire with the galactic alignment in December. No facts to back it up, just a feeling.

"From a distance, large asteroids look like big rocks. However, many show, by their low density, that they contain either much empty space or something light, such as water ice.2 Also, the best close-up pictures of an asteroid show millions of smaller rocks on its surface. Therefore, asteroids are flying rock piles held together by gravity. Ida, about 35 miles long, does not have enough gravity to squeeze itself into a spherical shape."

If all the bigger asteroids like this all have icy cores, then we can predict any of them entering our atmosphere will break apart, pancake against their own shock waves, and explode in the atmosphere.