posted on Feb, 17 2013 @ 11:04 PM
link
The website Traditioncatholic www.traditioninaction.org... has posted sometime ago a text claimed to be the 3rd secret of Fatima (or part of it). It claimed to be the real vision of the children instead of the officially released one in 2000. It seems to me it is also not the authentic one. As well as the official one is not authentic, that is evident for everyone who studies Fatima. Moreover, here we are talking of a vision, given in another apparition, not of words of Our Lady given in July 13, 1917 apparition. The words of Our Lady that were part of the Third Secret following immediately the text of the Second Secret, embedded within it, and ending with the known ending phrase "My Immaculate Heart will triumph" have never been released officially. Perhaps Neues Europa text is a good portion of them.

Anyway, this one is claiming handwritten document from Lucia in 1941 similar at first look to the official one. So here it is at your review. If it is fake, I hope those responsible who hold the real documents will release them NOW around the conclave. Not to release or fulfill heavenly demand for a century seems to me a serious trespass on the conscience of not few popes and cardinals. What is it they are hiding from us? Extraterrestrials? Whatever it is, they do not have permission from heaven to continue lying us. Especially ina dramatic year as 2013 with the election of the last roman catholic pope.

Here is the alleged text:
www.traditioninaction.org...

Now I am going to reveal the third fragment of the secret: This part is the apostasy in the Church!

Our Lady showed us the individual who I describe as the 'holy Father' in front of a multitude that was cheering him.

But there was a difference from a true holy Father, his devilish gaze, this one had the gaze of evil.

Then, after some moments we saw the same Pope entering a Church, but this Church was the Church of hell; there is no way to describe the ugliness of that place. It looked like a gray cement fortress with broken angles and windows similar to eyes; it had a beak in the roof of the building.

Next, we raised our eyes to Our Lady who said to us: You saw the apostasy in the Church; this letter can be opened by the holy Father, but it must be announced after Pius XII and before 1960.

In the kingdom of John Paul II the cornerstone of Peter’s grave must be removed and transferred to Fatima.

Because the dogma of the faith is not conserved in Rome, its authority will be removed and delivered to Fatima.

The cathedral of Rome must be destroyed and a new one built in Fatima.

If 69 weeks after this order is announced, Rome continues its abomination, the city will be destroyed.

and here you can find a collection of videos as well as recent comments....


Too bad he cannot tell us word for word what the third secret reveals.

Why the secrets? If anyone knows, we should all know.

This is why I do not like the Vatican. They hold secrets they believe only certain people are privy to.

I can get idea of what he is getting at though and what he believes may happen.

posted on Feb, 17 2013 @ 11:45 PM
link
I don't mean to drail the thread or anything...but good luck getting a lot of feed back on this thread...
Ever since the the abused children scandel came out....Everytime I hear news about the Pope or Vatican...Poor Ms. O'Connor comes to mind....I always thought her fall from Grace was wrong...


Yeah? I liked the song, just never really connected with her as an artist.

I do like this subject, there is always hope more will chime in on the third secret.

Its becoming a pattern OP.... I see a pattern as of late.

Am I intuitive, is the force of nature trying to tell me something? A lot of synchronicity lately.

My son has me liking this song below.

I have been studying climate, Sun, and Earthquakes for the last two years. Came to ATS and realized my cool little cozy world was not what it seemed. Is Ignorance bliss or what?

I've studied religion and philosophy for 20 years. I wonder and think deeply about the spiritual side of the human being and wonder how so many can be oblivious to their own soul and spirit. It puzzles me and I love solving mysteries and puzzles. These patterns I see have to do with prophecies and what I know to be happening as much as some will deny it. Things are changing and it's not just my imagination, it's for real.

I want to know everything, it's just who I am. I look for answers if I don't know them. I like learning. This learning has lead me to places I didn't know existed.

I tell my kids that if they do not change their self, I will change them for them. This is told by me to them when they are acting in a defiant way or disrespecting me... possibly doing bad in school. I'm their teacher.

The force of nature is our teacher. We learn from those around us and by making choices with our free will. Each of us have our own governing nature.

Nature has a way of correcting herself.

We are a nuisance to her. We are not helping our brother anymore, we are warring with him consistently and causing nature to get off course. This cannot happen.

The third secret is and will one day come true? The video above from the other poster states what sooooo many have stated.

Something will happen to our Sun/Son. It will be a reset. This will bring about a new age when people will live in harmony again and appreciate the land and the Sun that gives us life.

Is this why the Pope resigned? Did he already know he was going to resign to have another Pope come in who was prophesied to?

If (big IF) Peter is called again, my eyes will bug out and I will begin a bug out bag. No joke. Im laughing out loud though. Its the craziest thing that could happen but... it could happen.

The Sun will go into an erratic behavior and shoot off a flare that has never before been seen.... or so says LOTS and LOTS of prophecies.

The best way I can tell, research the Sun. Everything there is to know about the Sun. If you find credibility... prepare.

Noah was said to have prepared an ark. He listened and took heed to the red flags and or warning signs. I want to as well.

posted on Feb, 18 2013 @ 04:09 AM
link
pope Benedict is currently in spiritual retreat for 1 week. Why so, if he will have abundant time for retreats once he leaves? I guess, he prepares for a major unannounced event between Sunday 24 Feb and Feb 28. It could be on Sunday Angelus, or it could be on his last public audience on Feb 27 when thousands are expected to attend.

What will that event be? Announcement of the real Fatima together with "mea culpa", or another no less important act as a pope? Let say new Marian dogma? Or to tell the people: you know what, half of the angels are actually Et and we have good communication with them...just speculation.

posted on Feb, 18 2013 @ 05:04 AM
link
Just a suggestion, together with the so many others, for what we ultimately don't know of secrets and prophecies...

Will pope Benedict announce on his last public audience on St Peter square on Feb 27 the...coming angelic extraterrestrial rescue/rapture from Earth, before...mega cataclysm with the solar system/solar explosion as shown in Fatima? I know this is a wide speculation, but what if Our Lady's words do not only consider earthly problems, but also those that will happen with the Sun as shown in the Falling Sun towards the Earth in Fatima 1917?

I keep the pope in my prayers, as well as his successor. May God give them the necessary courage, and may it happens finally - whatever is it in those secrets told by the most holy Virgin Mary!

One of our readers from Portugal sent us the facsimile of a handwritten text that could be the text of the Third Secret of Fatima. This unsigned text supposedly was written by Sister Lucy in her Convent of Tuy on September 1, 1944 or April 1, 1944 - it is not clear whether the number indicating the month is 9 or 4. A fingerprint of Sister Lucy was placed on the bottom of the page as a guarantee of its authenticity. Some unidentified person who had access to this document released a photo of it very recently.


The above is from the OP'ers source....the emphasises are mine.

It's a bit vague really isn't it?


It is a bit vague. It wouldn't be vague if it were not a "secret". The third secret has been leaked though and we can all go through prophecies (ancient ones and new ones) to find the pattern.

Man could alter the future if he changed his course. I don't see this happening though... its only getting worse.

It has to do with the Sun/Son. 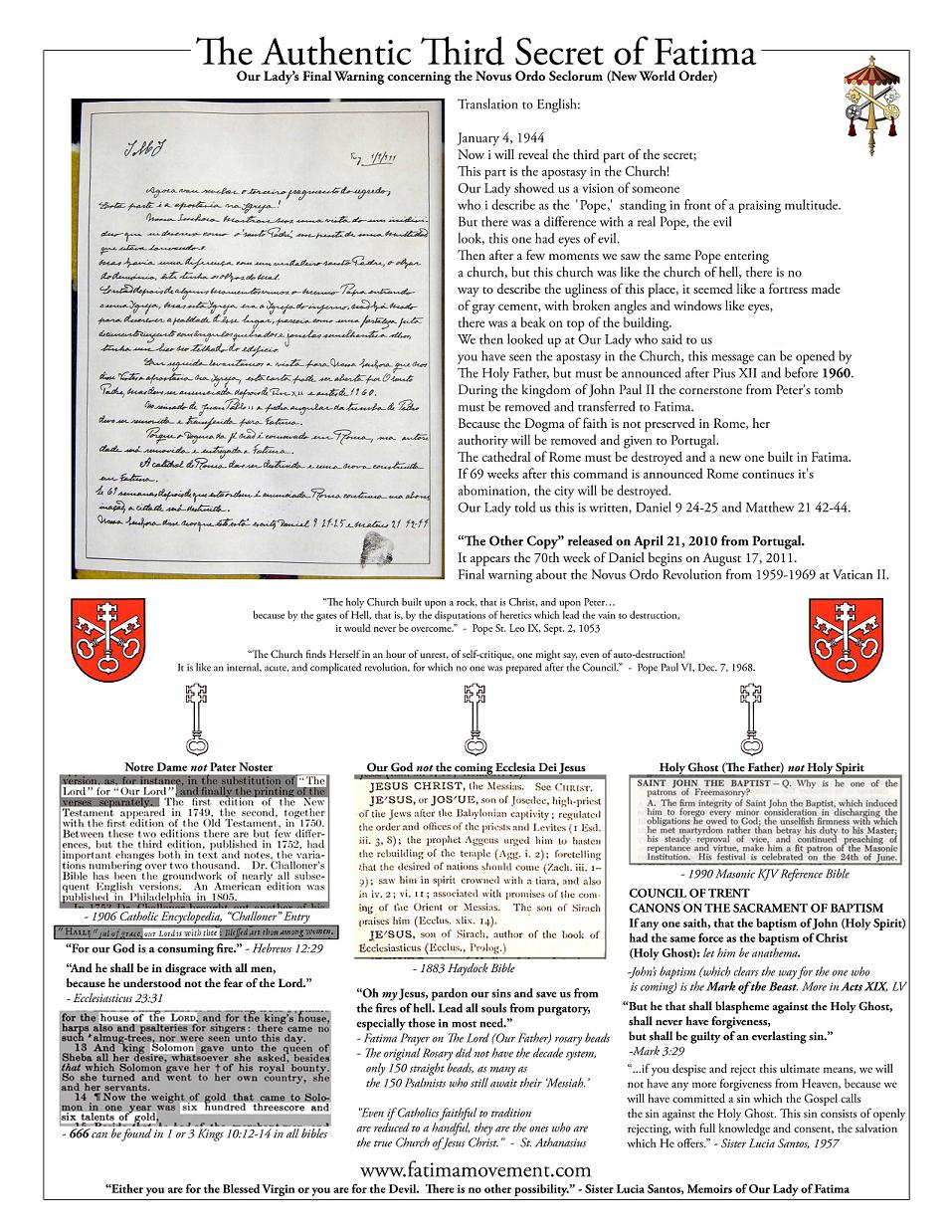 I remember the alleged apparition in Bayside as saying: "Consecrate Russia or you will die". Without taking position on Bayside, that seems to be the case with Akita as well, that is approved apparition "fire from heaven/sky"

How easy is for the pope to use his best intranet satellite connection to each bishop around the world and to require Immediate and precise consecration of Russia! Even in this last week of his papacy.

This should be task N1 of the new pope. I hope he reads what the public opinion is on these topics.


Here is one good song of one of the best Russian child singer Ivailo pop group Neposedi. Let those responsible think of what they lose to say a prayer, and what they win! There won't be much more chance once Petrus Romanus is elected. All know that, even the non-catholics, even the atheists.

posted on Feb, 18 2013 @ 01:23 PM
link
I suggest there might be a meteorite similar to that fallen in Russia last week. If such falls on Rome or nearby, the total energy is 400kt. It might be bigger this time. The Russians could probably intercept it, despite of contradicting reports. Who wil intercept it in Rome? How about man made attack? Here come Anguera messages that are the most informative ones, should we accept them as true.

Our Lady in Anguera, Bahia, Brazil

Dear Sons and Daughters, a war will explode on Rome and there will be few survivors. He who is against Christ will bring suffering and sorrow to all Europe. The throne of Peter will be empty. Tears of pain and weeping of lamentations will be seen in the Church.