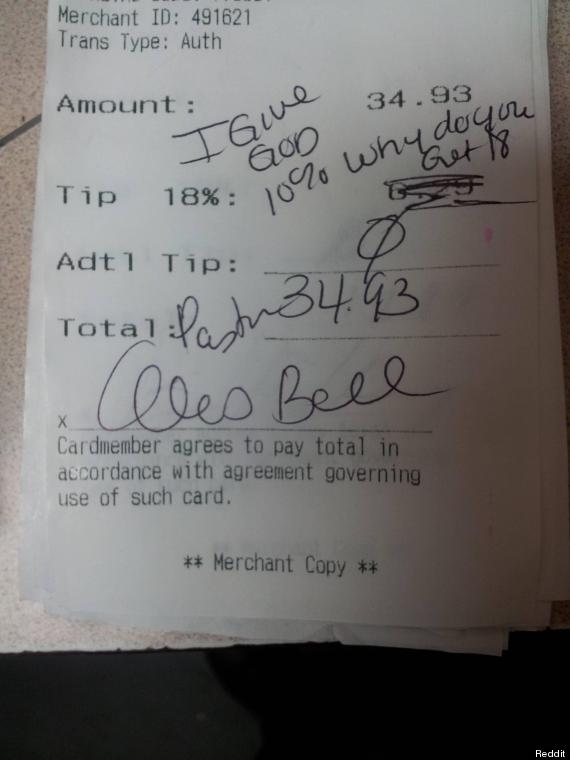 
“I thought the note was insulting, but it was also comical," the waitress, whose name is Chelsea, told Consumerist. "I posted it to Reddit because I thought other users would find it entertaining."

Apparently once the receipt hit the Internet, the supposed pastor forgot the Golden Rule of “love thy neighbor” and called the Applebee’s where Chelsea works to demand that she and all management involved be fired.

And she was fired. A bit extreme imo.


The pastor is not the first to write an excuse on a receipt to get out a hefty tip on a bill. A single mom recently opted out of a tip on a restaurant bill for close to $140 by simply writing, “single mom sorry.” Another Applebee’s customer in Edison, NJ, wrote “stop eating bitch!” on the receipt rather than leave some gratuity for his server.

posted on Feb, 1 2013 @ 12:27 PM
link
I reckon he was trying to say that if god only gets 10% then who is she to think that she is better than god and deserves 18%.
people like him who worship money give all christians a bad reputation.

yeah, that's probably what he was trying to say but God doesn't get 10%. A human minister does. Sorry, but Christians already have a bad reputation.
edit on 1-2-2013 by lupodigubbio because: (no reason given)


One of the first responses (trolling aside) will probably be: "That pastor's behavior in no way reflects the views, opinions, or lifestyles of Christianity/Catholicism in general. He's a fruitcake, let him hang himself, not us."

But see, this pastor's behavior is a mentality reflected to various degrees by many churches and churchgoers all across America. They act as though their poop doesn't smell because to admit anything else is to confront the big bad world that they live in. A lot of times, religion only serves as Valum for people who find themselves unable to deal with the possibility that perhaps the human race has evolved into monsters.

That's not the case with everyone though. Still, I think that pastor is yet another "false prophet" who wouldn't recognize compassion and understanding unless it smacked him in the face with a benjamin. I think everyone can agree when I say that those kind of religious folk give spirituality a bad name.

Out of curiosity, reverends in my state are tax exempt. Are "representatives of the Lawd" tax exempt in his state?
edit on 1-2-2013 by AfterInfinity because: (no reason given)

Anyway I do not believe in paying gratuity tax. I do not see why, we the actual paying customers need to make up for a companies crappy wages.


this guys an idiot, if he ever went to church he would know the church teaches that god is in everyone so according to the churches logic the waitress should also get 10 percent not zero percent.

in the end i think this girl is just a cheap a$$hole
edit on 1-2-2013 by DocHolidaze because: (no reason given)


Sometimes I wish religion was true and hell really did exist...

He does realize, right, that wit tip share, he just cost that waitress money Out Of Her Pocket... Not just omitting his money right? She literally just had to come out of her pocket for his meal. Where is the godliness?

You don't want to tip? Don't take your lazy ass to a restaurant and cook your own food.

I hope this pastor gets his ass kicked in for this type of stupidity.

And who wants to bet this guy has never donated 10% of anything to "god".

It's people like this that rightfully give religion a bad name.

I wish I lived near him, just to leave a note in his collection plate. You know, his communal tip jar...


Neopan100
+14 more
posted on Feb, 1 2013 @ 12:35 PM
link
when i worked food service..I made a rule to clearly look at each customer...if they were bad tippers or no tippers..I would remember them for the next time..let's just say they got less than stellar service the next time around...

One time this woman was a total biotch..left no tip..I consider myself friendly and easy going..so i don't know why people have to have such big attitudes..well anyway, a few months later my washer and dryer gave up all at once. I went to buy a new one..you know the really nice washer and dryer. Well guess who waited on me at the appliance store??? She did...but she didn't have a clue who I was..I struck up a very nice conversation..asked if she made commission on the sales..when she said she did..I abruptly interrupted her and said thank you..we WILL buy the washer and the dryer....she went to ring us up and fill out the paperwork for the warranties. When she started to ring up the w/d I told her a little story...then I asked for the other employee to ring it up..no commission for you! She looked like she could have strangled me.. I just laughed all the way out of the store...give it...take it...

Most wait staff will remember the a-holes..don't be an a-hole to the person that handles your food..

OtherSideOfTheCoin
+3 more
posted on Feb, 1 2013 @ 12:35 PM
link
I have never really understood tipping waitresses or taxi drivers, they are doing a job and providing a service and they get paid to do so, why should I pay them any more if they are already being paid.

Originally posted by OtherSideOfTheCoin
I have never really understood tipping waitresses or taxi drivers, they are doing a job and providing a service and they get paid to do so, why should I pay them any more if they are already being paid.


The real question should be, is god reporting this 10% to the IRS..?


If not, people should reconsider donating...

The pastor tithes 10% of her full-time job income to herself (church with 15 members) and most likely deducts that from her personal taxes. Sigh.

tips make the world go round, those servers make up a large work force all around the world, u put money in there pocket and they put that money into the economy. not to mention if a server knows the tips come steadily in the future you may just get a couple kick backs and special treatment. its almost like karma in money form


I just don’t understand why you give 10% because someone is doing the job they are paid for.

Makes no sense to me.

He was using his religion and position as an excuse to not "do unto others," which is truly disgusting and shows the man's character almost as much as having this poor girl fired, did.

I can understand the single mom and any other fellow human who cannot pay the tip. But what that beast had done is sadly, mind boggling atrocity even though a simple act. It is often the simple acts that define us humanity, not big heroic world changing stuff.

Because if we are incapable of even doing small things, how are we going to be capable, even within the realms of hope, to do big things that would progress and evolve our world?

Our Messiah once saw a poor widow giving only a few coins as tithe, while a rich man with all pomp and granduer, laid large sums to the synagouge. He then used this situation to teach his disciples that it will be difficult for a rich man to get to heaven.

While a rich man had generously given large sums as tithe, however, that was only a miniscle portion of his wealth, and worse, largely trumpeted and applauded.

But when the poor widow give those few coins, it was all she had, as contribution to the community, for our common Creator NEVER needed that money for Himself, but only for His children - us, to help us in shared social expenditure. It may be even her next few meals that she had selflessly given away, so that all may survive....

That beast had not heeded the true teachings of our Messiah, and should remove his collar and seek for redemption for his hypocrisy and misleading of fellow christians. Such a simple act, and he fail to live up to his faith.

Most in the service industry get low pay, and it is the tips that help supplement their income, to live and love just like any other fellow human born on Earth. The waitress can do without his tip, as there are many more samaritians out there, but that memory will be seared in her mind, of what the beast in collar had done.

posted on Feb, 1 2013 @ 12:46 PM
link
Knowing that there are inconsiderate people out there like this pastor, I always tip 25%; with one exception. The exception is when the tip is already included into the bill. In those cases, I pay the mandatory 18% and make sure to let the manager know that their tip inclusion policy just cost the server an extra 7% in gratuity.