posted on Jan, 26 2013 @ 04:44 PM
link
This ridiculous law is in the state of Massachusetts where the Black Mental Health Alliance of Massachusetts has released a Public Service Announcement warning citizens about the state’s penalties for sporting saggy pants.

I personally can't stand that look but this is crazy.


The announcement alerts baggy-pants wearers that sporting pants “hip-hop style” with your “underwear exposed” could result in fines of up to $300 or even land you behind bars.

“You still think it’s cool?” a cop asks. “It’s the law. Pull up your pants. Respect yourself.”

Evidently Massachusetts law bans ”open and gross lewd and lascivious behavior” and warns that such behavior can be punished by up to three years in state prison or two years in county jail.

At least with this being brought about by Black representatives, they can't be called racists or accused of harassment.

I have seen at various events in some places where the cops will demand that guys pull their pants up. Not fine them but order them to do it. Usually it's a black cop so I don't know if they don't like the image/message that these young black boys are sending out or if they just think it's not appropriate. Some of the gangs wear this type of attire so maybe they are trying to cut down on the stereotyping that some people have on young black people.

Yes, that style of clothing looks idiotic at it's best, indecent at it's worst, but not worthy of fines/jail time IMO.

Mamatus
+18 more
posted on Jan, 26 2013 @ 04:51 PM
link
GOOD! Now I just wish the rest of the world would do the same. Walking around showing your elders your ass is disrespectful. It blows my mind how many times I have had people show up for a job interview sagging. I refuse to hire people that "sag" their pants as it is indicative of a mentality. One I reserve for losers and thugs. Most of the girls I know don't like it either. They prefer to see a mans ass as it is shaped. Although I will admit it is a great way to hide a small penis or a flat ass....

I can't show you my penis (except in San Francisco) why can you show me your ass?


I'm from Massachusetts and I don't see this as a black issue at all. It's a teen issue.

As much as I'm personally disgusted by it, I'm more concerned about safety. I can see one of these kids having to move quickly to avoid oncoming cars, losing their pants down to their ankles, and getting hurt.

Should the law be able to force kids to cover their underwear? I don't think so. What would be the difference between exposing underwear above pants, and wearing pants made of the same fabric as the underwear? As long as these kids aren't baring bums, I don't think it could be considered illegal when people go around 90% naked at the beach. 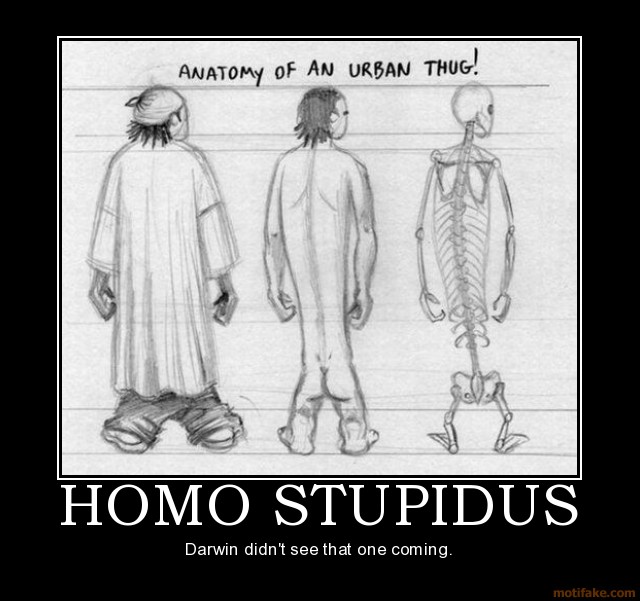 posted on Jan, 26 2013 @ 05:04 PM
link
What's shame. But it can go both ways really. It's been fun picking out those egotistical fools in society based on how they dress. Saggin' pants is one of them. I love how these people think they are so 'cool' when in reality they are really just living an illusion.
edit on 26-1-2013 by TheProphetMark because: (no reason given)

Originally posted by signalfire
Well, they'll be easy to catch considering there's no way to run with your pants down around your knees.

Hey, we have seen them run, or try to run from the cops and it's funny to watch. [COPS]
Here they are trying to haul azz while holding their pants up but they end up running spraddle legged.....
Needless to say they don't get far.........


No the law should not force them to hide their underwear. That should be up to a community. Wanna dress like a thug? Live in Thugville. But if you want to hang out in nice places with successful people pull the pants up!

Although I have to admit since it seems like communities are unable to regulate the sagging fools. When communities fail it is up to individuals. I contribute by refusing to hire them.

Many adults out there who do this already in public need to grow up and learn how to properly wear pants.

Despite their low intelligence level, its not hard to put a belt on.

posted on Jan, 26 2013 @ 05:21 PM
link
It's not the law that is so ridiculous but the fact they should need make such laws if you ask me.
This law should go national to tell you the truth.

Once ol baggy pants gets a better fitting pair of jeans it will free up one hand so they can get a job that requires two hands. Although it is very sad that big brother needs to tell us how to dress but face it it is out of hand why wear the pants at all.

I don't like seeing fat or ugly people walking around. Should all the fat and ugly people be sent to jail or fined?


Actually safety was the first thing I thought of when I read it as well. Here the latest thing is to accompany that look with unlaced work boots. Why? I dunno - I'm just a cranky old amphibian.

Anyway, I was at the local Lowes a few days ago and a young man was dressed as described above. He was with his mom. That likely took away from whatever thug-like image he wanted to project. As I was walking by I heard his mom say, "Oh we forgot..." Evidently the kid knew what it was they had forgotten because he said, "I'll get it!!!"

With that he wheeled around and started to dash off!! Except he ran right out of his unlaced boot, got his foot tangled in his now dragging pant leg, which pulled his pants down and caused him to do a face first header to the floor right in the middle of Lowes.

I'm not sure if that was the image he wanted to project when he dressed that way.. His mom did manage to ask if he was ok before she burst out laughing.

300 dollars to the STATE makes the state whole again when the pants are dropped below the belt-line. The STATE suffers damages to the tune of 300 dollars. Does the STATE have to define what, where, or how those damages are derived? Why 300?

Does this make sense?

Oh, wait. Screw me, I just realized, the STATE determined long ago, not unlike the plantation owners of the south, that the ONLY way to change behavior is to fine, beat, or imprison the slaves, since "beating" is now passe, the state must utilize the other two in order to force all to conform. Though, seriously, wouldn't it make more sense to lash each offending individual with 20 lashes in a public square?

BTW, it was the STATE, yes, the STATE that caused the problem in the first place!!!!!!!!!!!! "It" did so by incarcerating people in once size fits all clothing, so those who were let out of prison simply continued the STATE'S own clothing mandate of PRISON-BAGGY-PANTS!!!!!!!!

As an aside, I hate the baggy pants, it "offends" me, I am the one who's eyes are damaged to the tune of 300 dollars, but for some inexplicable reason I can't seem to get ahead of the STATE to collect my damages.

In all seriousness, when are people going to stop accepting economic punishment as way to change behavior? The STATE seems to get rich by defining everything anyone can do as a crime, yet, the same said STATE has the most horrendous educational system on the planet, oh, wait, it seems the STATE educates, or rather mis-educates, then fines the folks for the behavior they learned at the STATE institutions - what F*&*^&% racket!

Because it was fashion. It may be stupid, but now we have government telling us how to dress???

posted on Jan, 26 2013 @ 05:35 PM
link
Being 47 years old I have seen a pretty full range of fashion come and go. Bell bottoms, skinny jeans, Levi's and hot pants (still miss those) never showed ones undergarments. There was also a time when emulating someone of color was an ass-kickable offense. Now it is a form of flattery.

I saw MTV go live. Anyone remember the first song? It was the Bugles, "Video Killed the Radio Star". Damn prophetic that was. Now we got little white boys dressing like thugs, thumping subs and driving lowered cars. Nothing funnier than seeing a white boy say "whats up N_____R" to another white boy.

This being a politically correct world as of late I decided to coin these idiot children as "Ethnically Challenged".
Face it, the entire saggy pants thing started in The Hood. Sad that Television has somehow led these kids to think it is good to dress and act like losers.