I am HUBCAP9 and all the information about my aquisition of these photos can be found in my entries in the Maslin Beach UFO item on the UFO CASEBOOK forum.

Please note that these first generation copies were not carefully looked after, and there are spots of emulsion paint and some brown spots caused by warm and damp conditions in the home where they were kept when I first saw them.

These photos show far more detail including beams of light used to stabilise and draw the smaller disc into the hull of the larger craft.

Please also notice the smaller craft in the photo 1a which is located roughly 40 degrees elevation to the right of the large craft. This is the small craft which eventually joins with the large craft.

Rather than retype all the details, please take relevant information from the topic entries on UFO CASEBOOK as I am a very slow one finger typer.

If you have any questions at all, please don't hesitate to ask. Eric Thomasson was a great human being who sadly died earlier this year and I believe it is about time that the debunking about this very important case is finally put to rest once and for all. 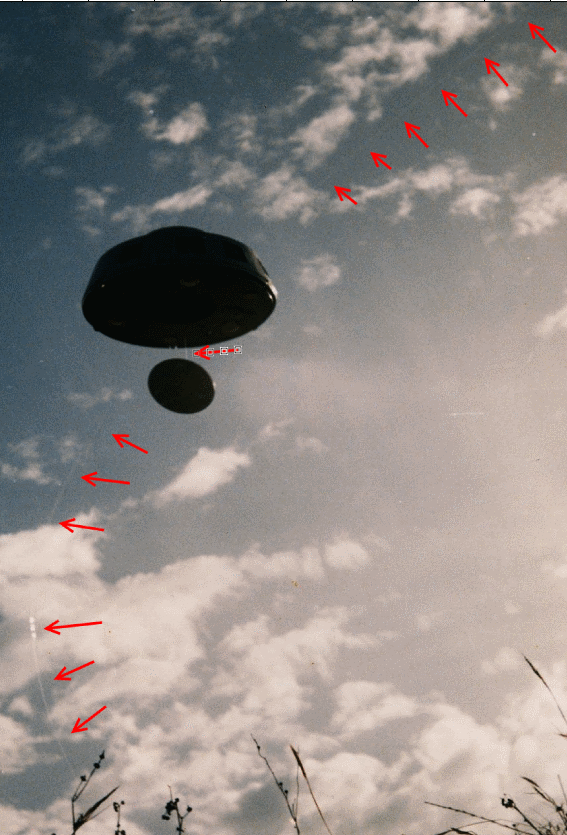 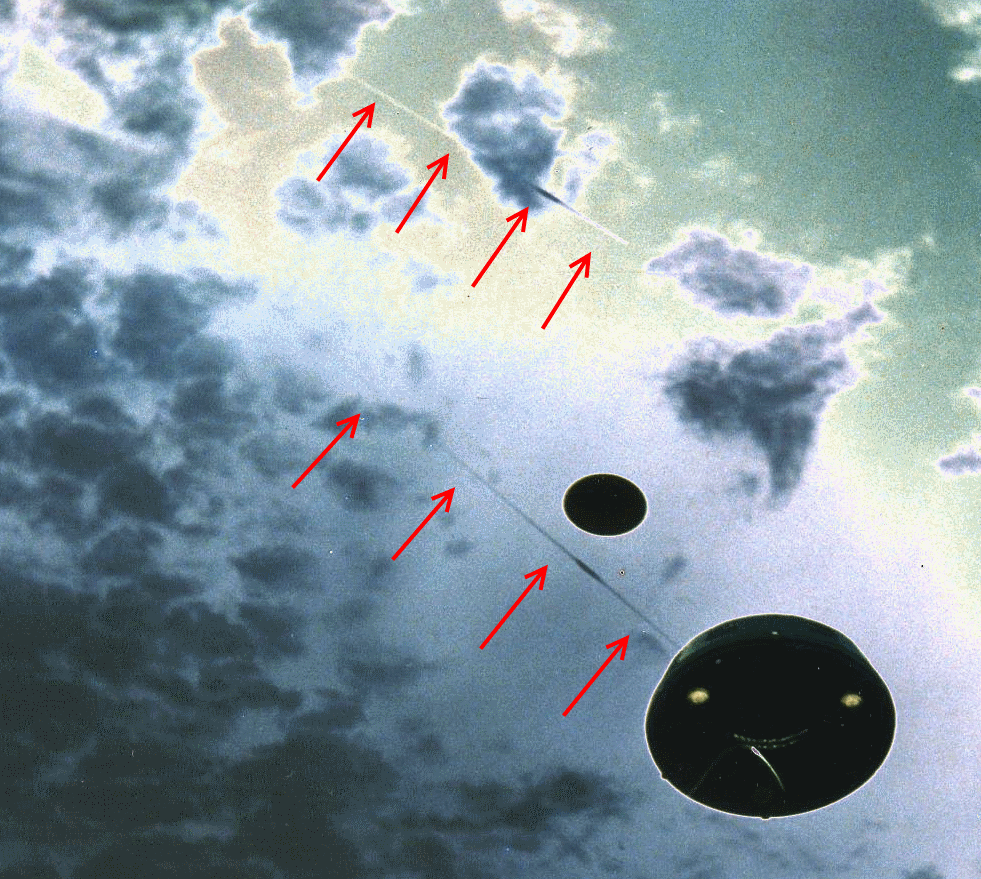 Pretty sure this one is real though... 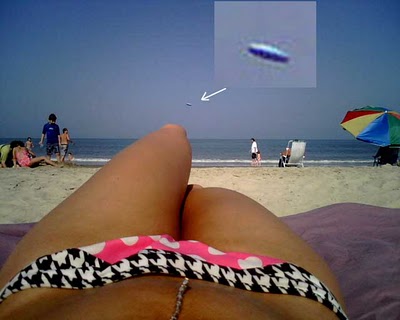 posted on Dec, 17 2012 @ 04:07 AM
link
The thread title made me expect the worst.
But now I've got strawberry ice cream spattered all over this computer. 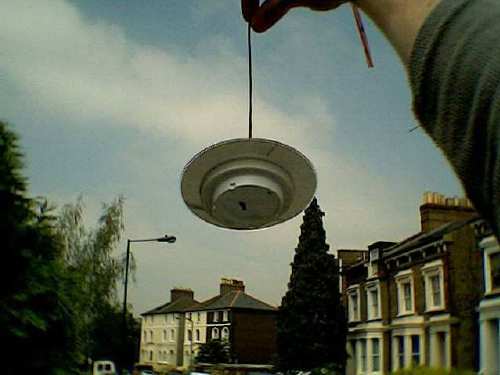 Unlike these latest photos, the case itself makes for an interesting read.


photoshop pants ...
maslins beach is a nudist beach in s.a
so why has she the pants !!!!

Originally posted by homeslice
Ha, just looks like someone throwing a small model of a ufo in the air.

Pretty sure this one is real though...

Well, that's not Maslins Beach, that's for sure. That girl has clothes on!

Originally posted by xpoq47
The thread title made me expect the worst.
But now I've got strawberry ice cream spattered all over this computer.


Strawberry ice-cream for you mate, coffee for me, what a mess.

posted on Dec, 17 2012 @ 07:03 AM
link
Yes it does look so incredibly amateurish....even the windows are different sizes.....of course, to a human perspective.
It looks like a model....but I am a little intrigued...
The little vessel approaching the other craft doesnt seem to be held up with any wires and if you consider how many times he would have had to change the "Models" to make it look like they are docking......
The "Landing gear" seems to have disappeared....retracted as per the story?
Apparently it was taken near sunrise at Maslins, the East is behind the beach, and due west is looking straight out to the ocean.
He first saw the craft come out of the ocean.....I would have thought at sunrise, that a more "Brilliant" light would have shone on the craft, nevertheless, it does appear to be a morning light....facing due west.
Apparently, because of the strong Sunlight, he had to change his position 4 times to take the photos...yes he is in different positions (as shown by the weeds in the foreground), and the sunlight seems to be constant.
Apparently the craft moved from the beach (remember it came out of the water) easterly to behind the beach, hence the photos into the sunlight...seems fair enough.
Apparently he used a Kodak S50.

Im not sure of this case, seems legit to those concerned, and there was no photoshop in 1993.
As I live in the same city as Maslins Beach (no not a nudey), I recall NO sensational news item, or national interviews, or money making exercise in relation to any UFO sighting at Maslins, then, and in the last 20 years.
The first I heard of this, was an ATS thread about Oz sightings.
So I doubt that this "hoaxer" did a particularly good job of pushing his hoax.....if indeed it could be considered one.
Be aware there are cliffs around the beach, with a car park up top, which often attracts people with binoculars and cameras, Hence why his picture of the ocean appears to be up high,..that because he is on the top of the cliffs.....


If the inference is that what is seen is some kind of support to hold up a number of different models then wouldn't this be able to be seen in all of the photo's ?

It would be useful if you were able to apply the same process to all of the pics and post.

As the marks aren't in a straight line, don't appear to touch the object and are present in other parts of the photo's could they simply be scratches or have some other cause ?

Or perhaps it was a "cosmic string".

posted on Dec, 17 2012 @ 09:55 AM
link
Thanks for sharing these. I've always been intrigued by these photos and the witness's story when I first saw them in '93. Myself being an avid photographer, I examined these with great interest.
My findings aligned with those made by other examiners that I've read about, which is aside from a few odd observations worthy of scrutiny, I'm very much still on the fence.
Things to consider when comparing the images with the witness statement;
Type of camera
Credibility of the witness
location/ time
physical evidence (photos in this case)

To keep this short I'll just touch on observations that would raise an eyebrow.

I concur with others finding it strange that the witness set his alarm for 5:45 am with intention to take sunrise photos of the local mine to enter into a photo contest in a magazine. The first photo was said to be snapped off at 6am. 15 minutes to get up, dressed, walk to the location (5 min.), determine that there was too much cloud cover to get a sunrise photo, so divert to the ocean side where the encounter took place.
Finally, in my opinion, the time of day looks a bit later than 6am March 10. But then, I don't live in Australia, and seasons are a little upside down there.

Camera was a fixed focus (infinity), point-and-shoot that uses 35mm film. It was loaded with 100 asa Fuji film. This means the film loaded was the popular (fine grain) film for shooting daytime good quality photos, with a huge field of focus. 400 asa, for example, has coarse grains, making the film more sensitive to light more suitable for low light scenes, but less quality (grainy).
In the first photo the object is in focus, the horizon and much of the background is blurred, shouldn't be. The object and background should be in focus.
However, looking at the first photo, it should be noted that in the distance just to the right, it was later discovered the smaller flying object can be seen approaching from the west. Interesting.

Other than that the other images agree with his story. When the object came over him, he slithered down the slope about 5 meters to better conceal himself. Now he is shooting toward the east, where the sun is beginning to peek over the slope from his position. He angles himself more to the north a bit because the sun was directly into his viewfinder. This caused major lens flare, (looks like mono-filament), and silhouette issue with the object being photographed, but probably the best that anyone could have done at that angle to the sun and with that camera.
In the last photo there was mention of a fine beam of light 'attached' to the smaller object to direct it in.

Evidence
Although there were photo editing software available then, (I used something called Magix if I recall), I could find no evidence of any photo tampering. Close examination does show that the photos had not been digitized but were printed straight from negative. The photos do exhibit damage due to poor handling.

Scale When examining photography I use many things to marry the claimed scale of the object that has been reported to what is visually captured on film.
This is a tough one because the field of focus for this camera would be about 4 feet to infinity.
The photographer estimates the object was about 2 kilometers away when it rose from the ocean, at first he thought it to be the conning tower of a nuclear sub! As it approached him he estimated the object size to be 40 meters!
Looking at the photos, before you mind knows it's size, gives you a pretty good idea of how big this thing 'might' actually be with comparison of surrounding objects, reflections, geometry of the object, where it lies within the focal plane and so on.
When I discovered his estimated size, my instincts took a stumble and I had to completely reevaluate each photo based on that. I just don't believe it's that big. Without object to ground shadow data it's hard to determine exactly. Big, yes...but 40 meters...mmm.
I will say I'm thoroughly convinced the object is a three dimensional object physically occupying the airspace in front of the witness, and not a photoshopped add-in.

He claims that after the last photo, the object sped away straight up, and he could feel water dropping down on him from above. Interesting thing for him say, something that a typical hoaxer might not consider.

So, I'm on the fence but really leaning to one side. I'm focusing more the witness, and on up-close study of the object itself presently. It's lighted internally, externally, very large, it could very well be an earthly creation...more acceptable to most when considered that way. Flimsy fishing line? The lens flares are identical, the curved one is the lens itself reflecting back on itself imho.

I haven't ruled out hoax. I don't however believe 'fishing line' at work here.
Remember, these photos have been handled pretty rough over a number of years. Scratches, fades, bleeds, folds etc., are everywhere.

To hold these objects straight and level in the ocean breeze near a cliff, you would need something rigid.
Consider these notes: (you'll have to use the slider below the photo) 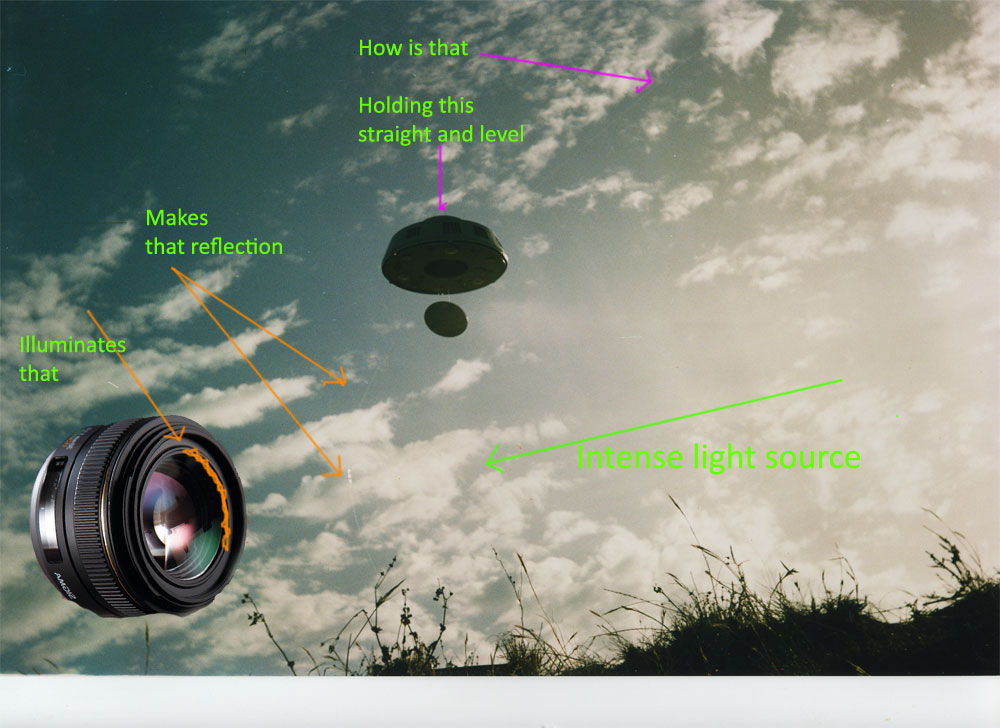 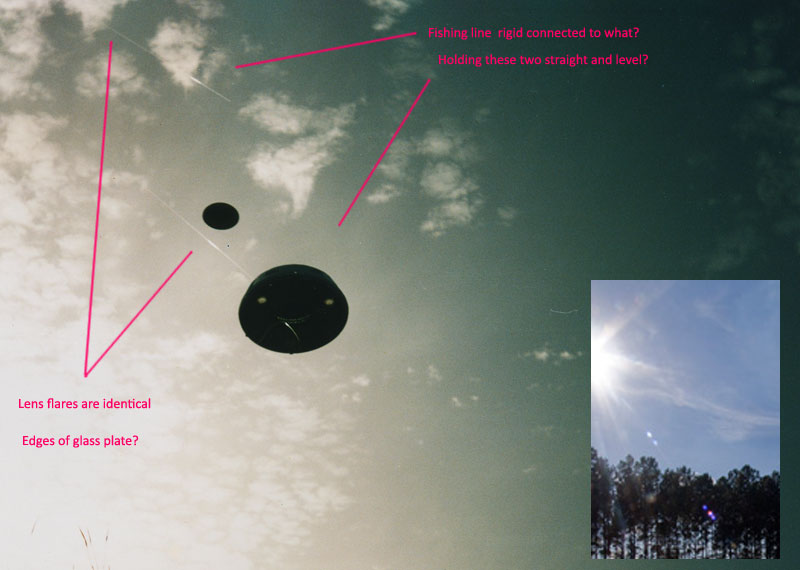 In the last photo, there was mention that the witness saw of a fine beam of light 'attached' to the smaller object to direct it in.


I'm feeling these could be a hoax or perhaps... undisclosed man made drones, but if so, why so publicly obvious?
But again, If it rose out of the ocean, being 40 meters in size, where's the other witnesses?
Either way, I can't support a fishing line theory.
edit on 17-12-2012 by Lonewulph because: (no reason given)

I can tell you how you see two fine pieces of monofilament line suspending an object... from the side... in bright sunlight. Doesn't even involve the invention of new physics.


I'd say those lines are jet contrails that just happen to be in the sky in the background. Other "streaks" look like glare.

As for the actual "UFO", my first blush opinion is that it looks fake, but I have no hard evidence to support that, except for the fact that it looks like it is close to the camera (only a few feet away).

posted on Dec, 17 2012 @ 12:53 PM
link
On second thoughts with these pictures, they're certainly not strings holding up anything here and I can quite believe that they're are "tears" in the photos which would make sense.

However, in saying that, if we are to accept the accompanying story as true, then these pictures are a case of too good to be true


I don't believe they are real.