"A major road tunnel has collapsed in Japan, trapping a number of vehicles and leaving at least seven people missing, media reports say." Taken from the BBC item

Mod Edit: Review This Link: Breaking Alternative News Guidelines -- Copy the Exact Headline
edit on 12/2/2012 by semperfortis because: (no reason given)

posted on Dec, 2 2012 @ 07:12 AM
link
OMG, Japan is suffering so much.
This has just become news here in the UK, although it looks like it happened yesterday.
Seems a major road tunnel roof has collapsed onto the vehicles in one of Japans longest tunnel. Fire started and when rescuers reached the scene, charred bodies were seen.
There is some criticism of the speed of arrival of the rescuers.
No reports of any earthquakes or tremors near the site of the tunnel.

Is it me, or when things go wrong in Japan it always seems to be something majorly wrong, be interesting to find out what caused it.

posted on Dec, 2 2012 @ 07:20 AM
link
That is EXACTLY why I have a "phobia" of driving through tunnels....
I wonder if it just wasn't time for it to fall; meaning that it probably had some infrastructure problems that had NOT been detected. Poor people, I feel very sorry for all that they as a country have had to go through....

posted on Dec, 2 2012 @ 08:27 AM
link
Besides being a tragedy, as any loss of life is under such terrible circumstances, the Sasago Tunnel collapse is also worrying because of what it might indicate.

While it's true that no earthquake activity near the collapse site has been reported internationally, the Japan Meteorological Agency (JMA) – which officially does quake monitoring and reporting for Japan, has a report of a magnitude 2.9 event on Dec 1, 2012:

You can access the above report on JMA's site at this link. (Note: the page is in English.)

If you want to follow quakes in Japan, then JMA is the best resource as they record even the smaller ones that often don't make it onto the pages of either (eg) the USGS or EMSC maps.

While a magnitude 2.9 quake is not large by any stretch, the event's epicenter was only 10 miles from where the tunnel collapse occurred. Viz this image I've prepared: 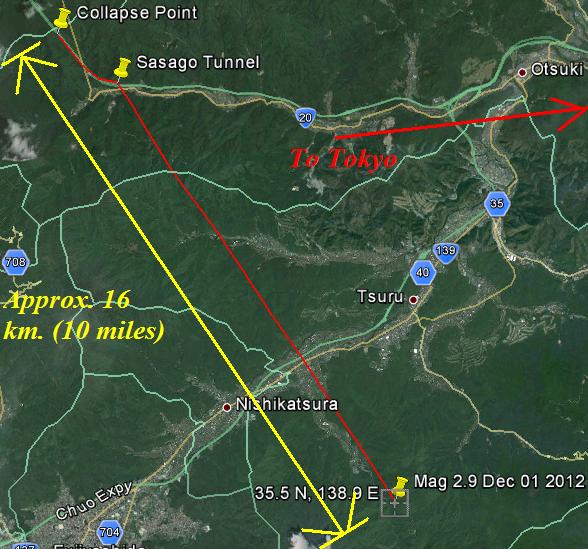 Now, while such a small quake shouldn't collapse a major tunnel, especially in Japan where they have many tunnels and are very good at engineering them, I'm wondering if this collapse is indicative of a tunnel that might have been weakened by previous events and failed due to the proverbial straw breaking the camel's back, so to speak.

The other possibility relating to tectonic movement is that there might episodic tremor and slip going on, which normally occurs at such a low level that it's not noticeable except with special instruments – meaning not just the usual seismos. It's done using Very Large Arrays (VLAs). This is how they track ETS in the PNW, for example.

In any case, an “unexplained” tunnel collapse in a known seismic region is always worth noting, just in case it might indicate something else is going on.


It looks similiar to the tunnel in Massachusetts...and by similiar I mean the upper tiles or cement ceilings falling down. Not sure if folks recall several years ago a woman was crushed while driving as one of the cement slabs fell on her car. The fasteners were the cause of the collapse of a few cement slabs...what a shame...thanks OP for the news...as some have said is this an omen of something worse to come? I live outside of Boston and frequent the tunnel and it leaks horribly due to be under some water. Funny thing is we have a much shorter tunnel that was put in way before my time (I'm 42) and it's never leaked.

You can notice the leaks more in the winter time due to freezing and it's quite shocking as a lot of the ice is so in your face ont he side of the walls. All tunnels leak but they don't tell you how much they should leak..
edit on 2-12-2012 by chrismarco because: (no reason given)


You could be right mate, not many details at the moment as it's still a search and rescue mission but from what I know the tunnel was built in the 70's, there was a landslide nearby which may have been responsible.

Additionally, the ventilation system had broken down, possibly as a result of this which didn't help matters.

posted on Dec, 2 2012 @ 09:28 AM
link
This is very tragic and what is really strange is I dreamed last night that there was an earthquake in Japan. I awoke and went straight to check the news but couldn't find any information, only coverage of the tunnel collapse. I hope my dream was just a dream and I have never really had anything happen lime this before but the feeling I had when I awoke was a very strange feeling, almost like my dream wasn't a dream but more like watching the news.

Will remember to check what I do next time.