posted on Nov, 27 2012 @ 12:28 AM
link
I was in the west end of Arkansas today, heading east. I noticed a flatbed truck heading west, carrying an armored vehicle on the back. My first thought was that it was an M-1 Abrams. I was quickly disabused of that notion as I got a better look at it (unfortunately he went by too fast to get pics). The chassis was shorter than an Abrams chassis, the turret was shorter than an Abrams turret, the side panels were angled out a little more, so there was very little gap between the turret and the chassis, and the only weapon on the turret was the main gun, which appeared to be a 120mm. There were no protrusions at all on the turret that I could see as he went by.

Anyone have any ideas what I saw? I looked at some foreign types, and the closest to what I saw was the Japanese Type 10, but the side panels of the turret were angled at about 45 degrees it looked like, and the top of the chassis was straight, without the bump on the back of the Type 10.


Maybe it was a MBT-70. There are still quite a few examples out there.

It was a failed armor program between the US Army and the Bundeswehr if I remember correctly.


Close, but the turret looked a LOT like an Abrams turret, but totally clean except for the main gun, and the back of the turret didn't extend back like the Abrams does.

Similar to the M1 Abrams, but with a auto-loader and three man crew. And it is smaller as well.

I would post pics, but I don't have that knowledge down to pat.

Much of the current research into the next gen armor is based upon wheels rather than tracked. 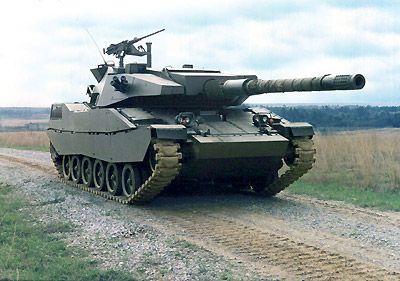 The Stingray light tank was originally developed in the later part of the Twentieth Century as a light tank design which would have the firepower of a main battle tank while having excellent mobility. Of course the tank was extremely lightly armored but was otherwise an excellent design.

It was produced by produced by Textron Marine and Land Systems Division which was formerly Cadillac Gage. While the light tank was not operated by the United States Military, the design was purchased by the Thai military. There was an improved version of the Stingray know as the "Stingray II." It had improved mobility and armor.

If it was maybe it was headed to a Military museum?


It sounds kind of like those Chinese tanks.. What are they called type 99 or something?


I was just thinking about that Tank, but couldn't remember the name other than it started with a "S".

3/73 Cav (82ABN) tested these things for a bit and everyone was impressed with them. But the Airborne Board did not like them as they took up to much space. They were better than the Sheridan by far.

I was stationed at Ft. Knox back in the 80's and they had all sorts of prototypes as displays on the base.


Closer but still not right. The chassis was short enough that it looked like I'd be able to look across the top of it (I'm 6'1), and the turret was pretty flat. I started thinking unmanned after awhile, because it looked short enough that a crew would be a tight fit.


I remember reading about a few light tanks variants developed for Airborne units. There were quite a few prototypes tested in the 80s and 90s. If it's not an older museum piece then it's a new prototype IMO.

I could swear I've seen this one Heff at the Aberdeen proving grounds over in their outdoor armor museum...


It's been a long time since I've researched tanks - as my general feeling is that knowing them is secondary to the fact that running and hiding keeps one alive longer than identifying any that might be shooting at you.

But I do remember an article that I read a year or two back that discussed stealth tanks - which all had the telltale signature of extremely angled and beveled chassis. I'm trying to dig up some of those pics now.

You have a good team working on it so far! I'm definitely going to keep an eye on this thread. I hope you come to some conclusion!


This seems to fit the bill on the height of the hull. It also came with two variants of turrets.

I remember them testing these during my time at Knox, but nothing ever came out about them. They just ceased to be at some point.

How old was the paint job on this mystery vehicle and what was its camo scheme? That could help pinpoint things.

Originally posted by Hefficide
reply to post by SLAYER69


It's been a long time since I've researched tanks - as my general feeling is that knowing them is secondary to the fact that running and hiding keeps one alive longer than identifying any that might be shooting at you.


Tankers refer to Grunts, in a dark humor sort of way as...


Make the hull Abram sized, and just a little taller, and that's the hull. I would say it was within 3/4 size of an Abrams height wise. Length and width looked really close to an Abrams. The turret was about 1/2-3/4 height of an Abrams turret.

The paint looked brand new, it was desert brown, like the Abrams are. The whole thing looked like it had just rolled out of a factory and was heading to a testing ground.
edit on 11/27/2012 by Zaphod58 because: (no reason given) 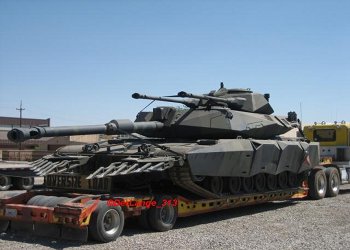 
That's really close there, minus the extra protrusions on the turret. The sides of the turret didn't look like they came back up, but he was doing interstate speed going the other way, so I didn't get more than a quick look at it, so they might have. Take the top part off, and the front part off, and that might be what it was.

I've never seen a tank turret without anything but the main gun on it, until this one. It didn't have ANYTHING extra sticking up off it.
edit on 11/27/2012 by Zaphod58 because: (no reason given)