Pro-lifer DesJarlais pressured mistress to get an abortion

A pro-life, family-values congressman who worked as a doctor before winning election as a Tea Party-backed Republican had an affair with a patient and later pressured her to get an abortion, according to a phone call transcript obtained by The Huffington Post.

The congressman, Rep. Scott DesJarlais of Tennessee, was trying to save his marriage at the time, according to his remarks on the call, made in September of 2000. And, according to three independent sources familiar with the call and the recording, he made the tape himself.

Of course he had something to say about this scurrilous attack on his character:

DesJarlais, who was provided a copy of the transcript by HuffPost, did not deny its contents, but in a statement released through his campaign characterized it as just another sordid detail dredged up by the opposition. "Desperate personal attacks do not solve our nation's problems, yet it appears my opponents are choosing to once again engage in the same gutter politics that CBS news called the dirtiest in the nation just 2 years ago."

I'm confused - is he saying that electing people with the moral character of a tomcat and a penchant for hypocrisy in regard to their "deeply held personal beliefs" will help solve the nation's problems??


*Disclaimer: I don't think his being TPM backed has any relevance what so ever and don't appreciate that the author of the article tossed it in there. Hypocrites exist everywhere in humanity they are not exclusive to one group over another.

Here's the transcript of the call.


"You told me you'd have an abortion, and now we're getting too far along without one," DesJarlais tells the woman at one point in the call while negotiating with her over whether he'll reveal her identity to his wife. They then discuss whether he will accompany her to a procedure to end the sort of life the congressman now describes as "sacred."

"You told me you would have time to go with me and everything," the woman complains.

The two bicker over when they can meet to hash out a solution, and they make clear the nature of their relationship when DesJarlais says delaying a resolution isn't fair to his wife.

"This is not fair to me. I don't want you in my life," the woman says.

"Well, I didn't want to be in your life either, but you lied to me about something that caused us to be in this situation, and that's not my fault, that's yours," the doctor responds.

"Well, it's [your] fault for sleeping with your patient," the woman fires back.


I suspect the TP gets mentioned because they also tend to espouse "family values", and did specifically endorse desJarlias.

the small govt/less tax message of the TP has been overwhelmed by the other aspects of conservatism that it has attracted.

posted on Oct, 10 2012 @ 05:09 PM
link
If men could get pregnant, I doubt abortion would ever have been an issue in the first place. But I do find this funny, even though it isn't. Just goes to show, right?

posted on Oct, 10 2012 @ 05:11 PM
link
Of course he did. He is a member of the far Right Christian horde, where honor means nothing and being a hypocrite is not only accepted, but considered righteous.

I challenge the Right wingers here to list one honorable, non-hypocritical and honest elected Right wing official. Just one.
edit on 10-10-2012 by pajoly because: (no reason given)


They did endorse him and while I don't agree with the TPM's particular brand of 'Family Values' I would consider this a situation where the Representative betrayed them and not that the movement itself is hypocritical. To be clear though, I strongly disagree with the movement's anti-choice stance.
edit on 10-10-2012 by Kali74 because: (no reason given)

posted on Oct, 11 2012 @ 07:27 PM
link
Pro-life, pro-family, pro-marriage, anti-gay, and anti-abortion Congressman; he's a medical doctor who has been caught having unsafe sex with his patients, and now pushed his mistress to have an abortion. On top of that, during his divorce he "dry fired" a firearm at his soon-to-be ex-wife. 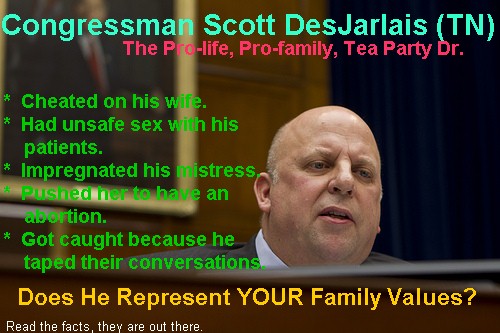 He is also a Tea-party backed Republican. While I can't blame the TPM for this man's behavior, what I would like to know is why the Tea Party has become so silent about him? Why aren't they out there leading a recall against him, since he so clearly defies their tenets? Or do they ignore facts when it suits them and it's their rep being called into question? The TPM has led a holy crusade against Democrats who have engaged in a fraction of the amoral behavior of Scott DesJarlais, yet are made out to be the antichrist by them.