The Mona Lisa Foundation’s mission is to make Leonardo’s ‘Earlier Mona Lisa‘ known and loved in its own right, as much as the version that hangs in the Louvre Museum. The Foundation tells the remarkable story of this 500-year-old masterpiece, mobilizes art historians, scientists, forensic artists, and other experts to prove the ‘Earlier Mona Lisa’s‘ authenticity, and Leonardo’s exceptional skills. Read the book that tells the whole story. Examine the painting’s details with a magnifying glass. Compare the two portraits set next to each other. Enjoy Leonardo’s genius!

posted on Sep, 29 2012 @ 02:22 PM
link
They make the claim that Da Vinci painted an earlier (by 10 years) version of the famous Mona Lisa. Side by side comparisons certainly make the case for them. 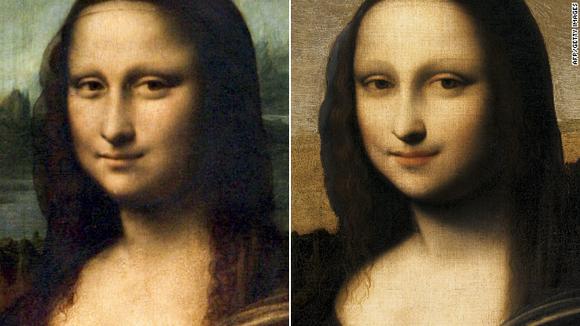 As seen here, the paintings are stylistically identical, and contain even a similar background (look at the 's'-curve roadway over the subject's right shoulder), the horizon line, etc.)

A second link at the site above, makes side by side comparison easy.

monalisa.org
(visit the link for the full news article)
edit on 29-9-2012 by Blackmarketeer because: (no reason given)

posted on Sep, 29 2012 @ 02:27 PM
link
Wow! Leonardo was committed to make a master piece! I like the Louvre mona lista The old one looks very smily

does it really take 5 years to paint a portrait of a person.

Looks like Mona was fond of the pasta tho...Kinda gained a little poundage...


This is the "Isleworth Mona Lisa", and AFAIK not considered to be a hoax. You're not referring to the Prado Museum's copy of the Mona Lisa are you? Neither are not considered "hoax's", as they are authentic paintings of the era, although the Prado Mona Lisa was determined to have been done by another painter working in tandem with Da Vinci.


(Reuters) - A Swiss-based art foundation on Thursday unveiled what it argues is Leonardo da Vinci's original "Mona Lisa", backing its claim with evidence from a U.S. research physicist, a forensic imaging specialist and a top Italian expert on the artist.

GENEVA — What could be an earlier version of Leonardo da Vinci's "Mona Lisa" was unveiled in Geneva along with research hinting the piece was indeed the work of the Italian master, although some experts said the claim was unlikely.

The foundation gathered experts in Geneva to testify to the probability that the portrait was painted but left unfinished by da Vinci about a decade before he completed its famous "sister", now on display at the Louvre in Paris. 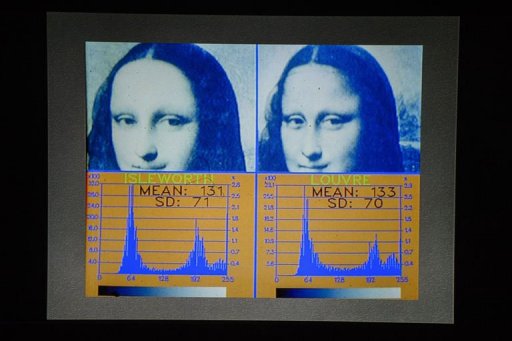 It is still to be determined the exact nature of Da Vinci's involvement in this, to be sure this will rock the art world with experts on both sides arguing over it.

posted on Sep, 29 2012 @ 03:00 PM
link
They said on the news last night that it was a hoax due to several factors, one of which being that Leonardo only painted on wood and this copy is painted on canvass. The brush stroking techniques and the way he layered light were not evident in the copy as well. Also, the details are not as intricate (particularly the clothing and the background scenery).

posted on Sep, 29 2012 @ 03:10 PM
link
"Hoax" implies a deliberate act to deceive. Even the skeptics aren't calling this painting a hoax. They are skeptics that Da Vinci himself is it's painter.

The art experts who debate this have made their contentions known;
Is This An Early 'Mona Lisa'?

"Martin Kemp, an Oxford University professor and Leonardo expert, wrote in an e-mail that 'the reliable primary evidence provides no basis for thinking that there was an earlier portrait of Lisa del Giocondo' — referring to the subject of the painting that's known as the Mona Lisa in English and La Joconde in French.

"Kemp questioned the 'debatable interpretations' of source material about the Isleworth painting, and said that scientific analysis cannot categorically deny that Da Vinci didn't paint it. However, he added: 'The infrared reflectography and X-ray points very strongly to its not being by Leonardo.' "

But there are experts who do believe this to be the work of Da Vinci, albeit the painting had been modified, painted, or touched up by others (such as the neck area, and the background). I'd prefer to keep an open mind about this until a consensus is reached.

The shadows under the nose don't look like a similar style, and the eyes are different. The background doesn't look right either...

I think someone is trying to pull a fast one.... It would be like printing money...

posted on Sep, 29 2012 @ 03:42 PM
link
she still looks like a proper slaphead though.
(slaphead=big forehead)
I think he gave her too big a forehead in both paintings.

Originally posted by Silcone Synapse
she still looks like a proper slaphead though.
(slaphead=big forehead)
I think he gave her too big a forehead in both paintings.

You can blame fashion for that...some women even plucked their hairline in order to increase the size of their foreheads. It is also the reason why nuns wear wimples, because the forehead was considered to be part of a woman's allure in the middle ages. A respectable woman kept her's covered by veil.
edit on 29-9-2012 by Biliverdin because: (no reason given)

The lack of puffiness under her eyes makes for a wonderful difference where she looks prettier and almost more like someone you might know than the more famous 'original' version.

Good that you have such convictions. Now prove it.

does it really take 5 years to paint a portrait of a person.


it takes that's long if you make every little bit of the painting 100% perfection, that's y paintings nowa days suck horribly bcuz not many people try

The forehead section, upper nose looks very amateurish/pathetic...and also down at the decollete, something doesn't look right. To me, it looks like a fake - DaVinci was better than that. Look at the forehead, eyebrows etc...
edit on 29-9-2012 by flexy123 because: (no reason given)

posted on Sep, 29 2012 @ 08:39 PM
link
It's clearly a mystery as to whether this is a Da Vinci. Give the experts more time to analyze it, now that it has been removed from it's vault and re-introduced to the world, with luck it will accelerate experts opinions, for or against.

According to the host group, the background had been overpainted by a later artist, as well as part of the neck. The claim is that Da Vinci painted the head and the rest was completed by later artists.

Alessandro Vezzosi, director of the Museo Ideale Leonardo da Vinci, said the painting was intriguing but needs further study. He declined to line up behind the foundation's claims that it was truly a "Mona Lisa" predecessor painted by da Vinci.

"The Isleworth Mona Lisa is an important work of art deserving respect and strong consideration — as well as a scientific, historic and artistic debate among specialists rather than a purely media interest," he said.

from Isleworth Mona Lisa conjures up an art world mystery

Scientific testing have determined it's from the proper era (early 16th C.), but the rest is up to a more subjective critique.

The foundation also claims there are historical claims from that era that Da Vinci was known to have painted two Mona Lisas.

Ever since the 16th century, several historical sources suggest that da Vinci painted two "Mona Lisa" versions. One was of Mona Lisa Gherardo around 1503 that was commissioned by her husband, Francesco del Giocondo, the foundation said. Another — the one in the Louvre — was completed in 1517 for Giuliano de Medici, da Vinci's patron. That theory fits with da Vinci's tendency at times to paint two versions of some of his works, like the Virgin of the Rocks, the group said.

They also claim evidence and acknowledgement that the head was the part painted by Da Vinci and the rest by others;

However, the foundation acknowledged that the "Isleworth Mona Lisa" remains unfinished, and that da Vinci didn't paint all parts of the work. Still, the group pointed to newly discovered evidence in 2005 from Heidelberg, Germany, that suggested da Vinci was working on at least the head of such a painting in 1503.

In 2005, an expert at the University Library of Heidelberg discovered a margin note in the library's collection that established with certainty the traditional view that the sitter was Lisa. The note, written by Agostino Vespucci in 1503, states that Leonardo was working on a portrait of Lisa del Giocondo.

The group claims this indicates Da Vinci was known to be painting at least the head of the portrait in 1503, whereas the Mona Lisa del Giocondo was (estimated to be) painted in 1516.